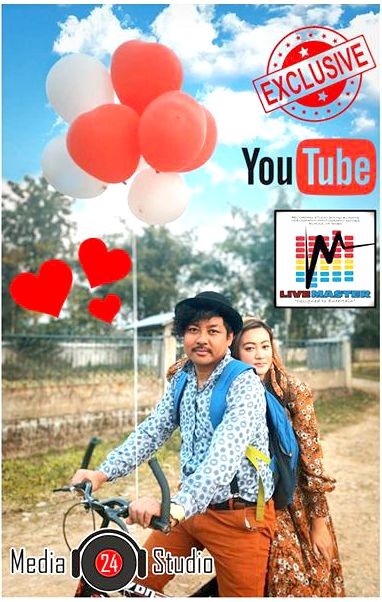 The ‘Nagamese Comedy Love Song’ was well received by fans in Nagaland as well as outside the state.

“Response of the viewers was just awesome from the first day. We received lots of love and regards form all over the country. I was stunned to see the comment section on my YouTube channel where many fans responded and spoke their heart out and encouraged me.

I was deeply moved and enlightened by those gestures and love that has been shown to me by my fans and well wishers without whom it would have been an impossible journey for my music career,” Sunep Lemtur told The Morung Express.

Sharing his reaction on the milestone, Sunep said “I was literally in tears and overwhelmed”

He thanked God, his co-singer and actor Mhale Keditsu and videographer Tony Assumi (Livemasters) for his excellent job. He also thanked his fans for their love and support.

On being asked how the idea for the music video came about, Sunep said, “One night I was humming some melody lines with my guitar. Suddenly a strong imagination drove me back to 70’s trend, where I was reminded of those funny romantic movies. That’s when I began to write this particular song: ‘Mintu Loves Pinky’, and I wanted to project the song as a family entertainment video.”

The rest, as we know, is history. Set in 1997, a love-struck Sunep is seen wooing his lady love Mhale  with cheesy Nagamese lines in the music video.

“Since the rendition of the music was done in 70’s style we decided to organize the whole set according to the theme. It took me more than a week to come up with the story lines and the idea for the costumes,” Sunep said.

My core aspiration was to give a glimpse of those flashback memories, especially to our fathers and mothers so that they could relate to their past romance and reflect their profound memories, he added.

Everyone loves stories with happy endings. The team had a tough time in their post-production to decide whether the story would go on with a happy ending or a sad ending.

“Finally we went on with the happy epilogue. And it worked well,” Sunep shared.

For fans who are eagerly waiting for the next project from Sunep, there is good news.

Rev Fredricks of Dreamz Unlimited will be featuring in the upcoming video, he revealed.

“Since last year people were asking me to collab with him, so we finally came up with the full family entertainment video project,” he added.