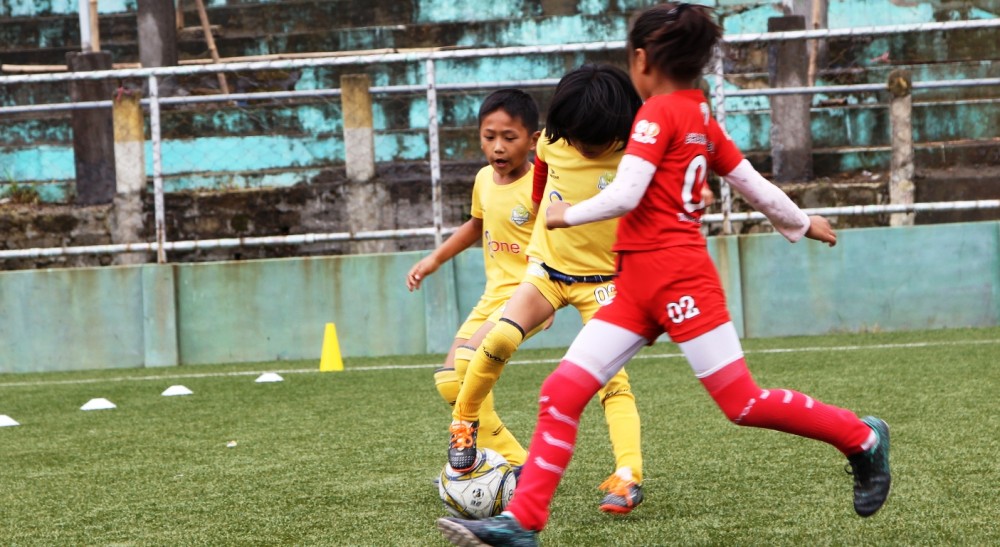 Players in actions during the Golden Baby Leagues. (@IndianFootball/Twitter)

New Delhi, October 25 (IANS): Amidst all the debates over gender equality, a remote village of Mizoram, Champhai -- some handshaking distance away from the Indo-Myanmar border -- is silently taking a firm stride forward towards establishing gender equality through Golden Baby Leagues.

The Golden Baby Leagues project is a long-term player development initiative of All India Football Federation (AIFF) that aims to grow a new generation of players, boys, and girls, who start playing football from a very young age.

"We started the Golden Baby Leagues with mixed-gender matches and it had a magical response from parents in the locality. At the end of the season, you won't believe, the highest scorer was an 8-year-old girl," Prakhar Soni said as per an AIFF media release.

The Young Legends League Golden Baby Leagues, the brainchild of 8one Foundation, was one of the first Baby League programs across the country. Over the last two years, they had unearthed some talented kids who were, in the process, roped in by the likes of Bengaluru FC, Reliance Foundation Young Champs, Bhaichung Bhutia Football Schools.

"Champhai has produced national level players like Robert Lalthlamuana, Lalruatthara and many more. That's one of the main reasons why we zeroed down on this district. Mizoram's grassroots football structure has been exceptionally robust. The District Football Association of Champhai has provided us with their database so we could kick-off the YLL Golden Baby Leagues program," Soni stated.

The foundation has also signed a 10-year-long MoU with Mizoram state football association in order to kick-off the project which provided them with the opportunity to flag off the same in Champhai.

The matches are organised on Saturday so that the academic curriculum of the kids is not affected.

"Creating a footballer is not our solitary target. We have always stressed on the holistic development of the kids as well as others who are part of the entire project. We appoint senior boys or girls as referees so they can hone their decision-making as well as technical skills," Soni said.