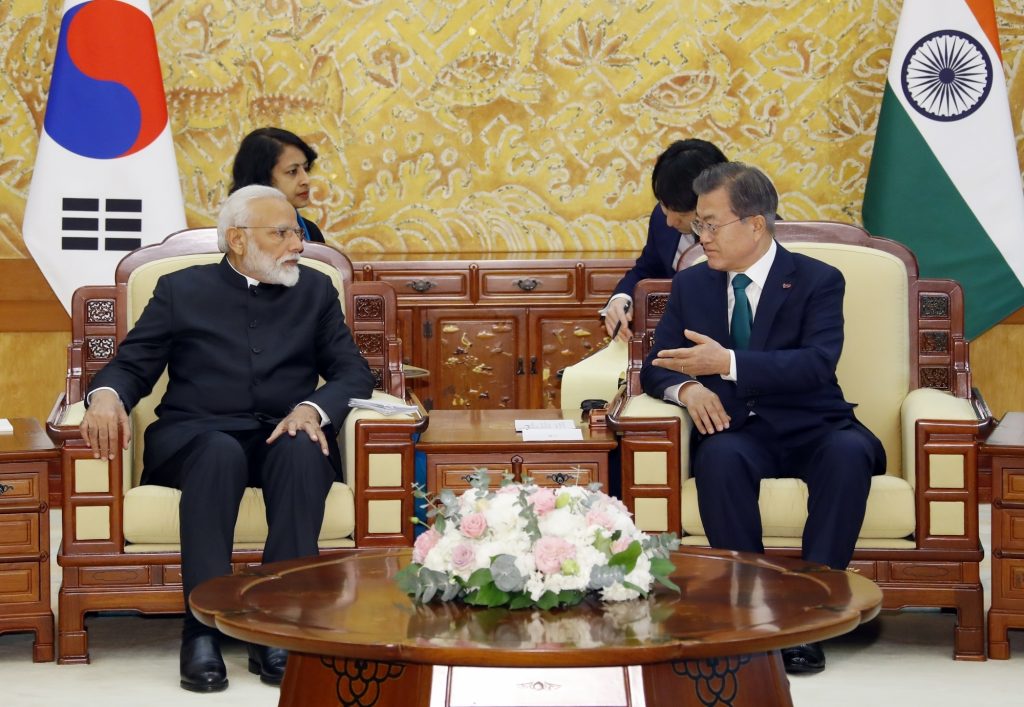 New Delhi, Octòber 30 (IANS) South Korea, which occupies an important position in Asia due to its technological edge and global competitiveness, may influence the Indian model of governance according to a report being prepared by a BJP team.


"Deeply influenced" by the South Korean model of governance, the BJP team is preparing a comprehensive report to be handed over to the Prime Minister Narendra Modi about the economic and political journey of the south-east Asian nation and its resilience to withstand the global economic slowdown.

Members of the BJP delegation, which returned from South Korea after a week-long visit, told IANS that they were surprised to see that a poem 'Lamp of the East', written by Rabindranath Tagore, is still being taught in South Korean schools, though the Nobel laureate never visited that country.

The head of the BJP delegation, P. Murlidhar Rao, told IANS: "We are in the process of making the report about our visit to South Korea. The report would dwell on reasons as to how that country became an economic powerhouse, and withstood the global meltdown. We need to learn a lot from that country. The passion for education among the people there is quite remarkable."

He said the BJP team held meetings with the government and opposition leaders during their visit from October 14-19. "We met intellectuals, experts on India-South Korea relations, groups working on trade-related issues from various business and industry associations and exchanged social, economic and cultural ideas."

The BJP delegation also visited the Dongkuk Steel Plant in the city of Busan. It imports steel from India, and after processing through its improved technology, turns it into sunmica sheets, colour steel plates and then exports them to other countries", Murlidhar said.

Dr Anirban Ganguly, Director of Dr Shyama Prasad Mookerjee Research Foundation, who was also a part of BJP delegation, said, "South Korea holds an important place for India when it comes to technological and industrial development. Keeping in mind pre-eminence of Asian culture, politics and economy in the 21st century -- called the Asian Century -- this trip was very significant as South Korea is going to play an important role in Asian dominance on the global map in this century."

"We travelled by roads and saw South Korea's industrial hub," said Ganguly, adding that South Korea has seen many ups and downs in its journey through the years.

He said it is inspiring to note how South Korea managed to continue developing even after its economy nosedived in 1990.

"South Korea has turned the border areas with the North Korea as a tourist zone, a new concept of tourism development in the country," said Ganguly.

"They wanted to know what led to BJP's bigger victory in the recent Lok Sabha elections and how Modi government emerged more powerful after the elections," Ganguly further said.

He said he told the Korean think-tank about India's vibrant democracy and increasing participation of youths in the electoral process.

Modi government, after coming to power in 2014, has made efforts under its 'Act East Policy' to cultivate extensive economic and strategic relations with the nations of south-east Asia in order to bolster its standing as a regional power.

According to a report, bilateral trade between India and South Korea has reached $20 billion, which was only $16 billion in 2016. Both the countries have set a target to increase bilateral trade to $50 billion by 2030.