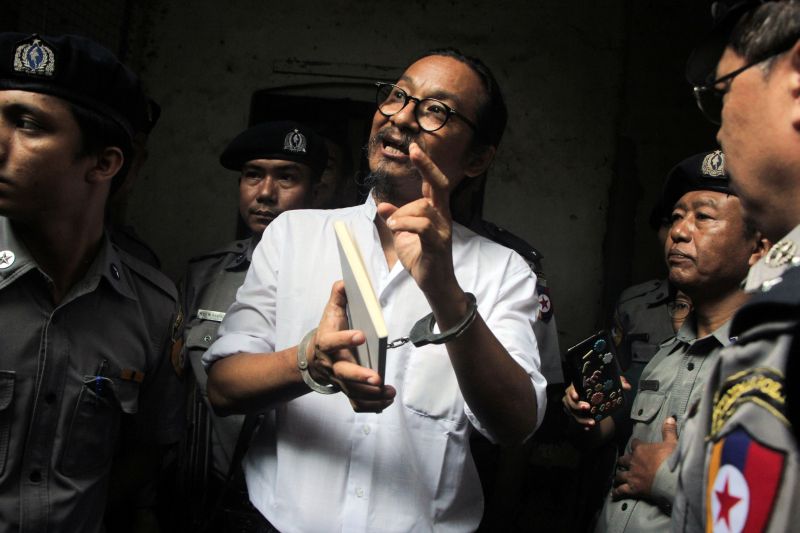 Filmmaker Min Htin Ko Ko Gyi is escorted out by police after a court hearing in Yangon, Myanmar on August 29. (REUTERS Photo)

YANGON, August 29 (Reuters): A Myanmar court on Thursday sentenced a prominent filmmaker to one year in prison with hard labour for Facebook posts that criticised the military.

Min Htin Ko Ko Gyi was arrested in April and accused of breaking a colonial-era law that bans statements that could cause a soldier or other service member "to mutiny or otherwise disregard or fail in his duty".

His Facebook posts criticised the military's role in politics and the country's 2008 constitution, which was drawn up by the former ruling junta and which civilian leader Aung San Suu Kyi is attempting to amend.

Speaking outside the court, Min Htin Ko Ko Gyi told reporters he had expected the verdict.

"Please, don't worry about me, I'll be back," he said. "I also want to urge everyone to march together vigorously for amending the constitution with our leaders".

Although Suu Kyi took power after a landslide election win in 2015, the charter reserves key political roles for the military, including a quarter of seats in parliament.

Her ruling National League for Democracy party has proposed gradually cutting the number of military representatives in parliament over a period of 15 years.

Government spokesman Zaw Htay said he could not immediately comment on the case.

"His writings do not comply with the characteristics of the section he was charged with," San Aung said. "It didn't cause mutiny or disrespect within the military".

According to the Assistance Association for Political Prisoners human rights group, 161 people are in jail or on trial in Myanmar on what the group says are politically motivated charges.

Maung Saungkha, an activist with the human rights organisation Athan, said the sentence was a "harsh blow to the freedom of speech in Myanmar".

He urged the civilian government to use its overwhelming majority in parliament to revoke laws which "clearly violate the right of free expression".