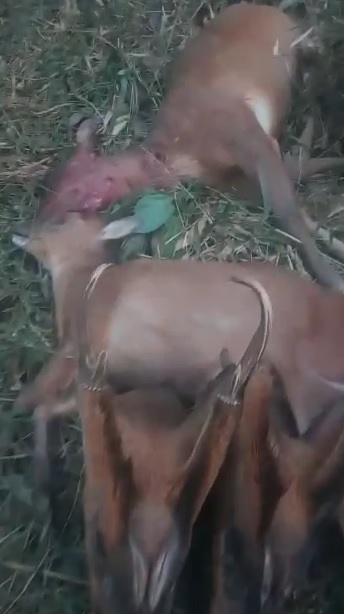 A screengrab from one of the videos which showed wild animals killed during an apparent hunting expedition, which according to the person in the video, will go on for one week.

Amidst the lockdown due to the COVID-19 pandemic, viral videos of hunters flaunting their preyed animals has drawn the ire and contempt of the people, prompting heated debates in social media platforms. When the world over is endeavoring towards conservation and protection of animal species and its habitats, these videos have projected the state in a bad light and serving as a further encouragement unless checked.

In one of the three videos, people were seen gathering around a large slain stag with their baskets, probably to share the flesh, while in another video, a large python was seen being carried by a man in a bike, and some hunters flaunted their preyed animals killed in two days of their one week hunting expedition in the third video.

One person taking the video could be heard and seen describing their event of the hunting as (roughly translated from Nagamese) “we are observing lockdown festival. We will kill the animals that comes our way. We are staying here for one week, and in two days we have killed these animals. We are near a river and we will update more.”

‘Unfortunate and sad’
A wildlife conservation activist and founder of the Nagaland Wildlife Biodiversity Conservation Trust, Bano Haralu was disappointed that such callous things are happening in the state.

“When people in the world are observing the wonder of nature and beholding the beauty of creations in their own surroundings, it is unfortunate that such ‘callous’ things are happening” opined Haralu.Recalling that Nagas have revered nature and all living things in the past, she stressed on the importance of conservation of wildlife to maintain ecological balance, and added that Nagas have still a long way to go.

“They don’t realise that they harm their own environment,” she said and added it is time to turn observation and curiosity into knowledge instead of ending the lives of the animals.

One video traced, investigation going on for other two
Talking to The Morung Express, District Forest Officer who is also the Warden and incharge of Wildlife Crime Bureau, Tokaho Kinimi informed that the first video of the wild stag which has been in circulation since April 17 (Friday) has been traced to Nihoshe village under Aghunato sub-division.

In this regard, he said a case will be filed against the persons in the video under the Wildlife Act 1972 and penalized accordingly.

Kinimi said investigation has started with all available means to trace, if not the mobile number, the people who are in the video. As per its sources, the video of the hunting expedition, he maintained didn’t ‘likely’ happen within the state but outside the state. However, he said the concerned counterpart has been informed and investigation is on to trace the people.

On the video of the python, Kinimi said, the location of the video is still uncertain.

No one can get away
The investigation, he informed will be based on circumstantial evidences and added that posting the video itself is enough evidence against them to the crime. If the culprits are caught, he said, they will be penalized under the Wildlife Protection Act 1972 and the severity of penalty will be according to the species of the animals they have killed.

“People are happily recording and posting the videos without knowing the consequences. They do it out of ignorance and to show off” said Kinimi. He also asserted that no one can get away it, as the law is strict for wildlife crimes.

He also stated there has been an increase of hunting incidences during this lockdown owing to many factors. One, he viewed could be that people  are stuck at home for so long and want to eat meat.