New Italian coalition allies have mutual foe, but little else in common 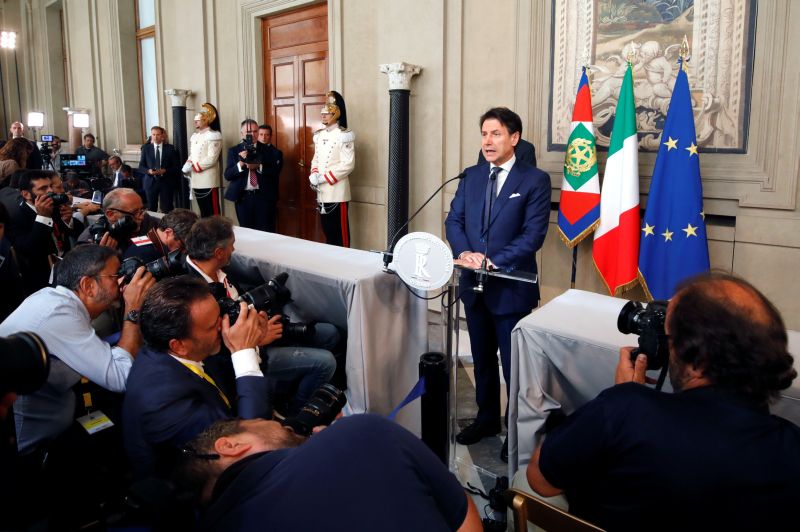 ROME, August 29 (Reuters): The ancient adage 'my enemy's enemy is my friend' has been a staple of pragmatic statecraft throughout history and it will be the cornerstone of a new Italian coalition that looks set to take office next week.

Once bitter adversaries themselves, the anti-establishment 5-Star Movement and centre-left Democratic Party (PD) have been thrown into each others arms by a mutual foe -- the far-right League and its populist leader Matteo Salvini.

But beyond this shared enmity, the 5-Star and PD have few points in common, suggesting their alliance will struggle to survive or give the eurozone's third largest economy the deep-seated reform and political stability it so badly needs.

"It is not going to last. The cracks are already there, so the foundations of this building are very weak," said Francesco Galietti, head of the Policy Sonar risk consultancy and a former finance ministry official.

Italy's president gave Prime Minister Giuseppe Conte a mandate on Thursday to try to form a new coalition in the wake of the League's shock decision to abandon its 14-month-old alliance with 5-Star and seek early elections.

Stung by what it saw as betrayal and keen to avoid a return to the polls, 5-Star has agreed to govern with PD, which is in the process of rebuilding after a string of election defeats. But the decision has caused deep unease within both camps.

"A combination of weakness within the Democratic Party and the profound differences with 5-Star will not bring anything good to Italy or the party," former industry minister Carlo Calenda said on Wednesday, announcing he was quitting the PD.

5-Star senator Gianluigi Paragone has also vowed to quit his party over the alliance. His move exposes another significant weakness for the new coalition -- its numbers in parliament.

Without Paragone, 5-Star and the PD will fall four seats short of an absolute majority in the upper house Senate, meaning they will need the backing of the far-left LEU party as well as possibly from some unaffiliated senators to stay afloat.

While such support is likely to be forthcoming in an initial confidence vote that the government will need to take office, it could become a fatal flaw when bills regarding particularly divisive issues like immigration get put before the house.

Adding to the problems, both the leaders of 5-Star and the PD, Luigi Di Maio and Nicola Zingaretti, do not have full control over their disparate lawmakers, leaving them exposed to possible ambushes in every parliamentary vote.

"A thin parliamentary majority ... together with weak leadership and significant intra-party cleavages in both the PD and 5-Star will limit the room for manoeuvre and the shelf-life of a possible 5-Star-PD government," the London-based political risk consultancy Teneo said in a commentary.

These flaws may not be immediately on show as the coalition tackles its first task -- finding the 23 billion euros ($25.6 billion) needed to prevent an automatic hike in value-added tax scheduled for January that is designed to subdue the deficit.

PD leaders say defusing this looming tax bomb is the main reason for forging a government alliance and there is broad support amongst all parties to stave off the increase.

"The only thing they will achieve this year will be to avoid the automatic increase in sales tax," Vincenzo Galasso, professor of economics at Milan's renowned Bocconi University, said referring to the VAT increase.

Despite its inherent frailties, the mooted government has received a big thumbs up from financial markets, with Italian bond yields tumbling to record lows this week on expectations the new administration will pursue a prudent fiscal policy and avoid confrontation with Brussels over the budget.

If the yields remain around current levels, the Geneva-based Pictet Wealth Management predicts that the Italian Treasury could make savings of over 1% of national output a year thanks to the lower interest rates it will be paying on sovereign debt.

One percent of national output is around 16 billion euros.

This will give the cabinet more room to manoeuvre, and the 5-Star and PD are likely to share similar views on the need to bolster welfare spending for the poor, do more to boost the underdeveloped south and perhaps introduce a minimum wage.

They also both support sustainable development.

"The problem is going to come with policies that will bring growth to Italy, like infrastructure, cutting bureaucracy, improving education," said Bocconi's Galasso, arguing that the PD and 5-Star had different visions in these key area.

"This is where the challenge is going to be and the danger is they will simply accept the lowest common denominator."

Likewise there will be deep divisions between the two parties over another issue that has long-plagued Italian politics -- justice reform -- with 5-Star looking to empower magistrates in a way that the PD is likely to oppose.

The man who first proposed the link-up between the two parties, former PD Prime Minister Matteo Renzi, suggested only a limited programme essentially to avoid the VAT tax hike.

Party leaders took up his call, but have suggested a more ambitious agenda, hoping to extend the legislature until 2022 when parliament must chose a new head of state.

Opinion polls suggest the far-right would win any early national election, which would enable Salvini to install someone from his own political faction in the presidency -- an influential position in domestic politics.

That is a major incentive for his foes to hang together, whatever the cost, and prevent the League from taking power.

Salvini himself does not believe they can keep the course.

"The only thing uniting them is their hatred of the League," he said on Wednesday. "Can anyone say with a straight face that a PD, 5-Star government can last a long time?"