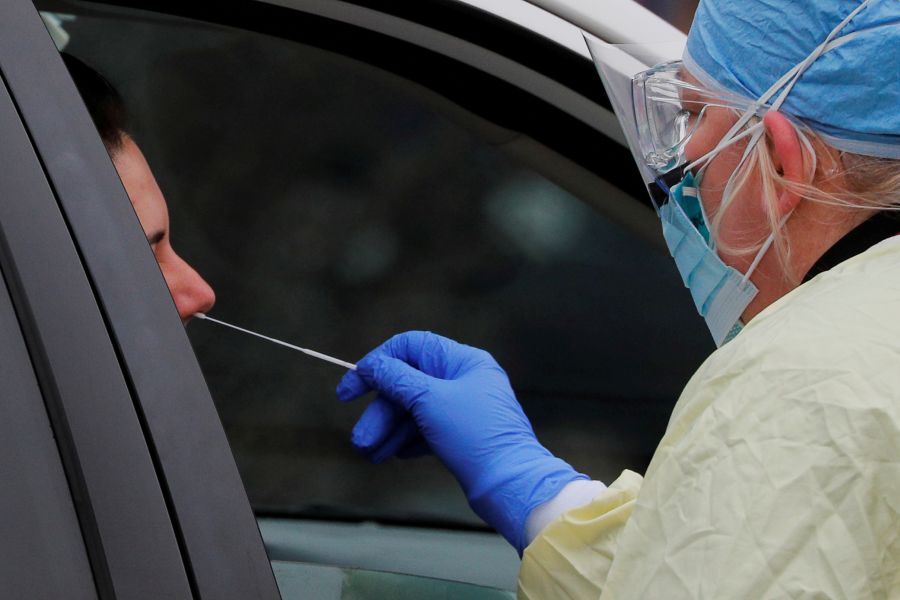 FILE PHOTO: A medical technician takes a sample to test for the coronavirus disease (COVID-19) at a drive through testing site in Medford, Massachusetts, U.S., April 4, 2020. REUTERS/Brian Snyder/File Photo

New York Governor Andrew Cuomo said on Sunday he believed there needed to be a mass rollout of rapid testing in order to achieve a "return to normalcy" after the peak of the novel coronavirus crisis passes in the United States in the coming weeks and months.

Cuomo, whose state is the epicenter of the outbreak in the United States, said New York was part of an effort to develop a program that would identify people who are both negative and not in a vulnerable category, allowing them to go back to work.

"I think you see the return to normalcy when we have an approved rapid testing program that can be brought to scale, Cuomo told a daily briefing on the coronavirus response. "That is going to be the answer, I believe."

New York, the hardest-hit state, reported on Sunday that there were nearly 600 new deaths for a total of 4,159 deaths and 122,000 total cases. Across the United States over 321,000 people have tested positive and more than 9,100 have died, according to a Reuters tally.

Cuomo's remarks come amid controversy over the dual messages from President Donald Trump, who has both warned of large deaths in the coming weeks while also talking about the need for Americans to return to work and to get the economy running.

Dr. Anthony Fauci, the director of the National Institute of Allergy and Infectious Diseases, said on Sunday that increased testing would be critical to the government's decision on when to relax business closures and other social-distancing steps.

"That becomes critical when you plan to start to get back to normal, or at least take those first steps to getting back to normal," Fauci, the nation's top infectious disease official, said on CBS' "Face the Nation" program.

While testing capacity has ramped up in recent weeks, the United States has lagged far behind other industrialized nations in coronavirus testing that public health officials believe is crucial to gaining some control over its spread.

Cuomo did not provide details about the rapid testing he said was under development.

Last week the mayor of Detroit said his city had started using test kits from Abbott Laboratories that produce results in less than 15 minutes.

When asked about Trump's comments on Saturday that he would like to see the restart of sporting events as soon as possible, Cuomo said it was best to defer to the medical experts.

New York is bracing for the apex of hospitalizations in the next week or so, and Cuomo said on Sunday it was too soon to tell if it was nearing a plateau in the crisis.

"I would love to see sports back, help with cabin fever. But this is not about hopes and dreams and aspirations and what you would like to see," Cuomo said.