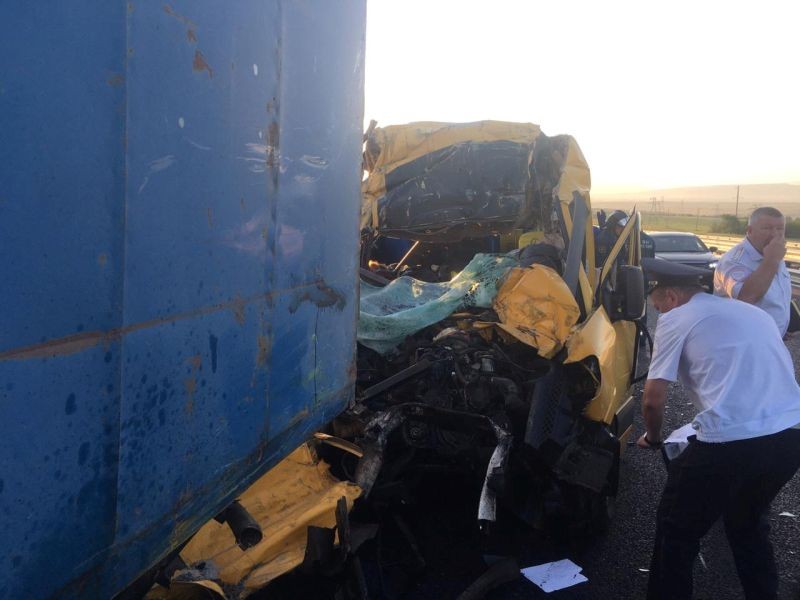 Members of Russian Emergencies Ministry and police officers inspect a minibus that crashed into a truck near the town of Belogorsk, Crimea on July 31, 2020. (REUTERS Photo)
World
31st July 2020

MOSCOW, July 31 (Reuters): At least nine people were killed after a minibus crashed in Crimea in the early hours of Friday, authorities in the Russian-annexed peninsula said.

The driver of the microbus, which was carrying tourists from the southern Russian city of Krasnodar, fell asleep at the wheel and crashed into a large truck near a village northeast of the regional capital Simferopol, Russian news agencies reported.

Seven people died on the spot, while another two died as they were being treated for their injuries.

Another nine people were injured.

The local branch of the Interior Ministry said it was launching a criminal case into a suspected violation of traffic regulations.

Russia has a patchy road safety record. Nearly 17,000 people were killed as a result of road accidents last year, according to the traffic police.

Crimea, which Russia annexed from Ukraine in 2014, was a favoured destination for Soviet workers' state-funded holidays and now attracts a steady influx of Russian tourists.