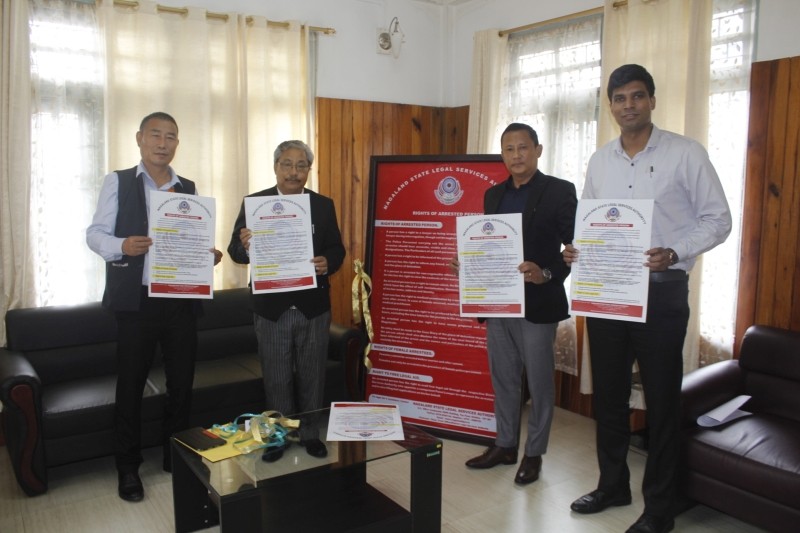 Officials during the launching of hoardings and pamphlets enumerating the ‘Rights of Arrested persons’ to be distributed in all the police stations across the state at the Judges Bungalow in Kohima. (Photo Courtesy: NSLSA)
Nagaland
25th September 2020

Kohima, September 25 (MExN): As part of the 2nd phase for implementation of ‘Protocol for Early Access to Justice at Pre- Arrest, Arrest and Remand Stage’, the Nagaland State Legal Services Authority (NSLSA) today launched hoardings and pamphlets enumerating the ‘Rights of Arrested persons’ to be distributed in all the police stations across the state at the Judges Bungalow in Kohima.

During the 1st phase of the implementation of the protocol District Legal Services Authorities (DLSAs) were directed by the Nagaland State Legal Services Authority to conduct consultative meeting with prosecutors and police at the district level of Superintendent of Police, Sub Divisional Police Officer, Officer-in-Charge (Police Station), and Investigation Officer.

The hoardings and pamphlets will be put up across 87 police stations in the state which enumerates the rights of arrested persons, rights of female arrestees and rights to free legal aid including contact details for legal aid and assistance.

Launching the protocol, Justice Hukato Swu, Judge Gauhati High Court, Kohima Bench opined that a lot of arrested persons are unaware of their rights and due to such ignorance; many of the rights are violated.

“Many of the accused persons are not given opportunity to have access to lawyers,” the judge further added.

Noting the importance of awareness through innovative ways, Swu viewed that distributing pamphlets to accused persons within the vicinity of police station at early stage of arrest was an imperative step. For instance, a female accused has the right to not be arrested before sunrise and after sunset; or to be arrested only in the presence of female police personnel. However, these are often ignored and violated, he shared.

He also said that many citizens are not aware of the availability of free legal aid and in respect to rights of tribal persons, legal aid is provided for free in police stations. Further, the judge said the hoardings and pamphlets will also enable the police to exercise their power legitimately and “not devising force unless necessitated.”

NSLSA Project Coordinator Cherry Ovung, in her welcome address said that access to justice is important during the early stages of criminal process because it ensures, amongst other things, "protection of rights of people when they are most vulnerable and thus it also strengthens the criminal justice system."

With the launching of the protocol, she said it would ensure that legal aid is provided not only in the trial stage but from the beginning even before the arrest is made.