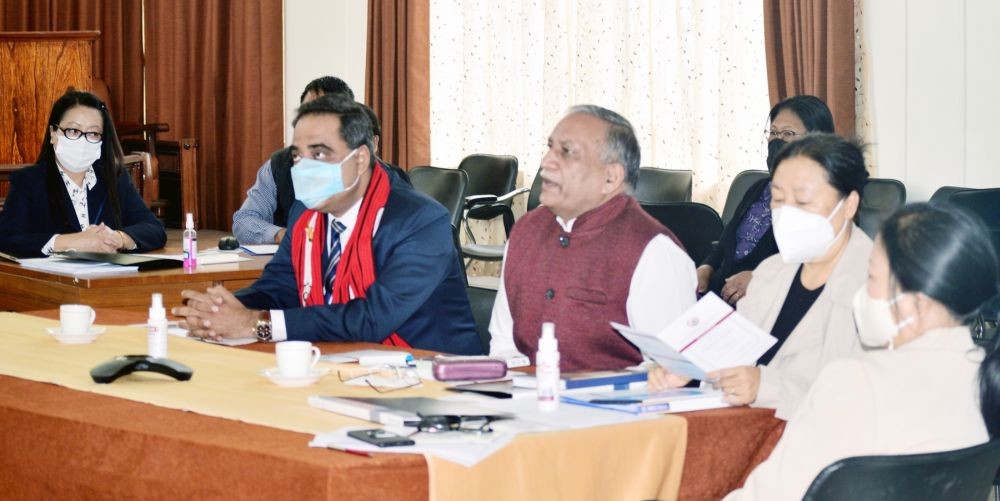 Prof Pardeshi Lal and others at the inaugural session of one day orientation programme on ‘Choice Based Credit System’ in Kohima on April 16. (Morung Photo)
Nagaland
16th April 2021

Owing to the prevalent situation amid fears of a second wave of COVID-19, the programme which was to be held at De Oriental Grand was changed to a virtual meet.

During the inaugural session, Prof Pardeshi Lal, Vice Chancellor of Nagaland University (NU), Lumami highlighted the importance of the ‘Choice Based Credit System’. He appreciated the concern of the Department of Higher Education and the academic leaders for their efforts to pursue quality education. He stated that the root of the quality of leadership that the nation is building upon comes from the educational institutions.

The inaugural session was chaired by Anoop Khinchi, Secretary, Higher and Technical Education, Nagaland while vote of thanks was proposed by Dr Apeni Lotha, Director, Higher Education.

It may be mentioned that the University Grants Commission (UGC) introduced the Choice Based Credit System popularly known as CBCS and has made it mandatory for Higher Education Institutions (HEIs) to implement it.

Currently, three Autonomous institutions in Nagaland have already introduced the CBCS and Nagaland University will also be introducing it from the next academic session.

The conventional system of higher education was predefined and redundant and lacked contemporary appropriateness. CBCS is a student-centric approach which will provide a convenient and effective teaching-learning platform.

Thus CBCS was initiated by UGC to bring in flexibility for the knowledge seeker from a list of elective, core and soft skill courses.

To maximize skill based education and enhance student learning outcomes in terms of their grades as well as skills, the National Education Policy (NEP 2020) has made crucial changes in the traditional teaching-learning system in India.

Thereby, the government has decided to introduce a unique concept of Academic Bank of Credit (ABC) coupled with CBCS to facilitate the best education journey to the career-oriented students of the 21st century.