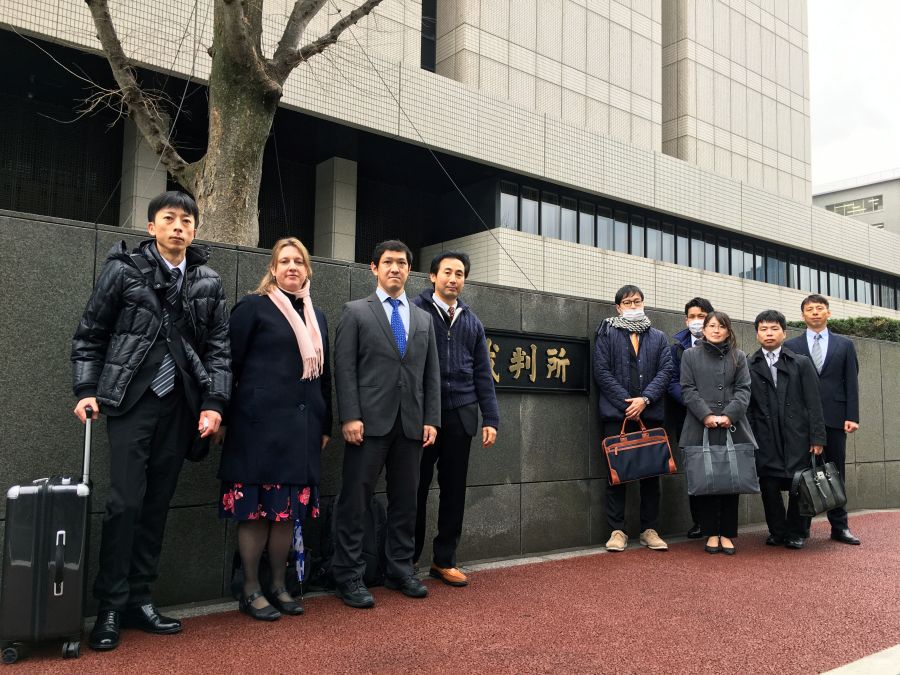 Parents estranged from their children - plaintiffs in a class-action lawsuit against the Japanese government - pose in front of the Tokyo District Court, Japan on February 26. (REUTERS Photo)

TOKYO, February 26 (Reuters): A group of parents fighting against child "abductions" by their partners accused Japan in a lawsuit on Wednesday of having a double standard in how it treats domestic instances of such incidents, compared to international ones.

Fourteen plaintiffs in the Tokyo District Court lawsuit say it is unconstitutional that Japan does not have a system to prevent violation of their parental rights, particularly since it has signed an international treaty on such abductions.

The class action will turn up the heat on Japan's justice system as more left-behind parents decry the effective condoning by courts and law enforcement of a practice other developed countries treat as a crime.

"It's time for Japan to solve this issue," said Catherine Henderson, an Australian schoolteacher in Tokyo who says her husband left with their two children last April without warning, despite divorce court proceedings.

"I had no idea that in Japan, the rights of children to see both parents are not upheld by the family court," the only non-Japanese plaintiff told a news conference.

There was no immediate government reaction on the filing of the lawsuit, and no date has yet been set for a hearing.

No official figures keep track of the number of families affected, but non-profit Kizuna Child-Parent Reunion estimates that 150,000 children lose contact with a parent every year because of estrangement from the non-custodial parent.

"Japan made an agreement internationally but hasn't aligned its domestic laws to make it wrong," said lead counsel Tomoshi Sakka. "I'm curious to see how the government will explain this discrepancy."

Japan became the last G7 country to join the 1980 Hague Abduction Convention just six years ago, following intense pressure from the United States and other nations.

The treaty lets parents petition to have children returned to their country of "habitual residence" if that country considers the removal "wrongful".

Asked about the discrepancy, a foreign ministry official told Reuters the ministry was not aware of how domestic cases were treated, but that it held mediation based on the notion that parental child abduction was "wrongful".

Since Japan joined the treaty, the foreign ministry has mediated return orders in about 100 cases, with the largest number from the United States.

Italy and Germany warn against the practices in Japan in travel advisories they have posted.