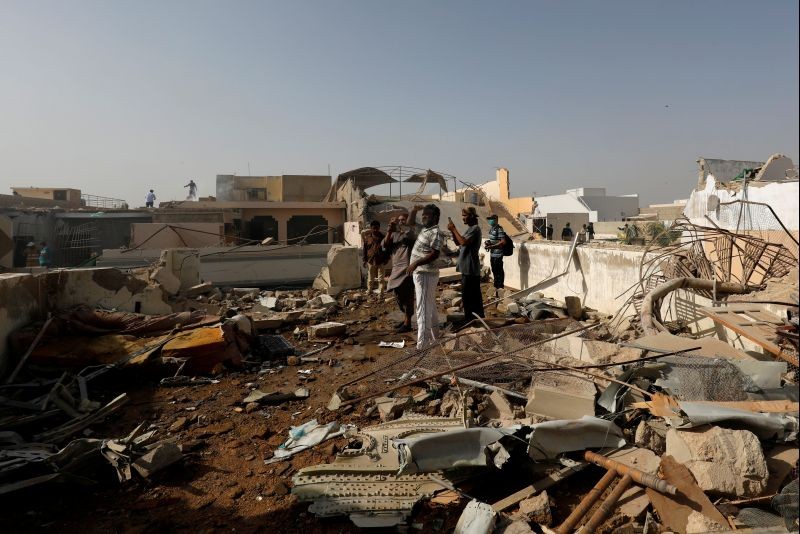 People stand on a roof of a house amidst debris of a passenger plane, crashed in a residential area near an airport in Karachi, Pakistan on May 22, 2020.( REUTERS File Photo)
World
24th June 2020

ISLAMABAD, June 24 (Reuters): The pilots of a Pakistan airliner that crashed last month, killing 97, were distracted and preoccupied as they talked about the coronavirus pandemic while preparing for an initial failed attempt to land, the country's aviation minister said on Wednesday.

The Airbus A320 of national carrier Pakistan International Airlines crashed on May 22 in the southern city of Karachi, killing all but two of those aboard as it came down a kilometre (0.6 mile) short of the runway on its second try.

The engines of the aircraft had touched the ground as it landed without its wheels down on the first attempt, before taking off again, minister Ghulam Sarwar Khan told parliament as he presented an initial report on the disaster.

The flight data showed the landing gear was lowered at 10 nautical miles, Khan said, but then raised again 5 nautical miles from the runway, which he described as "beyond comprehension".

The aircraft was "100 percent fit to fly" and there was no technical fault, he said, but added that the pilots were not "focused" because of the pandemic.

"The discussion throughout was about corona," Khan said, referring to exchanges between the pilot and co-pilot he said he had listened to on the cockpit voice recorder. "Corona was dominant over their mind. Their family was affected."

The report, reviewed by Reuters, did not spell out the pilots' conversation on the virus, but said they did not follow set protocols.

"Several warnings and alerts such as over-speed, landing gear not down and ground proximity alerts, were disregarded," it added. "The landing was undertaken with landing gear retracted. The aircraft touched the runway surface on its engines."

The report said the aircraft was cleared by controllers to land without observing that the landing gears were not extended, nor was it conveyed to the pilots that the engines had scraped the runway.

The report added that there was no demonstration of any malfunction in the landing gear system on Flight PK8303, which had taken off from the eastern city of Lahore.

Shortly after the engines scraped the runway and a go-around was attempted, both engines failed one-by-one, the report said.

"When the plane took off again, both engines had been damaged; and when the plane was making an approach for a second landing it didn't have that power and fell on the residential area," Khan told a news conference later on Wednesday.

Khan said the captain and co-pilot, both of whom were killed, were experienced and medically fit.

Air traffic control drew the pilot's attention to the irregularity and urged a go-around, Khan said.

"They were warned by the controllers, but said, 'I'll manage'… and then they started discussing corona again."

The secretary of the Pakistan Airline Pilots' Association, Imran Narejo, told Reuters that pilots were expected to not be distracted during crucial procedures such as landing, but other factors should also be investigated for the complete report.

"It was pointed out the pilots were busy talking about corona, and that they may have overlooked a few things," he said. But other reasons were also there, like them not being provided proper support from air traffic control".