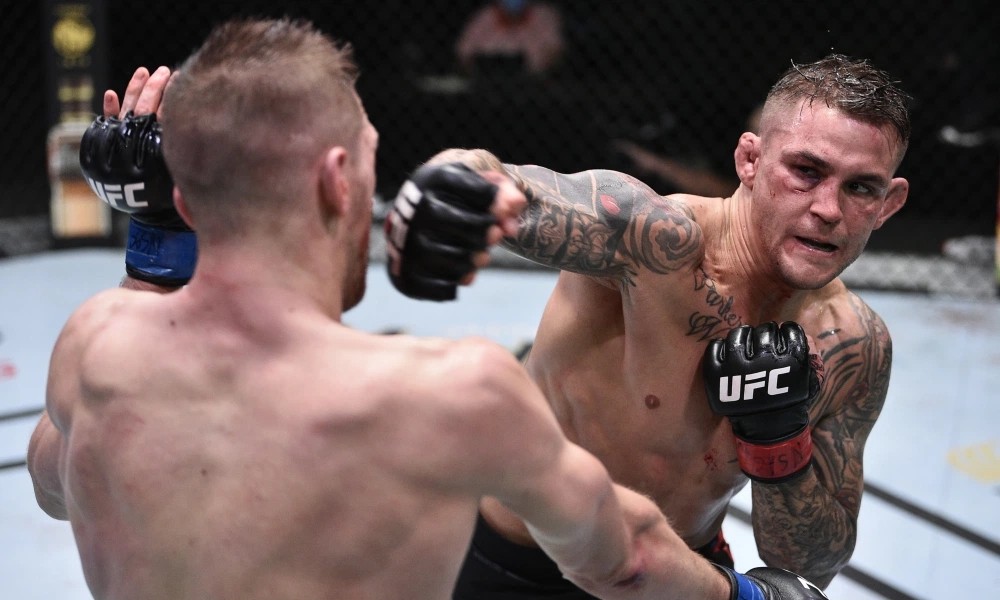 Dustin Poirier absorbed several heavy blows but delivered a few more Saturday night, ultimately outlasting Dan Hooker for a unanimous decision victory in a “fight of the year” candidate in the main event at UFC Fight Night in Las Vegas.

Poirier (26-6) and Hooker (20-9) boxed at an incredible pace throughout the first two rounds, both remaining standing despite being rocked multiple times. Hooker nearly ended it late in Round 2, after both fighters had already been bloodied, but Poirier slowly took control down the stretch. He showed his conditioning in an impressive final round to claim scores of 48-47 from two judges and 48-46 from the third.

It was Poirier’s first bout since he lost via rear-naked choke to Khabib Nurmagomedov in a lightweight championship bout in September of 2019, the longest time between fights in his career. In October, he had hip surgery that kept him from bearing weight on his leg for eight weeks.

But the 31-year-old proved he had the stamina to go the distance, saying afterward that he “had a few more rounds left in me.”

“It was a tough one man,” Poirier said. “Dan came to fight. He’s a tough guy on the rise.”

Hooker, a 6-foot, 30-year-old from New Zealand, caught the 5-foot-9 Poirier with a knee to the head late in the second round and followed with a series of punches to the head of his shaken opponent.

Poirier, who somehow remained standing, said afterward that the knee caused him to “flash out for a second,” and that he “came to” while being hit and didn’t know how much time was left in the round. The horn sounded just seconds later, perhaps saving him from a technical knockout.

In Rounds 3 and 4, Hooker managed takedowns and did some damage, but Poirier fought back with near-misses on a few submission attempts, including guillotine chokes and an arm bar. He also landed sharp elbows in Round 3 and punches from behind while controlling Hooker’s back in Round 4.

By Round 5, Hooker clearly had less gas in his tank and was unable to convert his takedown attempts. Poirier ultimately landed 222 of 291 strikes, including 196 of 262 to the head.

In the co-main event, Mike Perry (14-6) handled Mickey Gall (6-3) by unanimous decision in a welterweight bout to snap a two-fight losing streak.

Perry, who fought with only his girlfriend in his corner, was cut above the eye just two minutes in. But he then took control both as a boxer and on the ground, nearly ending it with heavy elbows from a full mount just before the second-round horn sounded.

Earlier Saturday, Maurice Greene (9-5) submitted fellow heavyweight Gian Villante (17-12) with a rare arm triangle in the third round. Villante had dropped Greene with a heavy punch moments earlier, but Greene quickly turned the tables to win while on his back.