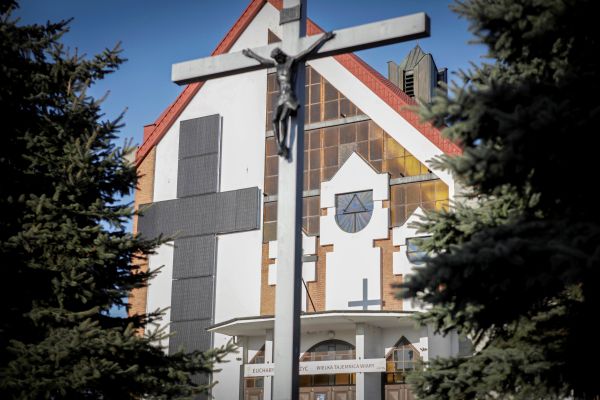 A 12-meter-tall crucifix made from solar panels is seen at a church in Pleszew, Poland on December 20, 2019. (REUTERS File Photo)

PLESZEW, Poland, April 20 (Reuters): By night, the 40-foot-tall cross on the Catholic church in central Poland offers a neon light show of blue, red or purple. By day, the cross produces the electricity to power the church's lighting, heating and air conditioning.

The cross, made of 18 solar photovoltaic panels, is the brainchild of Krzysztof Guzialek, the ecologically minded priest at Our Lady of Czestochowa church. He said he arrived at the parish in the summer of 2018 and wondered how he was going to cope with such huge electricity bills.

He decided he would install solar panels, and had a flash of inspiration: They would be placed in the shape of a cross.

He said he was moved by an encyclical by Pope Francis five years ago in which the Catholic leader called on his followers to work together to save the planet, saying Mother Earth "cries out to us because of the harm we have inflicted on her by our irresponsible use and abuse of the goods with which God has endowed her."

The issue of climate change has put coal-reliant and staunchly Catholic Poland at odds with the European Union and the Vatican. In an interview with a Polish TV network late last year, the archbishop of Krakow said that "ecologism is a very dangerous phenomenon."

Guzialek believes people must care for the planet.

"We don't have indefinite amounts of coal," he said. "We don't have enough raw materials in the ground to last for many generations.... We must use what God has given us: the wind, the sun."

The priest has even inspired others to follow suit. Matylda Sczepaniak, a 37-year-old doctor from a neighboring town who runs the church choir, decided to install panels on the roof of her private clinic soon after the church's cross went up.

"This idea, the photovoltaic crucifix, is a fabulous combination of economy, ecology and faith," she said. "And it looks fantastic, especially at night when it is lit."

Guzialek, the priest, says he hopes it make people more aware of what they can do for the environment.

"We all need to think that we do it not only for ourselves but for the future generations. Let's save the Earth, let's save the world."