Pope to politicians: To fight coronavirus, put country before party 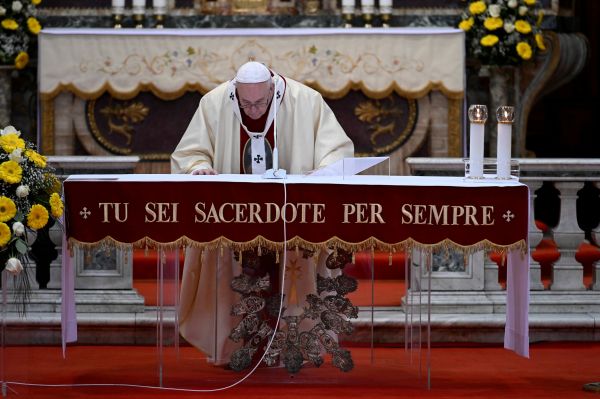 Pope Francis leads Mass and the Regina Coeli prayer in Rome's Santo Spirito in Sassia church without public participation due to an outbreak of the coronavirus disease (COVID-19), in Rome, Italy on April 19, 2020. (REUTERS Photo)

VATICAN CITY, April 20 (Reuters): Pope Francis urged politicians on Monday to put aside partisan differences in order to deal with the coronavirus crisis in a united way.

Francis' private morning Mass has been transmitted live on television for the past six week since the outbreak took hold in Italy. Each day he chooses a theme or intention, such as thanking those who provide medical and other essential services.

"We pray today for men and women who have a political vocation," he said at the start of the Mass, adding that "politics is a high form of charity".

The Mass is attended by only a few close aides instead of several dozen guests, as was the case before the outbreak.

"(We pray) for the political parties of various countries, so that in this time of pandemic, they together seek the good of the country and not the good of their own party," he said.

The leader of the world's 1.3 billion Roman Catholics did not name any countries or politicians.

Francis, who has been saying Masses and holding general audiences without public participation, has been drawing attention to the effects of the crisis on society's most vulnerable sectors, particularly the homeless and migrants.

On Sunday he called for an all-embracing vision of the world after the Covid-19 crisis, saying moving on without global solidarity or excluding some from the recovery would result in "an even worse virus".