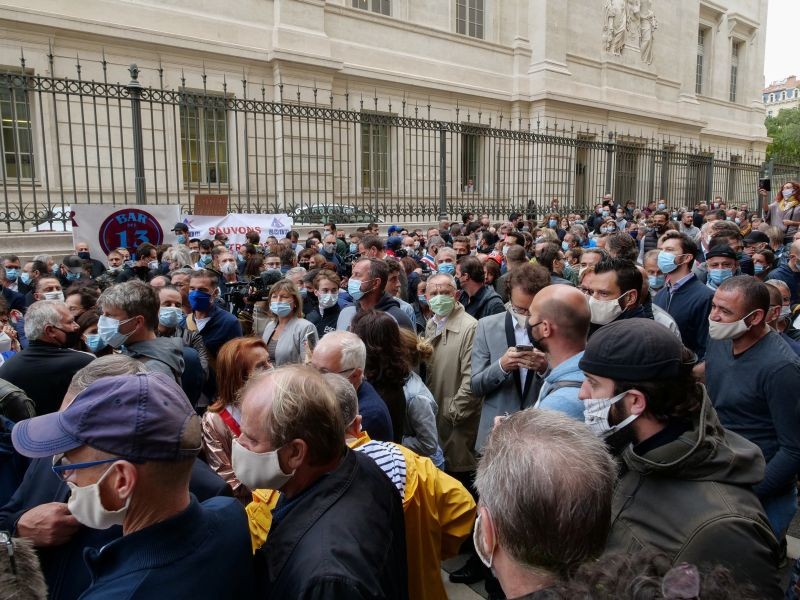 Hundreds of restaurant and bar owners protest after French authorities announced that they order cafes and restaurants to shut down for two weeks to curb the spread of the coronavirus disease (COVID-19), in Marseille, France on September 25, 2020. (REUTERS Photo)

MARSEILLE, France, September 25 (Reuters): Protesters in Marseille on Friday demanded President Emmanuel Macron's government reverse an order to shut down bars and restaurants in France's second-biggest city, the epicentre of a second wave of coronavirus infections.

Local politicians said the move was disproportionate to the risk and would devastate the local economy.

Some proprietors said they would defy the order, amid signs of mounting public frustration across France at the reimposition of restrictions on public life as daily COVID infections hit record highs.

"We should stay open, they won't be able to close everyone," Jean-Pierre Cotens, owner of the 13 Coins bar, said during the protest. "And if there's a fine, well, we'll take it, but we'll be better off working than shutting."

The government order came this week after it placed Marseille and its surrounds on the Mediterranean on the maximum alert level for the spread of the virus.

The pandemic has killed more than 31,500 people and infected nearly half a million, the second-highest in Western Europe behind Spain.

Health Minister Olivier Veran visited an intensive care ward in the city, where doctors told him the next three weeks would be critical. Public hospital ICU units in the city are near full, doctors have said.

"These measures aren't about pointing the finger at Marseille," Veran told reporters at the hospital. "We have to put a brake on the spread of the virus. The earlier we act, the shorter the time we'll need to act for."

Local officials say earlier restrictions, including early closing hours for bars and a ban on student parties, were working and that the latest round of curbs was premature.

"We're in complete despair. When they shut us down, they humiliate us," said restaurateur Bernard Marty.

"This doesn't just penalise the restaurateur behind the till. It's an entire sector plunged into crisis: suppliers, event organisers, discotheques. Do they expect us to die in silence?"

As France and other European countries try to smother the second wave of infections, Prime Minister Jean Castex said late on Thursday that he could not rule out targeted lockdowns. France, he said, faced a race against time.

In Paris, a notch below Marseille on "reinforced alert", bars and restaurants will have to shut from 10 p.m. and sports halls and gyms will be closed to the public.

The tightened restrictions have split public opinion with a groundswell of frustration bubbling up.

"Let's live life to the full, hug each other, kick the bucket, get fevers, cough, recover, life is too short an interlude to enjoy it reluctantly," he wrote on Twitter.

Labour Minister Elisabeth Borne said the government would act to cover the fixed costs of bars and restaurants during the shutdown. Partial unemployment schemes would guarantee employees receive their full salary, she added.