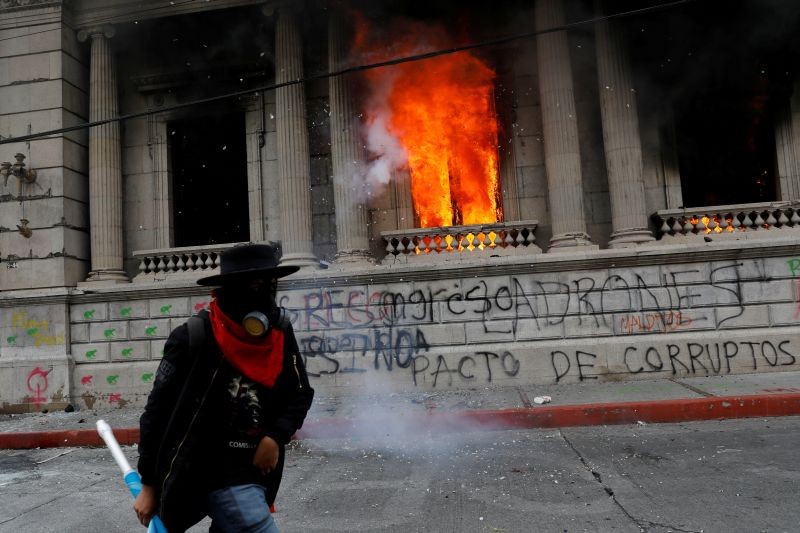 A man walks past an office of the Congress building set on fire by demonstrators during a protest demanding the resignation of President Alejandro Giammattei, in Guatemala City, Guatemala November 21, 2020. REUTERS/Luis Echeverria
World
22nd November 2020

Guatemala City, November 22 (IANS): Protesters who were rallying against the approval of the 2021 budget in Guatemala set fire to a part of the Congress building here.

On Saturday night, some protesters approached the headquarters of the Legislative Palace, where they hurled objects with fire into the offices of the Congress building, reports Xinhua news agency.

Guatemala's volunteer and municipal firefighters had to intervene to control the flames.

Images released by firefighters show that the furniture in some congressional offices was almost completely consumed by the fire.

"I reiterate that we have the right to demonstrate according to the law. But we cannot allow it to vandalize public or private property.

"Whoever is proven to have participated in these criminal acts will be punished with the full force of the law," the President said.

The approval of the 2021 budget, which cuts spendings on education and healthcare, has caused high political tension in Guatemala as many sectors also oppose the increase of public debt proposed by the government.

Vice President Guillermo Castillo has called on Giammattei to resign with him.