A dilapidated tin house with no doors or proper flooring, wooden planks roughly hammered together to resemble desks and benches. This is what meets the eye when one visits the lower section (Classes 1 to 5) of the Government Middle School (GMS) in Pungro town.

The GMS Pungro town also does not have basic facilities like drinking water and electricity. Even the toilets in the schools are in a state of disrepair and filled with filth. During a visit to the school, it was also observed that a wooden post was being used to prop up a rotten wooden beam outside one of the classrooms.

Around 406 students have been enrolled in the six-decade-old school. Most of the students come from low-income families from at least 40 villages under Pungro—one of the biggest subdivisions under the Kiphire Aspirational District. 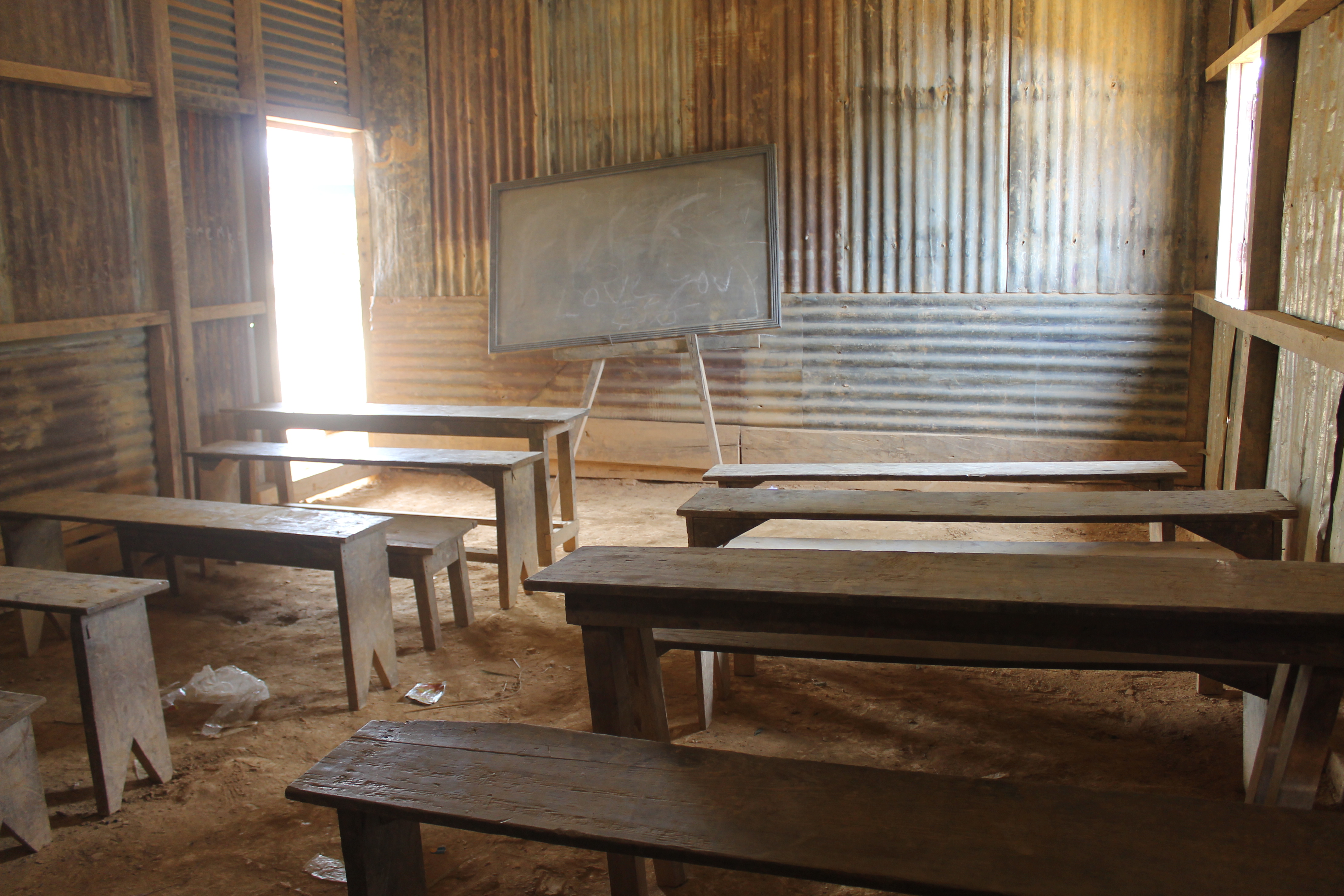 A view of one of the classrooms in GMS Pungro. (Morung Photo)

Locals said a few years ago, the old school building was dismantled, and another building was constructed for the higher classes (Class 6 to 8). The school authorities salvaged enough building materials from the old building to build classrooms for the lower section as it did not have funds for a proper concrete structure.

Corroborating this, a teacher at the GMS told The Morung Express that the school receives an annual grant of Rs 75,000 to cover all miscellaneous expenditures, including procurement of chalks, dusters, and utility bills.

“At the end of every year, we use what is left of the fund to lay floors in the primary section classrooms and procure benches and desks,” said the teacher who requested anonymity. So far, the classrooms for LKG to Class 1 are yet to have proper floors.

But the decaying infrastructure is the least of the problems at the GMS. The school also faces a shortage of subject teachers, especially at the middle school level. At present, it has only one Hindi teacher for eight classes (Class 1 to 8).

While the primary teachers help out in teaching general subjects, we need proper subject teachers to provide quality education to the students, the teacher added.

At the GPS Forest Ward, 42 students enrolled in classes A to 3 in the current academic year. However, the school has only two classrooms which are partitioned to accommodate students from all five classes.

In addition to this, the school also does not have a staff room for its seven teachers. Instead, teachers are seen standing outside during the breaks, or they make use of the Mid-Day-Meal kitchen, locals said.

As for the GHSS, which was first established as a Government Primary School, the school was upgraded two times before it was finally upgraded to the higher secondary level in 2014. But despite the upgrades, the school building had not seen infrastructural upgrades since 1973, when it was first constructed.

The GHSS Pungro is one of the two government-run higher secondary schools in the district—the other is located in the district headquarter Kiphire. The school sees an annual enrolment of approximately 300-350 students, most of who are from villages under the subdivision. 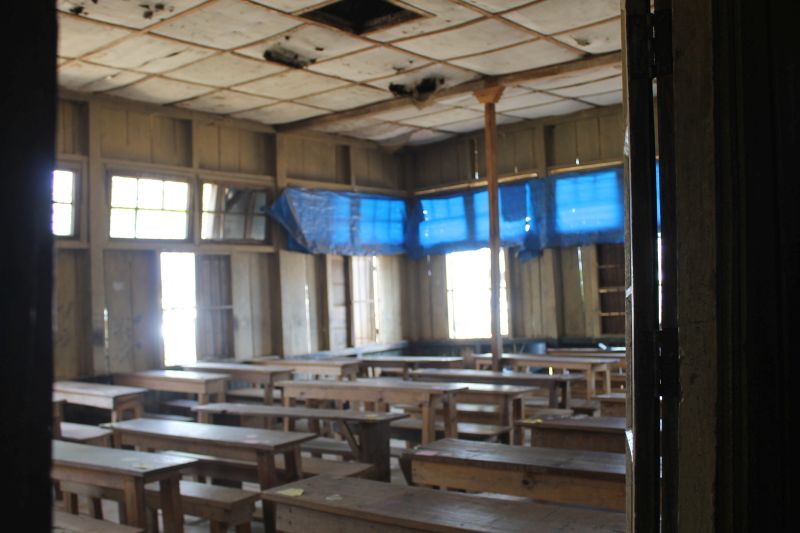 Most of the ceilings in the classrooms at GHSS Pungro were in tatters. Several window panes were missing and were replaced with tarpaulin sheets. (Morung Photo)

During a visit to the school, it was observed that there are only five classrooms—one each for every class (Class 8 to 12), making it impossible to divide the classes into smaller and manageable sections.

The lack of classrooms has also affected the school’s enrolment capacity as there is no space to take in more students.

The school did not have an auditorium, and a larger classroom which was partitioned with plywood dividers, served the purpose whenever required. It also did not have indoor or outdoor sports facilities. Other basic facilities like toilets were also in a state of disrepair, and the school also did not have adequate water and electricity supply or backup.

Parts of the concrete foundation posts on which the school building stands also had visible cracks and the rotting wooden beams were supported by piles of rocks. 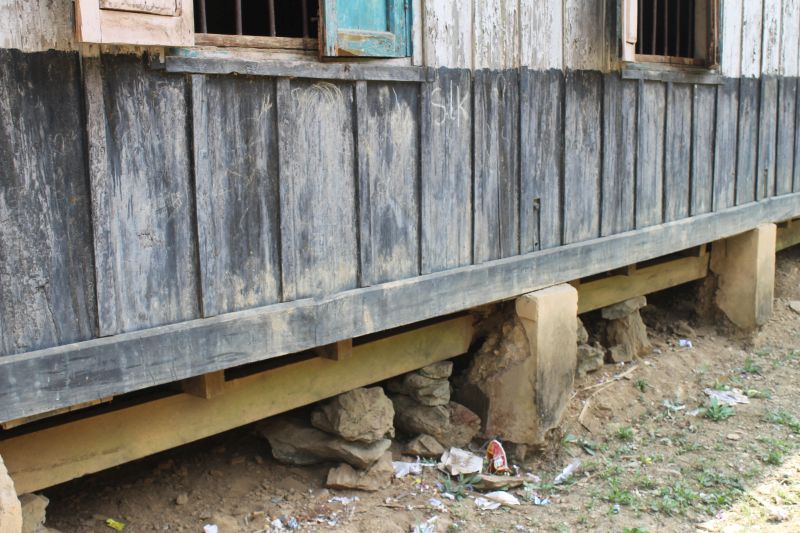 Parts of the concrete foundation posts on the GHSS building had visible cracks and the rotting wooden beams were supported by piles of rocks. (Morung Photo)

In addition to this, it was informed that the school board of education had introduced Multi-skill Foundation Course (MSFC) as a subject, which would require the setting up of separate laboratories for different course modules. In this regard, school authorities informed that one of the larger classrooms had been partitioned to make space for lab equipment. However, more labs need to be set up.

With a lack of proper infrastructure, the school also faces the risk of losing the Atal Tinkering Laboratory (ATL), which was recently sanctioned.

Much like the GMS, the higher secondary school’s problems do not stop at the infrastructural level. 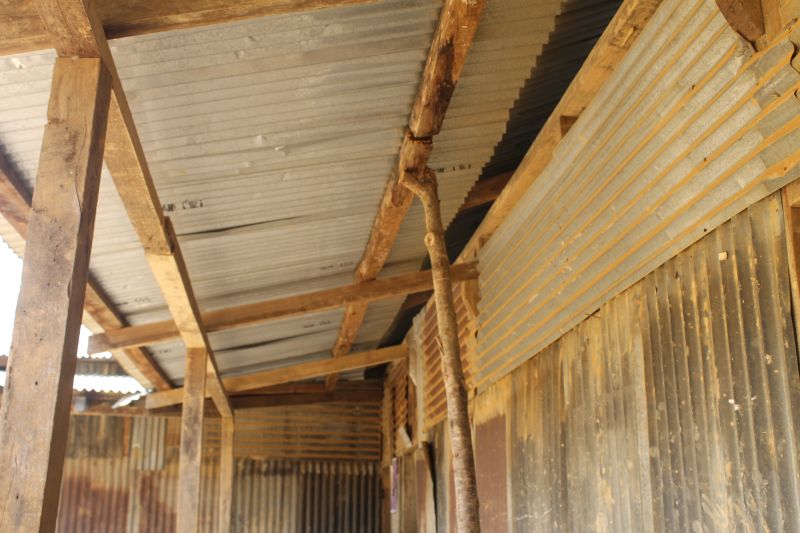 A wooden post being used to prop up a rotten wooden beam outside one of the classrooms in GMS Pungro. (Morung Photo)

In the last academic year, the school did not have a teacher for Education subject, prompting school authorities to take the help of teachers from institutions elsewhere. Executive Chairperson of Pungro Town Students’ Union (PTSU) Throngso Yimchunger, who was present during the visit, pointed out that this was because teachers are often transferred without relievers. The Education subject teacher was reportedly transferred out in early 2020, and the reliever is yet to join the school.

The GHSS needs more subject teachers as currently, it has only one teacher for each subject, he added.

With regard to infrastructural upgrades, the PTSU members stated that school authorities had intimated the department about its requirements. However, it had not received any positive response yet.

There were suggestions that the GHSS should be shifted to an unused Model Higher Secondary School building which is located about 2 or 3 kilometers away from the present location. However, the PTSU expressed concern that the move would deter students from enrolling in the school.

“Most of the students walk to school every day from nearby villages. Shifting the school further away from them would prove disastrous,” Yimchunger reasoned.

Additionally, the GHSS currently offers courses only in the Arts Stream. Introduction of other streams such as Science and Commerce remain a distant dream as the school can barely meet the requirements of a single-stream institution.

Infrastructural and logistical deficits in government schools are not unique to Pungro town. Most government-run schools in the state have similar problems. With more awareness on quality education being vital for enhancing the quality of life and improving overall holistic human development for the people, early interventions, especially in the rural setting, would benefit the students and the State as a whole. 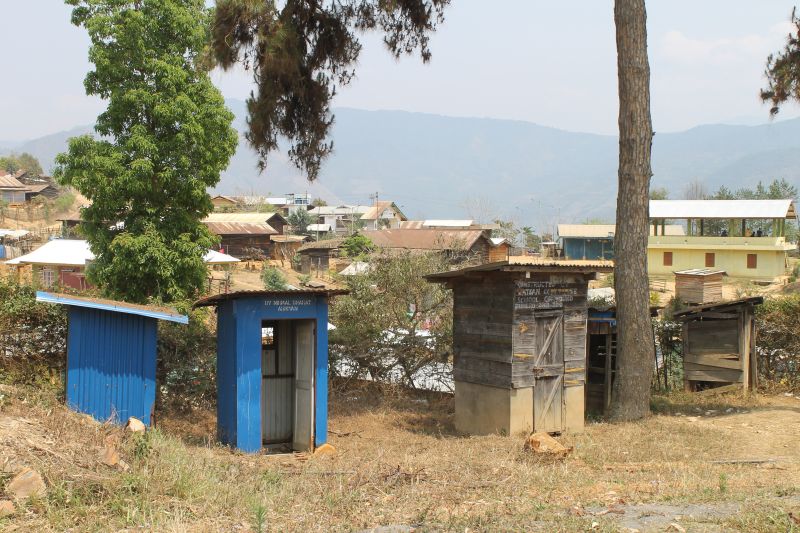 Even the toilets in the schools are in a state of disrepair. (Morung Photo)