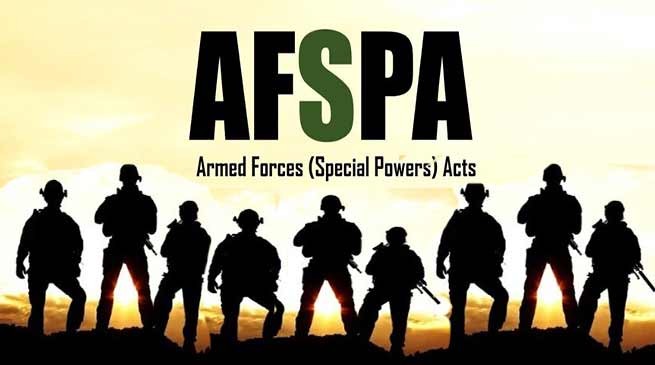 Dimapur, July 14 (MExN): The NPP Nagaland State on Tuesday termed the extension of the Disturbed Area Act in the whole of Nagaland for another 6 months by the Union Ministry of Home Affairs as “worrisome,” and appealed for a review of the same. It further urged the central and state government to repeal the Armed Forces Special Powers Act (AFSPA) in Nagaland.

All the National Political Workers, Civil Society Organisations, Political Parties, etc. are eager and enthusiastic to solve the Indo- Naga Political problem which has been recognized not only by the Indian Government but also by International forums, NPP observed.

In such a situation, declaring the entire State of Nagaland as a disturbed area and suggesting that Nagaland is in a disturbed and dangerous condition will only send wrong signals to the people, it added.

“…What is more worrisome is that the people are silent on the extension of the AFSPA in Nagaland but are raising a hue and cry over the issue of sale and consumption of dog meat in Nagaland,” NPP Nagaland stated.

Sharing its findings and observations on the AFSPA, NPP Nagaland State said that the lack of precision in the definition of a disturbed area under the AFSPA demonstrates that the government is not interested in putting safeguards on its application of the AFSPA and is not serious about the Naga peace talks.

Highlighting that arrests can be made without any warrant under the AFSPA, the NPP observed that this manifests “the arbitrariness of the law.” It also made note of Section-5 of the Act which states that, after the military has arrested someone under the AFSPA, they must hand over that person to the nearest police station with the “least possible delay”. The unspecified time period has resulted in ‘arbitrary detention’, it said.

It further stated that the impunity to military officers under the AFSPA is the reason why “several cases of human rights abuses have went unheard.”

“Emergency rule can only be declared for a specified period of time whereas the AFSPA is in place for an indefinite period of time and there is no legislative review,” the NPP noted, terming the act ‘more draconian’ than emergency rule.

AFSPA has been challenged on several occasions by many human rights activists as it contravenes both Indian and International law standards, NPP maintained.

It referred to the recommendation of the five-member Committee under the Chairmanship of Justice B P Jeevan Reddy, former judge of the Supreme Court in 2005 that the Act should be repealed. Even the Second Administrative Reforms Commission headed by Veerappa Moily in its Fifth Report in June, 2007 had also recommended the repeal of the AFSPA, the NPP stated.

As such, the NPP opined that the State Government should understand the ground realities and properly apprise the Central Government that the peace and tranquility is rapidly revisiting the state.

It urged the Central Government to retrospect on its decision to extend the AFSPA in the state and take up necessary review at the parliamentary level to repeal the Act as soon as possible.

The NPP further requested the State Government to take up the matter of repealing the AFSPA at the Prime Ministerial level and conclude the Naga peace talks at the earliest.