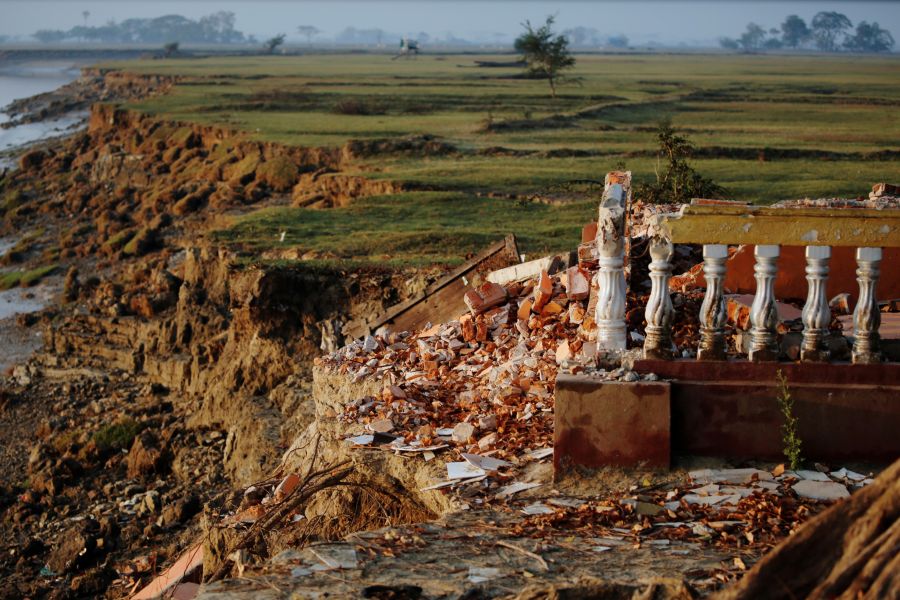 The ruins of a monastery are seen after a riverbank collapsed into the water in Ta Dar U village, Bago, Myanmar on February 6, 2020. (REUTERS File Photo)

BAGO, Myanmar, February 27 (Reuters): Three years ago, the villagers watched as the Sittaung River on Myanmar's southeast coast crept closer to them, swollen by powerful tidal surges from the Gulf of Mottama that eroded its banks.

Eventually, the 1,500 residents of Ta Dar U had to accept the inevitable: move or be washed away.

Dismantling their wooden homes, they relocated several kilometres inland, away from the fertile fields they had cultivated for decades.

"Where we now see water, our farming land used to be," said farmer Tint Khaing. "It was very big, nearly three hours' walking distance. We all lost our farmland to the sea."

Ta Dar U is among hundreds of villages at the frontline of Myanmar's climate crisis, where extreme weather patterns and rising sea levels have amplified and accelerated natural erosion.

Environmentalists consider Myanmar to be particularly vulnerable. It was among the top three countries affected by extreme weather between 1998 and 2018 on the Global Climate Risk Index, published by environmental think tank Germanwatch.

"Flooding will be worst during the rainy season and high tide, dragging salty water up into the land," he said.

After their homes fell into the sea, the people of Ta Dar U, mostly rice farmers, scattered across the delta.

Saltwater contaminated their lands and they were forced to take up new occupations, with little success.

Nearly 200 students now travel hours every day to attend school after their own, which once stood near the town centre, was reduced to a crumbling pile of rubble on the riverbank.

"If the erosion continues at this rate, the future of the students will fade as well," said Myo Min Thein, the sole teacher at a makeshift school, who said he is struggling to teach the 26 students, ages 4 to 14, by himself.

An official from the disaster management department said it did not have specific programmes for those displaced by riverbank erosion. Regional government officials did not respond to Reuters' requests for comment.

"It will be costly but it must be done," he said. "The environment has changed, so the people must learn to adapt."