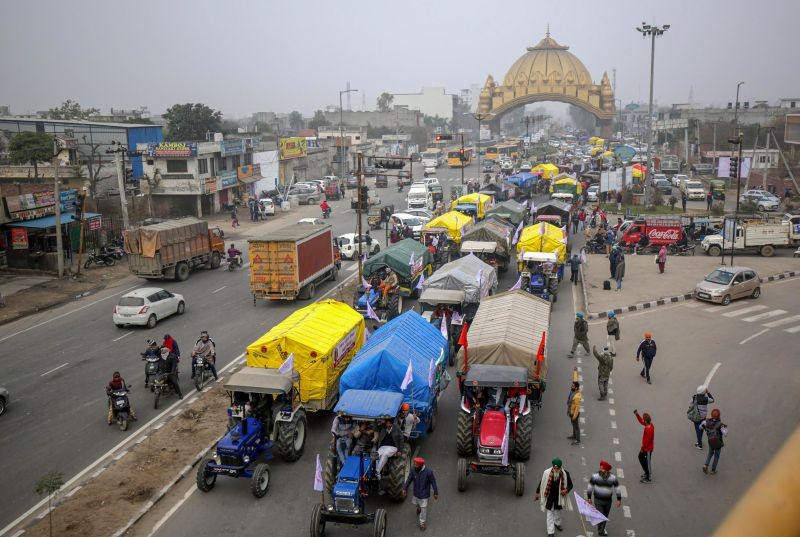 Farmers on their tractor march towards Delhi, to join the main agitation against the Center's farm laws, in Amritsar on January 12. Farmer organizations have planned to carry out a tractor march on Republic Day. (PTI Photo)
India
12th January 2021

New Delhi, January 12 (PTI): Farmer leaders on Tuesday said they welcome the Supreme Court order staying the implementation of the three farm laws till further orders, but they will continue to protest till the contentious legislations are repealed and expressed doubts over the neutrality of the panel formed by the top court to end the impasse, a view shared by the Congress.

The agitating farmers also made it clear that they will not participate in the SC-ordered committee process.

Reacting to the SC ruling, the government said the order to stay the implementation of three new farm laws is against its wish but the direction of the apex court is 'sarva-manya' (acceptable to all) and welcomed the composition of an "impartial" committee to resolve the deadlock.

In an interview to PTI, Minister of State for Agriculture Kailash Choudhary made these remarks and also said he is confident that whatever decision is taken by the court, that will be "taken to ensure that the laws are kept the way they are."

While opposition parties like NCP and DMK welcomed the SC order and hoped that it will help in resolving the deadlock, the Congress leaders expressed apprehensions over the members chosen for the committee, saying they are known for their support to the three Acts and the agitating farmers.

In a statement, All India Kisan Sangharsh Coordination Committee (AIKSCC) said,"it is clear that the court is being misguided by various forces even in its constitution of a committee. These are people who are known for their support to the 3 Acts and have actively advocated for the same."

Congress leader Rahul Gandhi also raised questions over the formation of the committee, asking can justice be expected from people who have given written support to the "anti-agriculture laws". "This struggle will continue till anti-farmer-worker laws are repealed. Jai Jawaan Jai Kisaan," he tweeted.

Addressing a press conference, Congress' chief spokesperson Randeep Surjewala said the party welcomes the Supreme Court's concern over the farm laws, but the party has issues with the composition of the committee formed by it.

He said the members of the committee have already expressed their views in the past favouring the new laws "so the question arises in our minds that how justice will be done to farmers by their hands".

Asserting that any order of the Supreme Court has to be complied with by all the concerned parties, BJP spokesperson Nalin Kohli attacked the Congress for its criticism of the court-appointed committee.

The Congress' stand and conduct on the agricultural laws is a "classic testimony towards its duplicity and opportunistic politics practised since 2005".

The BJP has said the Congress-led UPA government had supported farm reforms but the opposition party has now taken a U-turn due to political reasons.

While staying the laws, the top court set up a four-member committee to resolve the impasse between the Central government and the farmers' unions protesting at Delhi's borders over the legislations.

Addressing a press conference at Singhu (Delhi-Haryana) border, farmer leaders claimed the members of the committee formed by the top court are "pro-government".

"The members of the SC-appointed committee are not dependable as they have been writing on how agri laws are pro-farmer. We will continue our agitation," farmer leader Balbeer Singh Rajewal told the press conference.

"We are against the committee on principle. It is the government's way to distract attention from the protest," he said.

"We welcome the court's order to stay the implementation of the farm laws, but we want a complete repeal of these laws, which is our main demand," said Abhimanyu Kohar, a senior leader of the Sankyukt Kisan Morcha (SKM), an umbrella body of around 40 protesting farmer unions.

Another farmer leader, Harinder Lokhwal, said the protest will continue until the contentious farm laws are repealed.

Senior Congress leader P Chidambram said the concern expressed by the Supreme Court over the farmers' protests is "justified and welcome in the situation created by a stubborn government".

"The decision to form a Committee to help find a solution is well-intentioned. However, the composition of the four member committee is puzzling and sends contradictory signals," he said on Twitter.

Another Congress spokesperson Jaiveer Shergill tweeted, "After Supreme Court stay order, Agriculture Minister must resign as it is the total incompetence, irrational & irresponsible behaviour of the BJP Govt due to which Judiciary had to step in-Stay Order is a tight legal slap on BJP dictatorial law making and imposing mechanism."

Nationalist Congress Party Chief Sharad's Pawar also welcomed the apex court's decision to put on hold the implementation of three farm bills and set up the committee to resolve the issues.

"It is a big relief for farmers and I hope that a concrete dialogue between the Central government and farmers will be initiated now, keeping the farmers interests and wellbeing in mind," he said.

Echoing similar views, DMK chief M K Stalin also welcomed the decision of the Supreme Court, saying this is a victory for farmers protesting across India.

"I once again urge the Union government to commit to repealing the farm laws in the next Parliament Session," he said.

Meanwhile, Punjab Chief Minister Amarinder Singh has asked the state Advocate General to examine in detail the Court order and called a meeting of his cabinet to discuss it, the CM's media advisor said.

The top court has sought the cooperation of the protesting farmers and made it clear that no power can prevent it from setting up a panel to resolve the impasse over the controversial farm laws.

Thousands of farmers, mostly from Haryana and Punjab, have been protesting at several border points of Delhi since November 28 last year, demanding a repeal of the three laws and a legal guarantee to the minimum support price (MSP) system for their crops.

Enacted in September last year, the three laws have been projected by the Centre as major reforms in the agriculture sector that will remove middlemen and allow farmers to sell their produce anywhere in the country.

However, the protesting farmers have expressed their apprehension that the new laws would pave the way for eliminating the safety cushion of the MSP and do away with the "mandi" (wholesale market) system, leaving them at the mercy of big corporates.