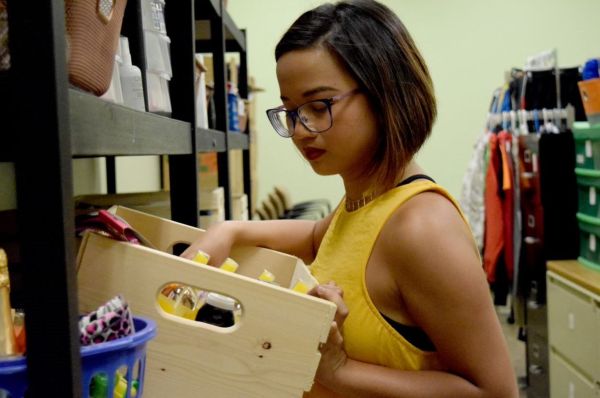 WASHINGTON, America, (Thomson Reuters Foundation): For U.S. student Samantha Kinney, high school is about more than education: It has also given her a support network, a sense of accomplishment — and, at times, even access to daily necessities like food and hygiene products.

Kinney, 18, has dealt with homelessness and housing instability for years, including a time when she lived out of a car with her parents and dropped out of school altogether.

She currently lives with relatives in Kansas City, Missouri - having not seen her parents in a few years - and has restarted school, where she has found a surprisingly nurturing community.

"There were even times when families would 'adopt' me for Christmas, when they would buy me gifts before break," Kinney told the Thomson Reuters Foundation by phone.

Now, the coronavirus pandemic has thrown that support system into flux.

Like most schools across the country, Kinney's school is closed, probably through the end of the school year in June, leaving students in unstable housing situations without the everyday help they rely on, warn homelessness groups.

For many students, those closures have removed a key source of stability, safety, access to food and other resources, as well as the opportunity to gain the skills or a job that could secure their future.

"Schools are survival for children experiencing homelessness," said Barbara Duffield, executive director of SchoolHouse Connection, a nonprofit that works on the issue nationally.

"Now that schools aren't there, and the organizations that schools referred (homeless students) to are closing down or short-staffed, a lot of the most vulnerable populations are more likely to fall through the cracks," she said.

Kinney is one of at least 1.5 million homeless public school students across the country, according to federal statistics released in January for the 2017-2018 school year, the latest available.

That figure is a record high, according to SchoolHouse Connection, up 11% in just a year, and includes a doubling of the number of students in "unsheltered" situations, such as living in cars or on the street.

Those who work with homeless students worry that the pandemic will have an outsized impact on many of them, now and into the future.

More than 90% of schools in the United States have been affected by closures to some degree due to the pandemic, according to trade publication Education Week.

So far, Kinney said she is coping with the changes. She has a computer and stable internet connection at her relatives' house, and has stayed on top of her studies.

Still, the high school senior said she feels the disruption even more starkly than her peers, including the possible cancellation of landmark events such as prom and a formal graduation.

"I really wanted the satisfaction of being able to walk across that stage and being handed my diploma," she said.

Schools have long played a critical, but poorly recognized, role in helping homeless students in the United States, said social workers and activists.

As well as providing homeless students with an education, many public schools "offer other basic supports, including showers, laundry, and even clothing," said Matt Smith of Washington state's Homeless Student Stability Program.

But Dana Bailey, chief operating officer at nonprofit Homeless Youth Connection in Avondale, Arizona, said that homeless youths are more likely to drop out of school - and that the coronavirus outbreak has "turned our organization upside-down".

In Arizona, schools started closing on March 16 for what was going to be two weeks, but has been extended to the rest of the school year.

During the first few weeks of the closure, Bailey and her colleagues focused on the immediate needs of the nearly 290 students they work with.

For students who usually get food through schools, the group dropped off groceries or gift cards that can be used for food and other supplies.

Then, as the schools prepared to start remote learning, Homeless Youth Connection began trying to source essentials like computers and internet hotspots for students who didn't have them.

"Our students come into our program with no stability," said Kayla McCullough, a program manager at the non-profit.

"They don't have what we think of as a home, housing is temporary, food is unreliable and family members are overburdened by trauma caused by homelessness."

Students who face problems at home are often safer at school, McCullough said.

"If there's any danger at home, they get to escape that by going to school ... It's a light at the end of the tunnel for many," she said.

Some community advocates say the public fear surrounding the pandemic is exacerbating homelessness issues, sometimes resulting in people being kicked out of their living situation.

"We're starting to hear from (homeless) parents that there's fear on the part of their hosts, (who are) saying, 'You've been here for six months, and I'm too scared to have you'," said Debra Albo-Steiger, a director at the Project UP-START homeless programme in Miami's public school system.

School closures don't affect only younger students: As colleges and universities across the country have shut classrooms and dorms, many have been confronted with students who have nowhere else to go.

Nearly half of college students are housing insecure, and 16% are homeless, according to Marissa Meyers, a researcher with the Hope Center for College, Community and Justice at Temple University in Philadelphia.

Amid the pandemic, "colleges and universities don't know what to do — they're paralyzed," she said, with most seeing major holes opening in their budgets.

Colleges and universities are projecting a $23 billion decline in revenue next school year due to the coronavirus-related drop in enrolment, according to the American Council on Education industry group.

The federal government recently allotted $14 billion to struggling colleges and universities, half of which must be used to help students pay for things like food, housing, school materials and health care.

Some schools have found a way to keep some of their dorms open for students, at least temporarily.

Middle Tennessee State University spokesman Jimmy Hart said the school has made exceptions for those who can't go anywhere else, including international students and those without reliable internet connections at home.

Berea College in Kentucky, which caters solely to low-income students, is also maintaining housing for about 150 students who could not vacate, according to president Lyle Roelofs.

"No student who had no home to go to or another viable option was asked to leave campus," he said in emailed comments.

Yet Roelofs expressed concern about the longer-term effects of coronavirus-related closures, particularly for poor students.

"My larger fear is that ... the extra curveballs they are facing as a result of the pandemic may seriously degrade their already discouraging prospects," he said

That's a sentiment expressed by many, at all levels of schooling.

Ahead of the next school year, she said, "we're already anticipating a greater number of students needing our services".