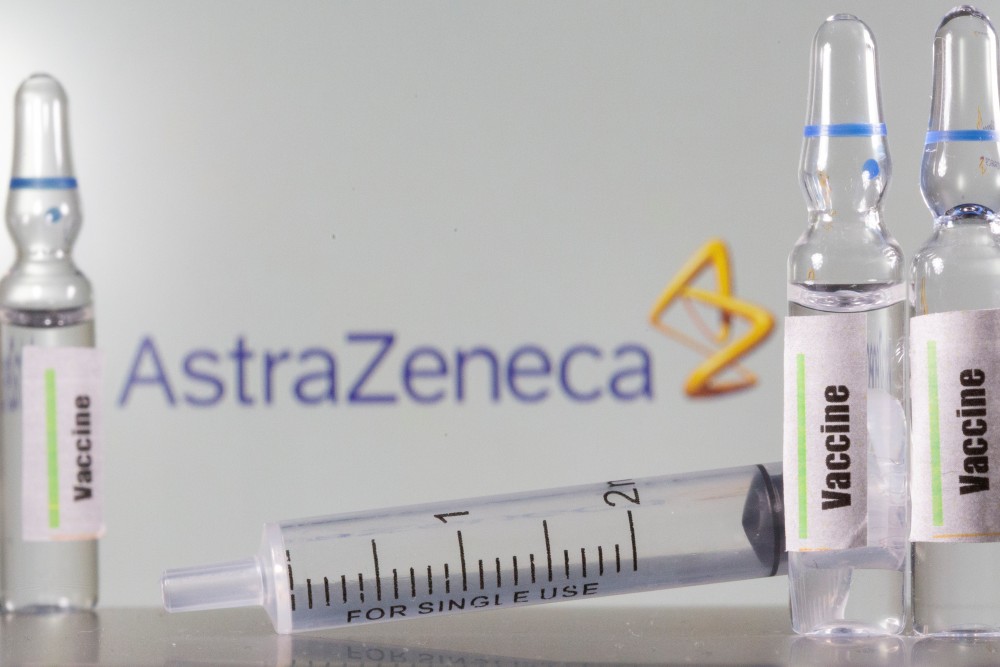 A test tube labelled with the Vaccine is seen in front of AstraZeneca logo in this illustration taken, September 9, 2020. REUTERS/Dado Ruvic/Illustration
India
10th September 2020

MUMBAI, September10 (Reuters):  Serum Institute of India has put on hold trials of AstraZeneca's potential COVID-19 vaccine in the country until the British drugmaker restarts them, the company said on Thursday.

"We are reviewing the situation and pausing India trials," Serum, the world's biggest vaccine manufacturer by volume, said in a brief statement.

AstraZeneca said on Tuesday it had paused trials of its experimental coronavirus vaccine following an unexplained illness in a study participant, but its partner Serum said on Wednesday that trials in India were still ongoing.

The move to pause the trials in India comes after the Drugs Controller General of India (DCGI) V.G. Somani asked Serum for details on the suspension of trials overseas, in a show-cause notice that was reviewed by Reuters.

Somani asked the company to explain why the trials should not be suspended in India until patient safety is established and he warned Serum could face action if it did not offer an explanation.

Serum said on Thursday that it was following the DCGI's directions and would not comment further on the matter.

The DCGI did not respond to an email seeking comment.

The drugs regulator had in August given Serum approval to run Phase II/III clinical trials on the leading COVID-19 vaccine candidate to determine its safety and immunogenicity.

As long as it can resume trials soon, AstraZeneca should still know before the end of the year whether its experimental vaccine protects people against COVID-19, Chief Executive Officer Pascal Soriot said on Thursday.

Meanwhile, AstraZeneca should still know by year-end whether its experimental vaccine protects people against coronavirus, as long as it is cleared to resume trials soon, its chief executive said on Thursday amid doubts over its rollout.

Governments desperate to put an end to the COVID-19 pandemic which has caused more than 900,000 deaths and huge economic and social disruption during 2020 are pinning their hopes on a vaccine.

However British drugmaker AstraZeneca suspended late-stage trials on its potential vaccine this week after an illness in a participant in Britain who was reported to be suffering from symptoms associated with transverse myelitis, a rare spinal inflammatory disorder.

The World Health Organization (WHO) has flagged the AstraZeneca vaccine, which is being developed with the University of Oxford, as the most promising for coronavirus.

CEO Pascal Soriot said during an online event on Thursday that AstraZeneca did not yet know the diagnosis of the participant who was ill, adding that it was not clear if the volunteer had transverse myelitis and more tests were needed.

The diagnosis would be submitted to an independent safety committee and this would usually then say whether trials can be resumed, Soriot said, adding it was usual for such pauses.

"It's very common, actually, and many experts will tell you this," Soriot said, adding: "The difference with other vaccine trials is, the whole world is not watching them, of course. They stop, they study, and they restart."

Shares in AstraZeneca fell on Wednesday after the trial halt raised doubts about the timeline for the vaccine's rollout.

AstraZeneca would supply vaccines to countries at the same time to ensure a fair and equitable distribution, Soriot said, reiterating that the company was close to having capacity to produce 3 billion doses at sites set up around the world to prevent governments from restricting distribution.

With up to 60,000 people set to participate in the study programme, AstraZeneca's CEO said the volume was typical of vaccine trials and large enough to spot rare side effects.

"With this you are going to pick up very rare events." he said, adding that a planned staggered launch, prioritising at-risk groups, would provide further assurance for the masses that are set to be covered by government plans at a later stage.

Serum Institute of India, one of AstraZeneca's development and production partners, said on Thursday it was joining the suspension, backtracking on remarks that it did not face any issues.

'DIFFICULT TO BE SURE'

Transverse myelitis cases after a vaccination have been documented before, but concrete links between the condition and vaccinations have not been established, experts said.

The U.S.-based Mayo Clinic concludes that the association so far is not strong enough to warrant limiting any vaccine.

A 2009 review in the journal Lupus of nearly 40 years of English-language publications found 37 cases of transverse myelitis associated with hepatitis B vaccines, measles-mumps-rubella, diphtheria-tetanus-pertussis and others.

The vaccines remained on the market, Stephen Evans, a professor of pharmacoepidemiology at the London School of Hygiene and Tropical Medicine, said.

Linking such an autoimmune response to a single factor like a vaccine is problematic, he said, given the number of immunological, hormonal or environmental factors at play.

"It's terribly difficult to be sure," Evans said.

"Even a single case could possibly imply a rate or association higher in the study than what is normally observed sporadically" he wrote to investors, adding a one in 10,000 risk, if confirmed, would likely be unacceptable.

BioNTech, among the frontrunners in the vaccine race with partner Pfizer, echoed remarks by Soriot that clinical halts are a common feature of immunisation trials.