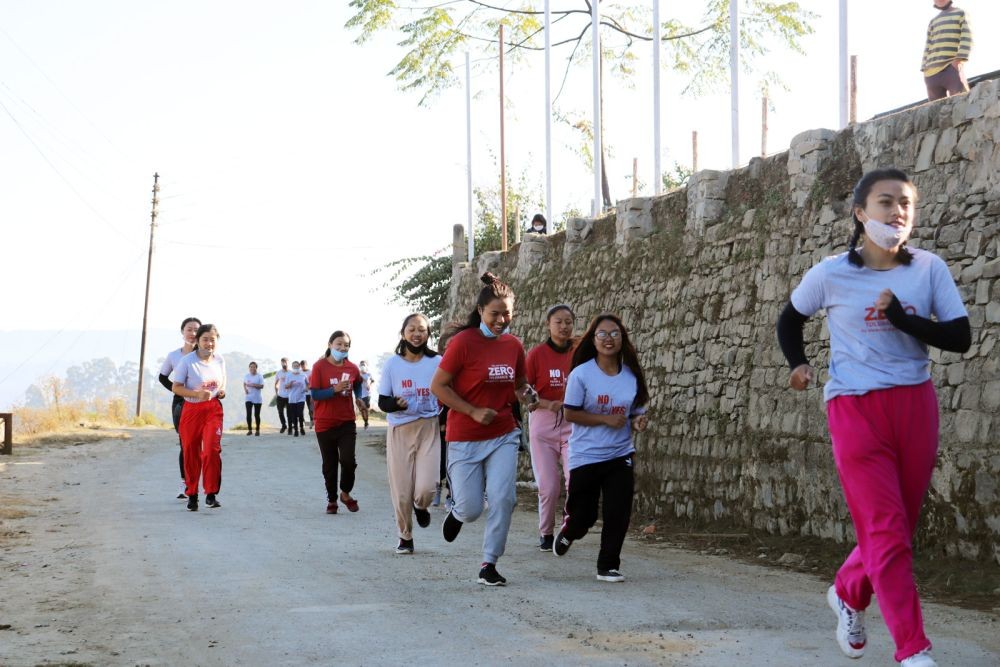 Participants during the ‘Solidarity Run to end Violence against Women and Girls’ in Chizami on December 3. (Photo Courtesy: NEN)
Nagaland
3rd December 2020

Chizami, December 3 (MExN): In observance of the 16 Days of Activism Against Gender-Based Violence (GBV), the North East Network (NEN) Nagaland in collaboration with Chizami Sport Association (CSA) organised a ‘Solidarity Run to end Violence against Women and Girls’ in Chizami on December 3.

NEN members along with 73 youth members from the villages of Chizami, Enhulumi, Sumi and Chizami town participated in the run.

At the start of the run, an awareness programme was held where 110 participants attended.

Colo Mero, President CSA in his welcome note stated “A violence-free community starts with you and me taking responsibility for our action.”

He reminded that men and boys have bigger responsibility to make our society safer for women and girls. He encouraged the boys to take a decision to respect, to love, to support and to protect women and girls. He added, “This Solidarity Run should not be seen as a one-time activity but, the cause and the reason we run for should stay with us till the end of our lives.”

“Violence against women and girls is like a disease- it is preventable but has been ignored for too long,” stated Dr Yelo T Mero, MO, PHC Chizami, in his solidarity speech.

Noting Gender-Based Violence as a public health concern, Dr T Mero highlighted the mental, emotional, psychological and physical health impacts violence has on women and girls. He stated that “Violence affects women’s self-esteem, can often lead to depression, suicides, homicides in extreme cases. It is important therefore talk about these issues, raise wider awareness and build consciousness amongst diverse stakeholder.”

Vekuto Vero, SDO (Civil) Chizami in his speech highlighted the various forms of violence against women as the term ‘violence’ is often perceived as a form of physical injury. Vero pointed that there are numerous gender discriminatory practices in our society, and added that one big concern is the traditional inheritance law where women does not have a say. He encouraged the young participants to recognise such discriminatory practices and not remain silent, but speak up to bring about gender justice in society.

In her keynote address, Wekoweu Tsuhah State Director, NEN Nagaland briefed the participants on the history and significance of observing the 16 Days of Activism against GBV Campaign, and the prevalence of GBV in our community.

She shared that the ‘Solidarity Run’ was organised with the objectives of raising awareness on GBV, and to demonstrate our solidarity with women and girls around the world. She called on young people to ‘break the culture of silence on Violence against Women by speaking up and not ignoring it, because one’s silence encourages violence to continue’.

Besides the Solidarity Run, NEN is organising various activities during the 16 Days Campaign, starting with a virtual exhibition of posters painted by young people on November 25, a seminar on Women’s Reproductive Health and Rights in collaboration with FPAI Kohima on December 8, a Filmmaking Workshop for Young Women on December 7 to 9, and an Awareness Meeting with Community Leaders on December 10  in collaboration with Chizami Women Society, Chizami Town Women Welfare Society and Sumi Women Society.