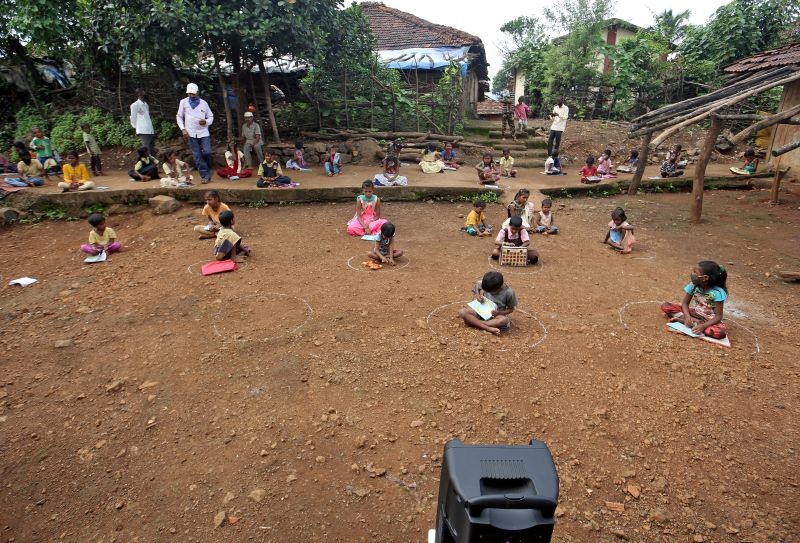 Children, who have missed their online classes due to a lack of internet facilities, sit on the ground in circles drawn with chalk to maintain safe distance as they listen to pre-recorded lessons over loudspeakers, after schools were closed following the coronavirus disease (COVID-19) outbreak, in Dandwal village in the western state of Maharashtra on July 23, 2020. (REUTERS File Photo)
India
4th August 2020

DANDWAL, India, August 4 (Reuters): One overcast morning in a farming village in hilly western India, a group of schoolchildren sat on the mud floor of a wooden shed for their first class in months.

There was no teacher, just a voice from a loudspeaker.

The recorded lessons form part of an initiative by an Indian non-profit spread over six villages that aims to reach 1,000 students denied formal classes since the coronavirus pandemic forced schools to close four months ago.

The children sang rhymes and answered questions, with some of them speaking of the loudspeaker as 'Speaker Brother' or 'Speaker Sister'.

"I love studying with Speaker Brother," said Jyoti, a gleeful 11-year-old girl who attended one session.

Reuters followed the volunteers last week as they carried the loudspeaker through villages in the Indian state of Maharashtra where children awaiting its arrival had gathered at designated, socially-distanced spots.

"We wondered if children and their parents would accept a loudspeaker as their teacher," said Shraddha Shringarpure, head of the Diganta Swaraj Foundation, which has done development work for more than a decade among tribal villages in the region.

But response to the programme, called 'Bolki Shaala' or 'Spoken School' in the state language of Marathi, has been encouraging, Shringarpure added.

It reaches children who are usually the first in their families to go to school, with content covering part of the school curriculum, as well as social skills and English language lessons.

"These kids have no guidance from their family, they are on their own," Shringarpure said.

While many children in cities have been able to attend classes online, those in places like Dandwal, where telecom networks are poor and power supply is often erratic, have gone months without opening schoolbooks.

Parents like Sangeeta Yele, who hope for better lives for their children, are pushing them to attend the mobile classes.

"As the school is closed, my son used to wander in the forests," said Yele.

"'Bolki Shaala' has reached our village and now my son has started studying. I am happy. It gives me happiness that my son can now sing songs and narrate stories."