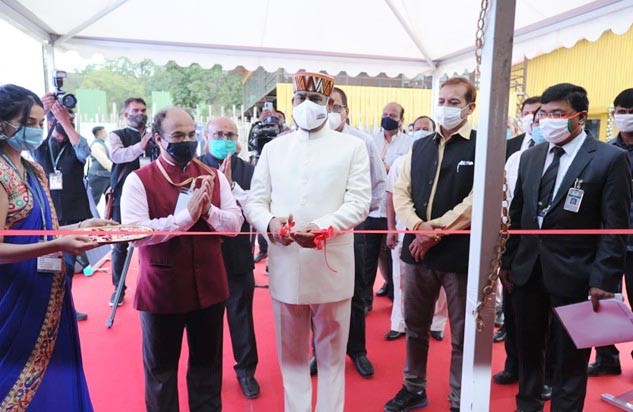 Kevadia, November 27 (MExN): As India celebrated the 71st Constitution Day with enthusiasm with nation-wide reading of the Preamble led by the President Ram Nath Kovind, a Special Exhibition on the Constitution Day at Kevadia in Gujarat, drew appreciation of parliamentarians and legislators.

The exhibition, organized by the Bureau of Outreach Communication of Ministry of Information and Broadcasting in collaboration with the Parliamentary Museum and Archives, as part of the 80th All India Conference of Presiding Officers at the Statue of Unity site in Gujarat, was inaugurated by the Speaker of the Lok Sabha, Om Birla on Wednesday.

The Exhibition traced the journey of democratic tradition in the country, right from Vedic Times, through the Lichchavi republic to the making of Modern India, stated a press release from the Press Information Bureau.

It said that the speaker appreciated the use of multi-media and said interactive exhibitions make information dissemination interesting. ‘The exhibition effectively captures the chronology of the framing of the Constitution and such exhibition should be taken to different parts of the country to create awareness about our democratic tradition,’ he said.

On one of the plasma displays, a visitor could choose to read the Preamble of the Constitution in different Indian languages. A Digital Flip Book gave glimpses of illustrations from the Constitution while a Digital Touch Wall gave information about our various national symbols, and another digital screen displayed the chronology of framing of the Constitution. Another display wall described the influence of other Constitutions of the world in drafting the Constitution of India.

Gujarat Governor Aharya Devvrut wrote in the visitors’ book that “the gallery provides an insight into the tremendous efforts put in by hundreds of visionary leaders. The collection has beautifully shown the artifacts of the past and utilized every possible digital effort to project the same”. Union Minister for Parliamentary Affairs, Coal & Mines, Pralhad Joshi and Minister of State for Parliamentary Affairs Arjun Ram Meghwal and Speakers of various State Assemblies were prominent among the dignitaries who visited the exhibition.

As per the PIB release, the archival display of signatures of Members of the Drafting Committee, key functionaries of the Government and Parliament, portraits of past and present Speakers etc, were other prominent panels. Another highlight of the exhibition was the section on State Assemblies, where a visitor could see and appreciate the architectural beauty and diversity of different State Assembly buildings.

The two-day All India Conference of Presiding Officers at Kevadia ended with resolve to strengthen institutions of democracy and spread awareness among public about the Constitution and democratic tradition of India, it added.