The Nagaland Cabinet held a meeting on April 7 at the Chief Minister’s office at the Secretariat to discuss among others, JCPI memorandum on RIIN, shifting of Dimapur Deputy Commissioner (DC) office Dimapur to the New Complex at Chümoukedima, superannuation age of Nagaland In-service Doctors Association (NIDA) and review on ban of appointments.

However, the meeting concluded without arriving at a definite decision on issues like RIIN implementation, proposed shifting of DC Dimapur office etc. 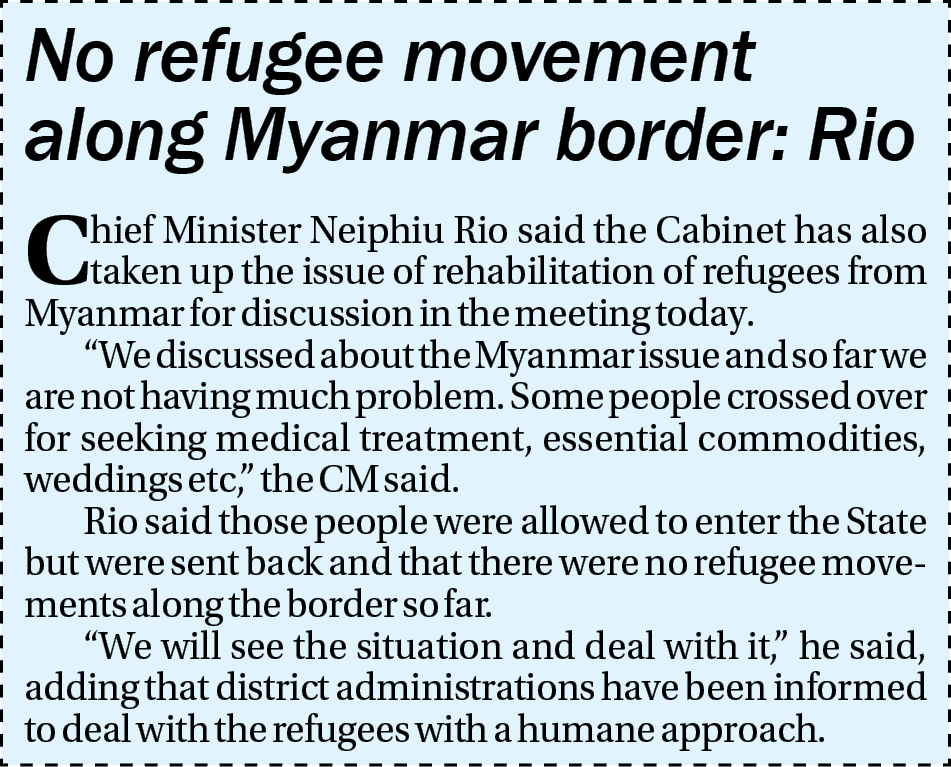 According to an official source, there was no concrete decision on the issue of the implementation of the Register of Indigenous Inhabitants of Nagaland (RIIN) exercise in the State and that the government has decided to have further consultation with all the tribal Hohos, which will be organised soon.

Regarding the NIDA’s demand to the government for superannuation of age since 2016, the Cabinet has once again deferred the issue citing that consultation process is still going on.

As per the source, “the agenda was deferred” as the consultation process is still going on, based on the direction of the last Cabinet meeting.

He informed that the Cabinet will take up the issue when the consultation process is completed.

It may be mentioned that NIDA has written to the state government several times for raising the superannuation age for medical doctors, and has called for a symbolic protest in the form of wearing black arm bands since January 25.

Following the silence of the government, the Association had recently implied at intensifying its agitation if no concrete measure is taken up by the government in the ensuing Cabinet meeting.

Following the freezing of all fresh appointments including vacancies arising against sanctioned posts in all government departments since April 22, 2020 the Cabinet has decided to fill “essential and need-based” posts.

Speaking to media persons, the source said the Cabinet has decided to collect data from every department regarding the essential and need-based posts that need to be filled, which will be done in two weeks time.

Further process in this regard, he said will take place and within a month’s time, the matter will come back to the Cabinet.

On the issue of the proposed shifting of the Dimapur DC’s office to the New Complex at Chümoukedima, he informed that the Cabinet has decided for further consultations by a three-member Ministerial team.

On matter regarding the plot of land in Mawdiangdiang, Shillong acquired by the government of Nagaland for construction of medical lodge, it was informed that the Cabinet wanted further consultations and discussions.

The Cabinet has also approved introduction of new courses in the Government Polytechnics in Mon, Wokha and Peren. The courses approved for introduction are civil engineering, architecture and interior designing.

The State Cabinet has also reportedly approved setting up of a separate High Court for the State.

As per the source, the State government will be taking up the matter with the Government of India for creation of the same.

It may be noted that the foundation stone for the High Court complex in Nagaland was laid in 2007 by then Chief Justice of India KG Balakrishnan in the presence of Chief Minister, Neiphiu Rio.

As per the Annual Administrative Report 2020-21 of Nagaland’s Justice and Law Department, the 15th Finance Commission has been requested to provide sufficient one time lump sum grant of Rs 194 crore to complete the remaining works of the High Court Complex at Meriema, Kohima project in time and to avoid the risk of further escalation and cost overrun.

“This grant of fund if given under special consideration will go long way to accomplish the long cherished needs and longing of the Naga people to have their own separate independent High Court of the State of Nagaland,” the report noted.