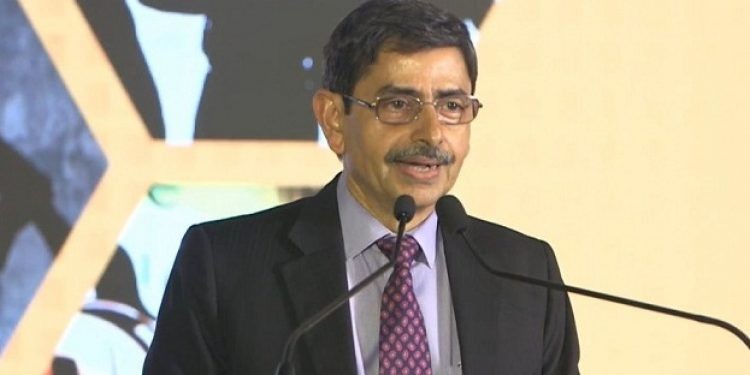 Says Nagaland has come a long way since the 60s

KOHIMA, JULY 2 (MExN): A clearly offended Nagaland state government today issued a press statement in response to a supposedly confidential letter written by the Governor to the Chief Minister on June 16. In the letter, which went viral, Governor RN Ravi pulled up the state government for perceived failings on the law and order vis-a-vis “organized armed gangs” and other development fronts.

According to the press release issued through the DIPR, the state government disagreed on the Governor’s assessment stating “the law and order being precarious and grim and having deteriorated and collapsed since August 2019 does not appear to be factual.”

Before countering the Governor’s assessment, the over 2800-word statement dwelt on the circumstances leading on the formation of Nagaland state, the Indo-Naga political imbroglio and the subsequent events upto the present.

While stating that “the talks are reported to have concluded in October 2019 and accordingly the people are expecting an early political solution,” it held that terming the Naga Political Groups “armed gangs” may not be in the interest of the peace process. It further held that the issue of “sustenance of the political organisations should have been discussed and resolved” with the reported conclusion of the negotiations on October 31, 2019.

Law and order: It said that Nagaland has come a long way despite all the killings and challenges and even assassination bids on legislators to fulfillment of constitutional obligations like participating in elections.

On the law and order situation, it claimed that the state continues to be peaceful. It added that there have been occasions when anti-social elements have reared but the Nagaland Police has been proactively dealing with it. Stating that more than 95 percent of the cases relating to extortion have been registered suo-motu by the Police, it added that anti-extortion cells have been constituted in all the districts.

In addition to the Mobile Highway Patrol units in Kohima and Dimapur, it mentioned the formation of a Special Task Force (STF) to augment operational capabilities for apprehending extortionists.

As suggested by the Governor, it said that a Special Investigation Team for extortion related cases on Highway Construction companies has been functioning since January 21, 2020. While informing that 6 cases have been taken up by the SIT, it said that 4 were registered suo moto and as many as 6 functionaries of the NPGs were arrested. An additional 3 criminal cases have been registered suo-motu and investigation is on, it added.

A Highway Protection Force was also formed in January, 2020 for securing the highways and construction activities, it informed.
It also cited NCRB data stating that number of incidents of serious and heinous crimes occurring in Nagaland has seen a gradual decrease over the years and efforts are on to further minimize incidence. “The total number of IPC offences in 2018 was only 1223 (NCRB DATA), which is 57.3 crime per 1 lakh population, compared with 93.1 in Manipur and 329.7 in Assam.,  it stated. 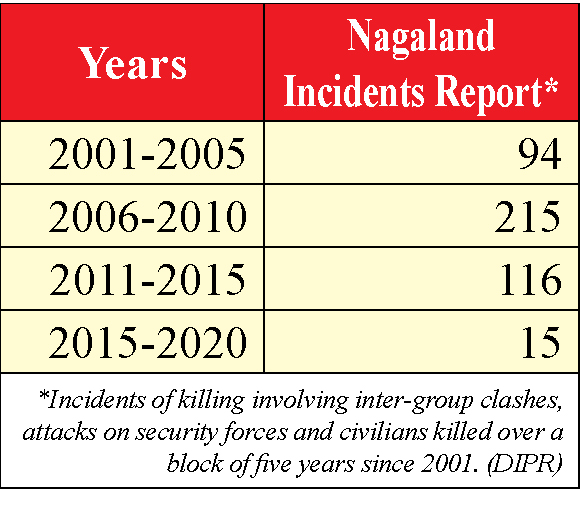 Incidents of killing involving inter-group clashes, attacks on security forces and civilians have reduced drastically over the past 5 years, which it said is reflective of the improved law and order situation. (See box)

Only one such incident was reported in Dimapur in 2019, it said, while adding that the police took swift action averting a major clash.

On encroachment of government forest lands, it mentioned one eviction carried out under Bhandari sub division, Wokha. It added, “Regarding the encroachment of Manglumukh Forest Colony and Intanki National Park, the encroachment dates back to 1993 and since then several attempts were made to evict the encroachers upto 2002. Thereafter some of these areas were converted into NSCN-IM designated camp.

To boost conviction rate, the capacities of Investigation Officers are being enhanced and steps taken for upgrading forensic capabilities.

Price, roads, health: With regard to price, it said that all essential items in Nagaland are sold at or below specified Maximum Retail Price, “while there may be some escalation of construction goods.” It further claimed that most of the essential commodities, construction goods and consumer products are cheaper in Nagaland than in Manipur, Mizoram etc.

On roads, the statement said it has improved, particularly in Kohima and Dimapur, while claiming that the Dimapur-Kohima 4-lane project was making “appreciable progress.”

It said that the state government last reviewed the NHIDCL projects on March 4. “The feedback from the implementing agencies was that DCs and the State government were providing fullest support and cooperation to deal with any problems that they faced in execution of their projects,” it claimed.

On the governmental response to the COVID-19 pandemic, it said that the government machineries and the frontline workers, along with support of the public, have performed in a commendable manner so far. It further said that the state’s health facilities and infrastructure is being improved and upgraded on a war footing.

The state government, it added, is in constant touch with the Central leadership in Delhi as Nagaland joins the rest of the nation and the global community in combating the crisis.

Justification: In light of the aforementioned points, it said that Nagaland is witnessing a period of peace and harmony. “The State law and order machinery is fully aware of its responsibilities to maintain law and order, to provide safety and security to citizens and to control crime in the state on a continuous basis,” it said. “As a matter of fact Nagaland got adjudged the best performing small State in Law and Order by the India Today Group State of State’s survey for two years in a row, " it added.

“There was time in Nagaland when it was difficult to celebrate national days like Independence Day and the Republic Day peacefully in the State. Today, we not only celebrate these national days but also the Annual State Day on a grand scale…”

An increased tourist footfall and holding of sporting events, including national and regional-level, is also indicative of the improved situation, it added.

Art 371 (A) (1) (b): On the question of taking the Governor’s approval for transfers and postings, it said that this was “done away with after a Resolution adopted by the Nagaland Legislative Assembly on 17th December 2013.”

“The State Government is of the view that any decision to put the clock back in contravention of such a Resolution in the guise of discharging special responsibilities under Art. 371 (A) (1) (b) would be against the principles of democracy and would be viewed as anti-people…”