Stranded in relief camp, family hopes for the best 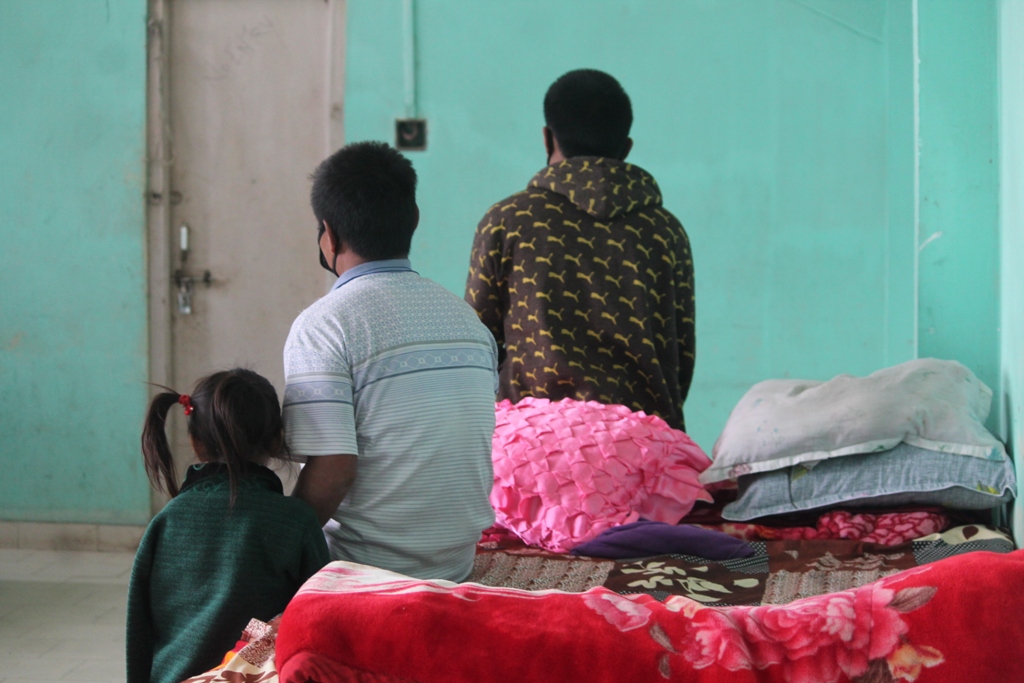 K with his daughter and son at the relief camp set up at Khuochiezie, Kohima Local ground.

57-year-old K (name withheld) and his family from Kiphire have been seeking refuge at the relief camp set up by the Kohima District Administration and the District Disaster Management Authority (DDMA) at Khuochiezie, Kohima local ground.

K and his family who came to Kohima for their daughter's treatment were discharged on April 13, however with the extension of the nationwide lockdown, the family were left stranded and homeless in the Capital.

"With everything else locked down we didn't have anywhere else to go. We have relatives here but colonies have also started to restrict the entry of outsiders. We were helpless, so a relative contacted the District Administration and the DDMA who arranged our stay here at the relief camp," says K who hails from Kiphire town.

His five years old daughter had suffered burnt injuries when she accidently tripped over a stone and fell into a transformer. "The left side of her body was all burnt and she couldn't move for months. We have spent over Rs60,000 for her treatment,” he says.

K, who is in the Nagaland Police, has been on leave for the last few months to look after his daughter. “I have five kids. She is the fourth child," he says.

The injury took almost three months of treatment. She was first admitted at the Dimapur District Hospital, then they were moved to the Naga Hospital Authority Kohima (NHAK) after almost a month of treatment. The family had sought treatment at NHAK when they were told to vacate the hospital for the COVID 19 pandemic preparation on March 30.

Even with the subsidized rate of Rs. 3000, the amount has taken a huge toll on the father who has to take care of his daughter's treatment in Kohima while at the same time look after the rest of his family in Kiphire.

"We had already planned to leave for our hometown yesterday and even arranged a vehicle when the extension of lockdown was announced. We were told that we can't go back neither can others return from there," says K whose plight remains far from over as he still needs to take his daughter to the hospital every alternate day for dressing her wound.

Till the filing of this report, K and his family are the only ones residing at the relief camp initiated by the Kohima District administration and DDMA, Kohima. Not only has the family found a place to stay but essential commodities have also been provided.

ADC Kohima,Lithrongla T Rutsa informed that the Kohima local ground and Indira Gandhi Stadium, Meriema has been designated as relief camps with more rooms being arranged should the need arise.