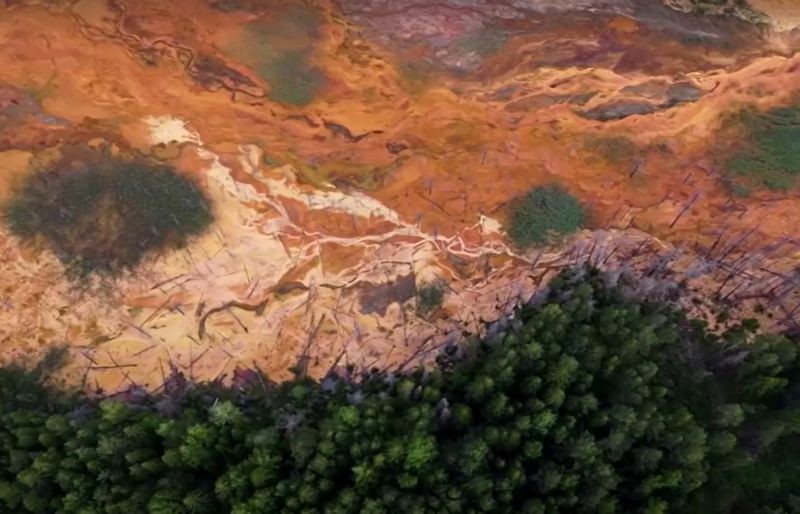 Drone footage shows an acid spill in an area around the Levikhinsky Mine in Sverdlovsk Region, Russia on July 17, 2020. (REUTERS Photo)
World
23rd July 2020

MOSCOW, July 23 (Reuters): Russian prosecutors have launched an investigation into a toxic leak from a mine abandoned 16 years ago in the Ural mountains, after images from the area showed a landscape burnt bright shades of red and yellow by streams of chemical waste.

The mine and its impact on the surrounding area came to renewed public attention this year after a popular blogger shared pictures of the site.

Russian prosecutors in the region said they are investigating the enterprise that was supposed to be treating the leak.

Until it was abandoned in 2004, the Levikhinsky mine extracted copper ore in the mineral-rich, mountainous Sverdlovsk region, 1,400 kilometres (869.92 miles) east of Moscow.

An accident in 1997 caused the mine to flood, local ecologist Andrei Volegov told Reuters, and the consequences were never fully resolved.

Now, water continues to come up through the mine shafts and enters into a chemical reaction close to the surface of the ground. This produces a highly acidic mixture that then seeps across the landscape in brightly-coloured streams and enters local water sources, according to Volegov.

"This sulphuric acid, it burns out everything in the area, it burns the soil and the trees. It destroys the surface layer, the grass. Fish die," Volegov said.

The issue of the abandoned mine has been broached by Russian state environment watchdog Rosprirodnadzor on at least three occasions, records showed.

A chemical analysis of the liquid seeping from the mine was conducted by the local prosecutor's office in 2010, revealing a high concentration of pollutants in the water, archive records showed.

A special reservoir was constructed to process fluids from the mine, but residents said it has not been up to the job, with toxic liquid polluting local water sources.

"All of it goes into the river, all this acid. There are no fish there now, there's nothing there," one resident said.

A spokeswoman for the Sverdlovsk region prosecutor's office said the station responsible for the reservoir was currently being investigated.

Volegov said prosecutors had told him the clean-up process had not been sufficiently funded.