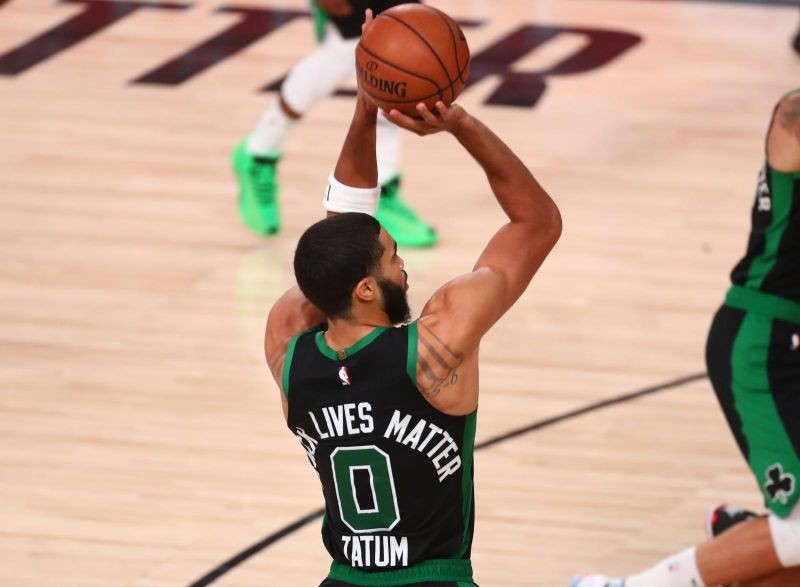 Boston Celtics forward Jayson Tatum (0) shoots against the Miami Heat during the second half in game five of the Eastern Conference Finals of the 2020 NBA Playoffs at AdventHealth Arena. (USA TODAY Sports Photo via Reuters)
Sports
26th September 2020

(Reuters/Field Level Media): The Boston Celtics erased a halftime deficit and cut into their series deficit with a Jayson Tatum-led third-quarter surge Friday night, staying alive in the Eastern Conference Finals with a run-away 121-108 victory over the Miami Heat on Friday night near Orlando.

Tatum finished with a game-high 31 points, including 17 in the third quarter when the third-seeded Celtics erupted for 41 points after having been held to 51 in the first half.

“We knew we had to play better. We were fighting for our life. It was going to take a collective effort in the second half, and that’s what we did,” Tatum said.

The win sends the clubs to a Game 6 in the best-of-seven on Sunday night, with the fifth-seeded Heat retaining a 3-2 advantage and needing just one more win to advance to their first NBA Finals since 2014.

“Our deal was to come out and play, come out and compete,” Celtics coach Brad Stevens said. “Give it our best shot. I thought we played pretty well in the second half. We’re going to have to do it again and again because of the position we’re in.”

The Celtics are attempting to overcome a 3-1 series deficit for the first time since using a finishing three-game sweep to eliminate Philadelphia in the 1981 Eastern Finals en route to the NBA championship.

“Being down 3-1 is not fun. We’ve got to take it one game at a time. We’re not trying to win three in a row. We’ve got to give ourselves a chance,” Tatum said after the game.

The Celtics trailed by as many as 12 points in each of the first two periods and 58-51 at halftime, but then needed just 3:46 of the third quarter to draw even after a Bam Adebayo hoop had extended the margin to nine on the second half’s first possession.

Jaylen Brown and Daniel Theis had hoops and Kemba Walker two free throws before a 3-pointer by Marcus Smart drew the Celtics even at 60-all.

Brown added a go-ahead basket 24 seconds later, and when Tatum dropped in two free throws, the Celtics had used a 13-0 flurry to take a lead they never relinquished at 64-60.

Miami hung within 97-89 with still 8:55 to play, but Brown slammed the door with consecutive 3-pointers, allowing the Celtics to coast home with their second win in the last three games.

Heat coach Erik Spoelstra said the Celtics “played great in the second half. They deserved and earned what they got. We understand how tough it is to win in the playoffs.”

“We did not compete hard enough defensively, and we paid the price for that,” Spoelstra said.

Brown and Theis played key supporting roles for Tatum, who completed a double-double with 10 rebounds. Brown drilled four 3-pointers to pad his 28-point total, while Theis chipped in with 15 points and a game-high 13 rebounds.

Walker added 15 points and Smart 12 to go with eight rebounds, a team-high eight assists and a game-high four steals for the Celtics, who despite the 3-1 deficit had entered the game dead-even in total points in the series with the Heat.

Gordon Hayward contributed 10 points off the bench for the Celtics, who outscored the Heat 36-21 on 3-pointers.

Goran Dragic had a team-high 23 points and Duncan Robinson 20 for the Heat, who lost just once in the first two rounds. Seventeen of Robinson’s points came in the first half.

Herro was coming off a 37-point performance in Game 4.