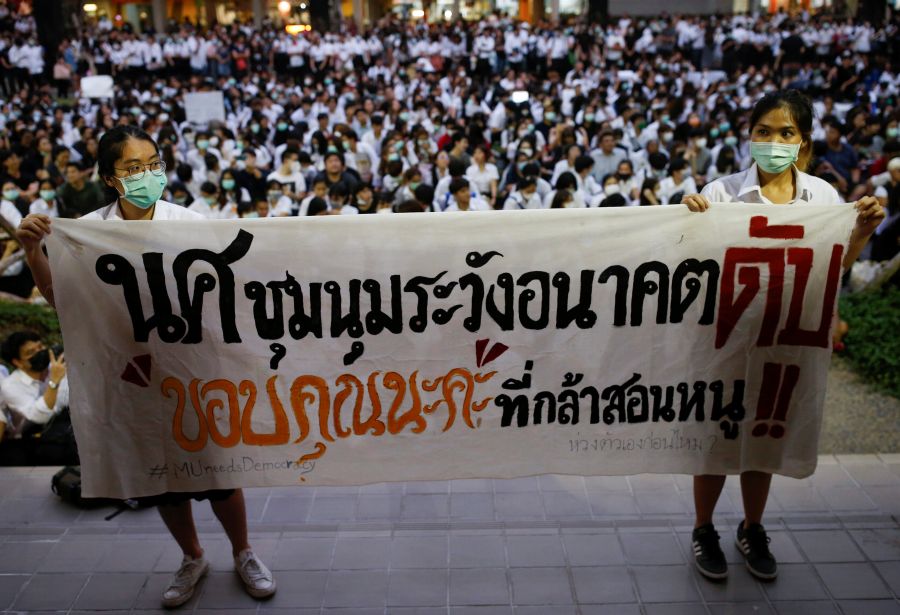 Thai students protest against a court's decision that dissolved the country's second largest opposition Future Forward party, less than a year after an election to end direct military rule, at Mahidol University, outside Bangkok, Thailand on February 25. (REUTERS Photo)

The accusations provoked Prime Minister Prayuth Chan-ocha to walk out of a heated parliamentary debate on Tuesday after a lawmaker of the outlawed opposition Future Forward Party presented documents that he said bore out the claims.

"I don't know about this, I don't have this type of policy," Prayuth told reporters on Wednesday, referring to the documents.

He read from what he said were two leaked military memos that ordered army personnel to create fake social media accounts to "offer counternarrative" for criticism of the government.

Reuters has not examined the documents.

"The army works in the open and we don't use avatars," Lieutenant General Thanya Kiatsarn, of the second army area command, a unit the opposition said figured in one of the memos, told the Khaosod newspaper.

Some soldiers may be using social media to defend the reputation of the military but the effort was not centrally organised, he added.

Prayuth's coalition majority was strengthened by the disbanding last week of Future Forward, the third-largest party in parliament, on the grounds that the party breached the law when it took a loan from its founder.

The dissolution has sparked daily protests among university students who are among the party's most vocal supporters.

Following Friday's court ruling to dissolve the party, its members have launched a string of accusations against Prayuth and the former military junta he led for five years before elections in 2019.

The ruling banned from politics 11 party lawmakers who lost their seats, while giving the 65 remaining MPs 60 days to either form a new party or join an existing one.