Thousands of Indonesians protest against passage of jobs bill 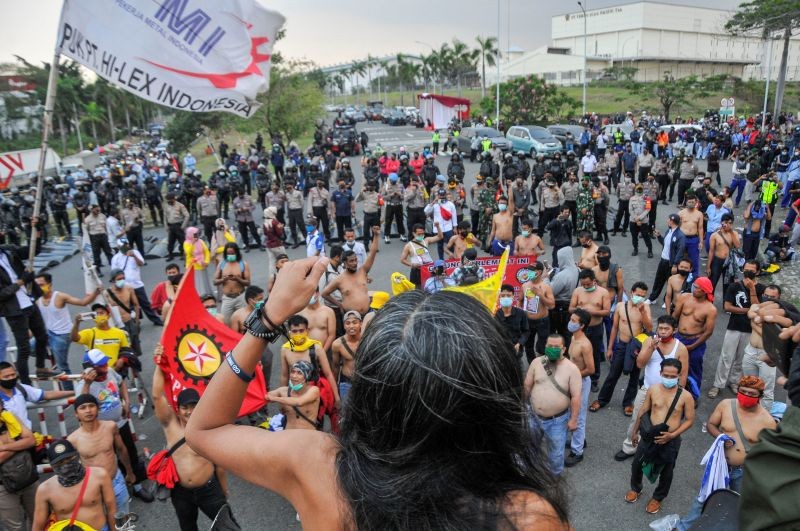 JAKARTA, October 6 (Reuters): Thousands of Indonesians took the streets of several cities on Tuesday to protest the passage a day earlier of a jobs law they say is too pro-business, but which the government has promoted as vital to attract investment.

The passage also came a day before the start of a three-day national strike which unions expected to involve two million workers in protest against the bill.

Demonstrations began on Tuesday in industrial areas around Jakarta including Tangerang and Karawang and on Batam island, home to many electronics plants, local media reported.

So far, workers have been unable to protest in front of parliament in Jakarta as planned. Police have sought to block protesters citing the need to contain the novel coronavirus.

"The law will definitely affect the status of our employment," said Anwar Sanusi, a member of FSPMI trade union in Tangerang, who took part in a rally with 400 others.

People fear losing pensions and insurance if they are made contract workers for life due to the law, Sanusi told Reuters.

The law removes the three-year maximum duration of contracts and reduces severance benefits - provisions the government said are intended to promote formal hiring. Other reforms include longer working hours and changes to mandatory paid leave.

Indonesian markets cheered the passage of the bill, with the main stock index <.JKSE> up as much as 1.31% and the rupiah reaching as high as 1.28%, its strongest in a month.

Deputy Finance Minister Suahasil Nazara, speaking at a banking conference on Tuesday, said the law was meant to support the business community "to move forward and create many jobs".

Citibank in a research note said the law simplifies business licensing and addresses restrictive trade and labour policies. However, it said immediate foreign investment was unlikely in the currently depressed global economic climate.

Trimegah Securities economist Fakhrul Fulvian said banks and export-oriented industries should benefit from the law, while consumer and retail sectors may be pressured as workers may increase savings to compensate for changes in labour rules.

However, many Indonesians lashed against the law out on Twitter, with one trending hashtag incorporating an expletive against parliament and another calling lawmakers traitors.

"Many in the public reject it," he said at a virtual news briefing. "I don't think the president wants to change his stance, given he was the person most desperate for the bill to pass. Our hope is with this pressure, he will consider not signing it."