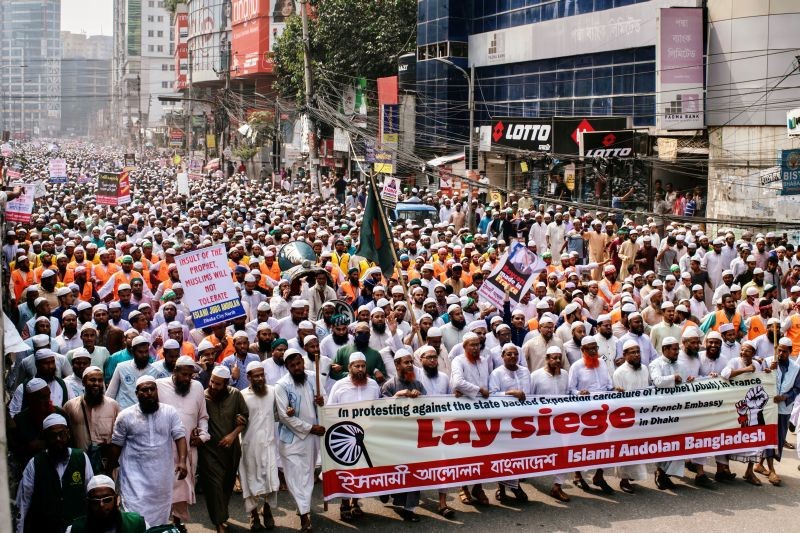 Supporters and activists of the Islami Andolan Bangladesh, an Islamic political party, take part in a protest calling for the boycott of French products and to denounce the French President Emmanuel Macron for his comments over a cartoon of Prophet Mohammad, in Dhaka, Bangladesh, October 27, 2020. (REUTERS Photo)

DHAKA, October 27 (Reuters): Thousands of Muslims took to the streets of the Bangladesh capital on Tuesday to protest against remarks by French President Emmanuel Macron in a row about cartoons of the Prophet Mohammad.

The dispute has its roots in a knife attack outside a French school on Oct. 16 in which a man of Chechen origin beheaded Samuel Paty, a teacher who had shown pupils the cartoons in a civics lesson on freedom of speech.

France has allowed displays of the cartoons, which are considered blasphemous by Muslims.

Macron paid tribute to Paty, describing him as a "quiet hero" dedicated to instilling the democratic values of the French Republic in his pupils.

Protesters in Dhaka unfurled placards with caricatures of Macron and shouted slogans, demanding an unconditional apology and the ouster of the French ambassador.

Many carried placards bearing messages such as "Stop Islamophobia", "Boycott France" and "Lay siege to the French Embassy in Dhaka" as they marched towards the French embassy before police stopped them.

"Muslims will not let this go in vain," said Atiqur Rahman, a spokesman for the Islami Andolan Bangladesh, a rightwing group.

"He (Macron) needs mental treatment. He has not only made himself the enemy of Islam, but of all peace-loving people too," he said, while calling for a boycott of French products.

France warned its citizens living or travelling in some Muslim-majority countries to take extra security precautions on Tuesday as anger surged over the cartoons.

After the beheading, Macron declared war on "Islamist separatism", which he believes is taking over some Muslim communities in France.

But Macron's call has angered Muslims in many countries and sparked protests and calls for boycotts of French goods.

Pakistan's parliament on Monday passed a resolution urging the government to recall its envoy from Paris, hours after its Prime Minister Imran Khan it out at Macron for "attacking Islam".