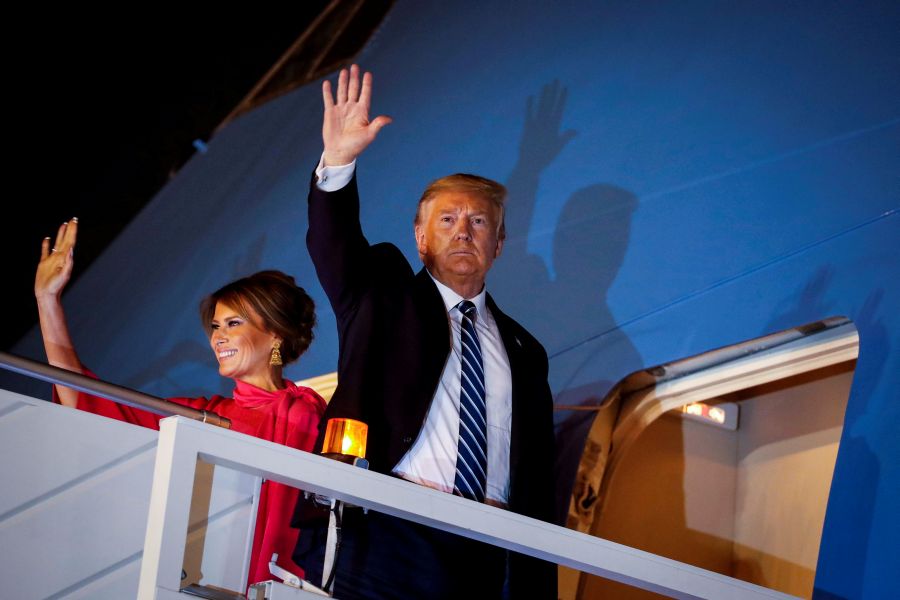 U.S. President Donald Trump and first lady Melania Trump wave as they board Air Force One as they conclude their two day visit to India, at Air Force Station Palam in New Delhi on February 25, 2020. (REUTERS Photo)

Trump, back from a 2-day visit to India, said on Twitter that he would meet with U.S. officials for a briefing on the coronavirus later on Wednesday and hold a news conference.

Dr. Anthony Fauci, the head of the National Institute of Allergy and Infections Diseases who will brief the president, said while the virus is contained in the United States, Americans need to get ready for a potential outbreak.

As person-to-person transmissions spread in other countries outside of China, including South Korea, Japan, Italy and Iran, the coronavirus is likely to spread further, he said.

"Things are stable here ... and at the same time we need to be ready to do things to contain an outbreak if it were to occur, Fauci told CNN in an interview.

Officials at the U.S. Centers for Disease Control and Prevention (CDC), in a shift, on Tuesday said the virus' march across the globe had raised concern about community spread in the United States, even as it remained unclear if and when that might happen, or how severe it might be.

The Republican president has been largely out of Washington since Feb. 18, first visiting a string of western U.S. states before heading off to India.

During his travels, he praised U.S. health officials while publicly downplaying the possible spread of the virus and its impact on financial markets, saying he hopes it will disappear with the arrival of warmer spring weather in the United States.

Trump has been increasingly alarmed at the drop in the stock market, which he considers a key barometer of economic health.

He has repeatedly touted his administration's decision to bar foreign travelers who had been to China within the virus' 14-day incubation period and to funnel flights from China to specific airports for screenings.

CDC officials, who Trump said would be at the 6 p.m. (2300 GMT) White House news conference, have advised Americans to not visit China and South Korea, and to exercise caution when traveling to Japan, Italy or Iran.

The CDC is also considering expanding airport screenings to target passengers from countries that have seen a recent spike in cases such as Italy and South Korea, NBC News reported, citing the agency.

Meanwhile, the Trump administration is seeking $2.5 billion from Congress to boost its virus response, but Democrats have warned that amount falls far short of what is needed.

Trump's request also included $1 billion for a vaccine, something Fauci told CNN was in development but would take at least 18 months "at best" to come to market.