Trump: U.S. will maintain presence in Afghanistan even if deal reached with Taliban 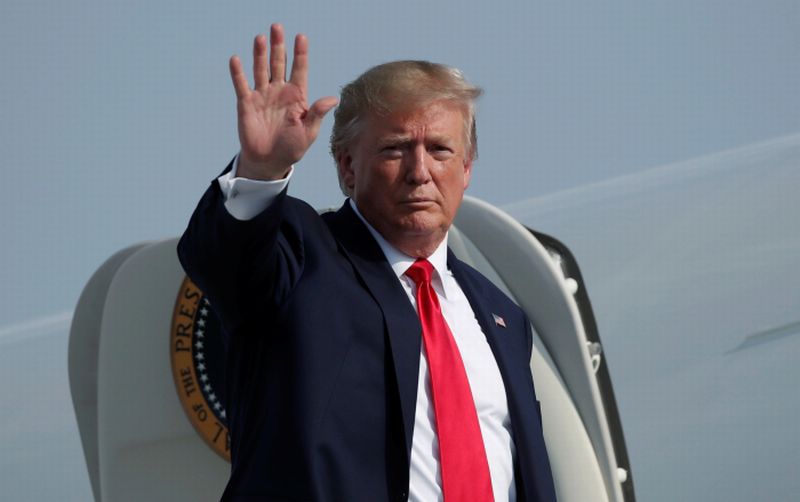 Trump: U.S. will maintain presence in Afghanistan even if deal reached with Taliban
World
29th August 2019

U.S. President Donald Trump waves as he boards Air Force One upon departure after the G7 summit in Biarritz, France on August 26, 2019. (REUTERS Photo)

WASHINGTON, August 29 (Reuters): President Donald Trump said on Thursday that U.S. troop levels in Afghanistan were being reduced to 8,600 but that American forces would remain in the country even if Washington reaches an agreement with the Taliban to end the 18-year war.

Trump said the U.S. force level in Afghanistan was being reduced to 8,600 "and then we make a determination from there as to what happens." Some 14,000 U.S. service members are currently in Afghanistan, among whom about 5,000 are dedicated to counterinsurgency operations.

The Taliban said on Wednesday it was close to a "final agreement" with U.S. officials on a deal that would see U.S. forces withdraw from Afghanistan in exchange for a pledge that the country would not become a haven for other Islamist militant groups.

"We hope to have good news soon for our Muslim, independence-seeking nation," Suhail Shaheen, a spokesman for the Taliban's political office in Doha said.

Both U.S. and Taliban negotiators have reported progress in their talks in recent weeks, raising the prospect of an end to the conflict. Zalmay Khalilzad, the U.S. special representative for peace in Afghanistan, was due to travel from Doha to Kabul this week for a meeting with Afghan leaders.

The United States invaded Afghanistan in 2001 and ousted its Taliban leaders after they refused to hand over members of the al Qaeda militant group behind the Sept. 11 attack on the World Trade Center and the Pentagon.

Since becoming president in January 2017, he has repeatedly said he could end the Afghanistan war quickly if he didn't mind killing millions of people, a claim he repeated in the interview with Fox News radio.

"We could win that war so fast if I wanted to kill 10 million people ... which I don't. I'm not looking to kill a big portion of that country," Trump said.

He denied the United States was acting too quickly by reducing troop levels, something he criticized his predecessor, Barack Obama, for doing in Iraq.

"We have to watch Afghanistan, but we're bringing it down," he said.

Trump warned that any attack on the United States again from Afghan territory would bring a massive response.

"We will come back with a force like they've never seen before," Trump told Fox News radio.

On Wednesday, the top U.S. military officer, Marine General Joseph Dunford, told reporters that it was too early to talk about the future of U.S. counterterrorism troops in Afghanistan.

"I honestly think it's premature to talk about what our counterterrorism presence in Afghanistan may or may not be without a better appreciation for what will the conditions (be)," said Dunford, the chairman of the Joint Chiefs of Staff.

He said that in the current security environment, local Afghan security forces needed U.S. support to deal with the violence.

"If an agreement happens in the future, if the security environment changes, then obviously our posture may adjust," Dunford said.