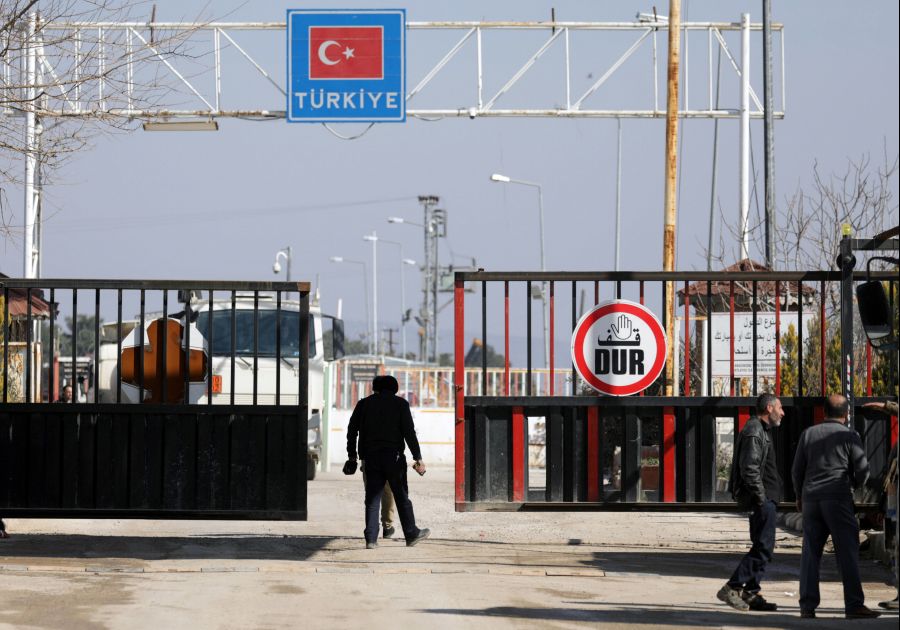 People walk at the Bab el-Salam border crossing between the Syrian town of Azaz and the Turkish town of Kilis, in Syria on February 20, 2020. (REUTERS Photo)

ANKARA/ISTANBUL, February 28 (Reuters): Turkey will no longer stop Syrian refugees from reaching Europe, a senior Turkish official said, as Ankara responded on Friday to the killing of 33 Turkish soldiers in a strike by Syrian government forces in Syria's northwestern Idlib region.

Opening the frontier could unleash a repeat of the migration crisis of 2015-2016, when more than a million people arrived by sea in Greece and crossed the Balkans on foot, until Turkey shut its frontier in a deal with the EU.

By the early hours of Friday, refugees and migrants were already making their way to frontier posts. The official said police and border guards had been told to stand down and allow exit by both land and sea.

One column of migrants made their way towards the frontier on foot in the early morning light, with one man carrying a small child in his arms. Others headed there in taxis.

"We heard about it on the television," said Afghan migrant Sahin Nebizade, 16, in a group packed into one of three taxis parked on a highway on the outskirts of Istanbul.

"We've been living in Istanbul. We want to go to Edirne and then on to Greece," Nebizade said before the taxis headed for the northwestern province of Edirne and border crossings with Bulgaria and Greece, 200 km (124 miles) west of Istanbul.

A million civilians have been displaced since December inside Syria near the Turkish border in desperate winter conditions, perhaps the worst humanitarian crisis of the nine-year war. Turkey is already home to 3.7 million Syrian refugees and says it cannot take more.

Syrian government forces, backed by Russian air power, have launched an assault to capture the northwest, the last remaining territory held by rebels who are backed by Turkey. With diplomacy sponsored by Ankara and Moscow in tatters, NATO-member Turkey has come closer than ever in the conflict to direct confrontation with Russia on the battlefield.

Ankara's fury over Thursday's attack -- the deadliest suffered by the Turkish army in nearly 30 years -- raised the prospect that President Tayyip Erdogan will launch a full-scale operation against the Russian-backed Syrian army.

"We have decided, effectively immediately, not to stop Syrian refugees from reaching Europe by land or sea," said the official, who requested anonymity. "All refugees, including Syrians, are now welcome to cross into the European Union."

Syria's civil war has worsened dramatically in recent months despite largely vanishing from the agenda of Western countries. Since 2016, Europe has relied on Turkey to halt the flow of refugees, and for several years the West has left responsibility for diplomacy in the hands of Moscow and Ankara.

Any mass movement of people into Europe would create a new crisis for the EU, whose leaders have been contemplating restrictions on internal borders and public gatherings to cope with the coronavirus outbreak. Greek government sources said land and sea borders with Turkey were being tightened.

Erdogan has repeatedly threatened to open the gates for migrants to travel to Europe, reversing a pledge Turkey made to the EU in 2016.

The United Nations and others have called for an immediate ceasefire, but three rounds of talks between Ankara and Moscow have failed to reach a deal, and the fighting has raged on.

Turkey has sent thousands of troops and heavy military hardware into Idlib in recent weeks, and Erdogan has warned that Turkey would repel President Bashar al-Assad's forces unless they pulled back from Turkish observation posts in the region.

The air strike on Thursday raised Turkey's military death toll to 54 in February in Idlib. The governor in Turkey's border province said 32 other troops were wounded. It was the worst losses suffered by the Turkish military since a 1993 attack by Kurdish separatist guerrillas.

Turkey's defence minister, Hulusi Akar, said the attack occurred despite coordination with Russian officials on the ground and continued even after the alarm was sounded following the first strike.

Turkey's communications director, Fahrettin Altun, said that in retaliation, "all known" Syrian government targets were being fired on by Turkish air and land support units.

Russia's Defence Ministry said the Turkish troops hit by shelling should not have been in that area and Ankara had not informed Moscow in advance about their location. A senior Russian lawmaker said any full-scale Turkish military operation in Idlib would end badly for Ankara.

Amid the mounting crisis over Syria, Turkey's lira slid to a 17-month low and its main stock index plunged 10% early on Friday even though authorities banned short selling across all Turkish shares.

The State Department said the United States was very concerned about the reported attack on Turkish soldiers and stood by "our NATO ally Turkey".