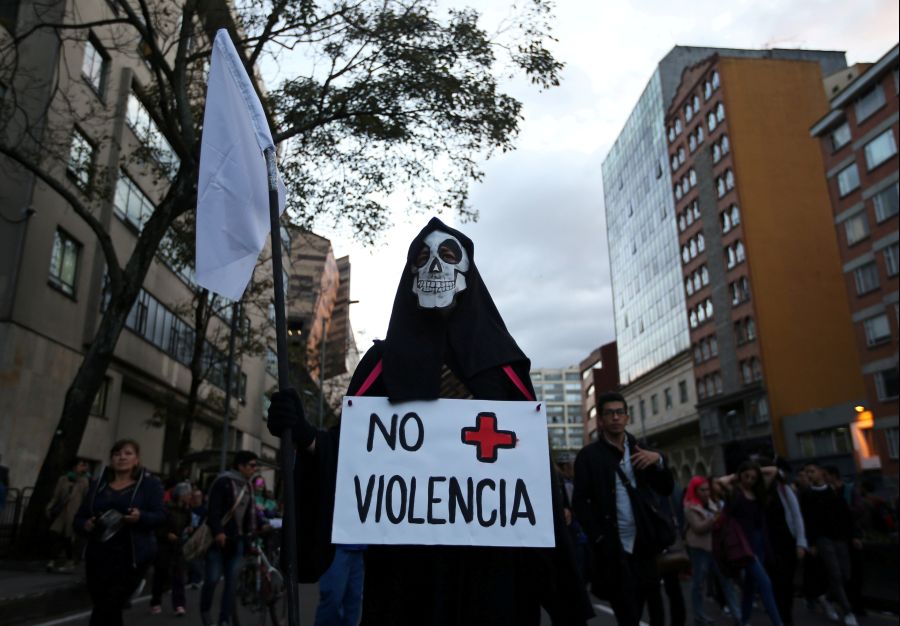 A demonstrator holds a placard reading "No Violence" during a protest march as a national strike continued in Bogota, Colombia on November 25, 2019. (REUTERS File Photo)

BOGOTA, February 27 (Reuters): Killings of women engaged in community organising and defending human rights in Colombia increased nearly 50% in 2019 compared to the year before, the United Nations said on Wednesday as it urged the government to redouble protection efforts.

Violence against so-called "social leaders" has become a top issue for the government of President Ivan Duque, who has faced frequent criticism from the international community, non-governmental organizations and human rights activists for not doing enough to stop the killings.

Last year, 108 human rights defenders of all genders were killed, the Office of the United Nations High Commissioner for Human Rights told journalists, while a further 10 cases were still being verified.

Fifteen of the activists murdered were women.

"We are alarmed that in 2019 the killings of women human rights defenders increased close to 50%," said Alberto Brunori, the U.N.'s human rights chief in Colombia.

"The quick and effective implementation of a comprehensive program of guarantees for women leaders and women human rights defenders could be an important tool for prevention and protection against murders and attacks," he added.

The number of activist killings has fallen overall since Duque took office in August 2018, the centre-right president told journalists at a breakfast event on Wednesday.

"There is a reduction, but the figure should be zero," said Duque. He blamed the killings on Marxist-led National Liberation Army rebels, dissidents from the FARC rebel movement who reject a 2016 peace deal, and criminal gangs involved in drug trafficking and illegal mining.

There were 36 massacres - defined as the killing of more than four people - in Colombia last year, the highest figure in the last five years, the U.N. rights office said.