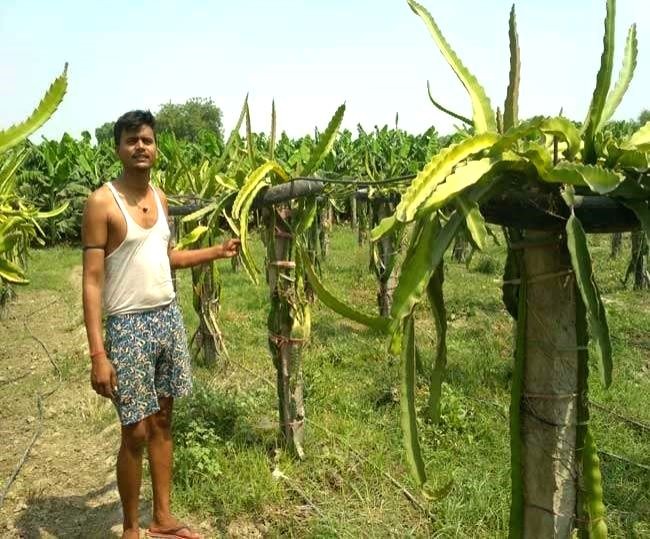 LUCKNOW, NOVEMBER 20 (IANS): Four years ago, Ram Sakal Yadav, a young farmer in Uttar Pradesh's Kaushambhi district, had almost packed his bags. He was set to migrate to Mumbai in search of a job that would ensure him a steady income.

"Our agricultural income was reducing and the family was increasing. I had no option but to migrate and feed the family", he recalls.

It was then that a district official in Kaushambhi persuaded Ram Sakal Yadav to stay back and try out an alternative.

The then district magistrate, Akhand Pratap Singh, had got saplings of the dragon fruit from West Bengal and he encouraged Yadav and other farmers to plant it.

Initially, not many were willing to experiment but later about 60 farmers agreed to plant the sapling.

"Within 18 months, the fruits appeared. No one in the village had seen these types of fruits. The district magistrate made arrangements to send the fruit to Mumbai and Delhi and then the profits started pouring in", says Yadav.

Sources, however, insist that the first crop of the fruit was consumed by farmers from the district who wanted to savour its taste.

With help from horticulture experts, the local farmers not only started planting trees but even started cultivating saplings that could be exported.

"Degan phal', (as the fruit is known in local parlance) ne hamari kismat badal di", says Binda Devi, a 62-year-old widow, who has a daughter-in-law and four grandchildren to take care of after her son abandoned them and left home four years ago.

Explaining the technique of dragon fruit farming, Binda Devi says that the tree is very fragile and needs to be supported by wooden planks.

"You can use one wooden plank to support four trees that require mild watering. The fruits start appearing by the end of 18 months and each tree can yield up to 60 to 120 fruits. The officers have helped us understand the details of 'degan phal' farming", she says.

Horticulture expert D.K. Trivedi said that the soil of Kaushambhi was conducive for dragon fruit farming.

"The fruit, also known as 'pitaya', sells in big cities at Rs 350 to 500 per kilogram and the only major cost of cultivation is the wooden planks that are needed to support the tree. One tree yields fruits for several years and animals do not eat it because of the thorns around it", he said.

The fact that dragon fruit is said to be helpful in the treatment of diseases like diabetes and asthma and has anti-ageing and anti-cancer properties, has also made it popular in the region.

A horticulture expert, Mewa Ram, meanwhile, says that there are about 7,500 dragon fruit trees now in Kaushambhi and the fruit from here is sold in Mumbai, Delhi and Madhya Pradesh.