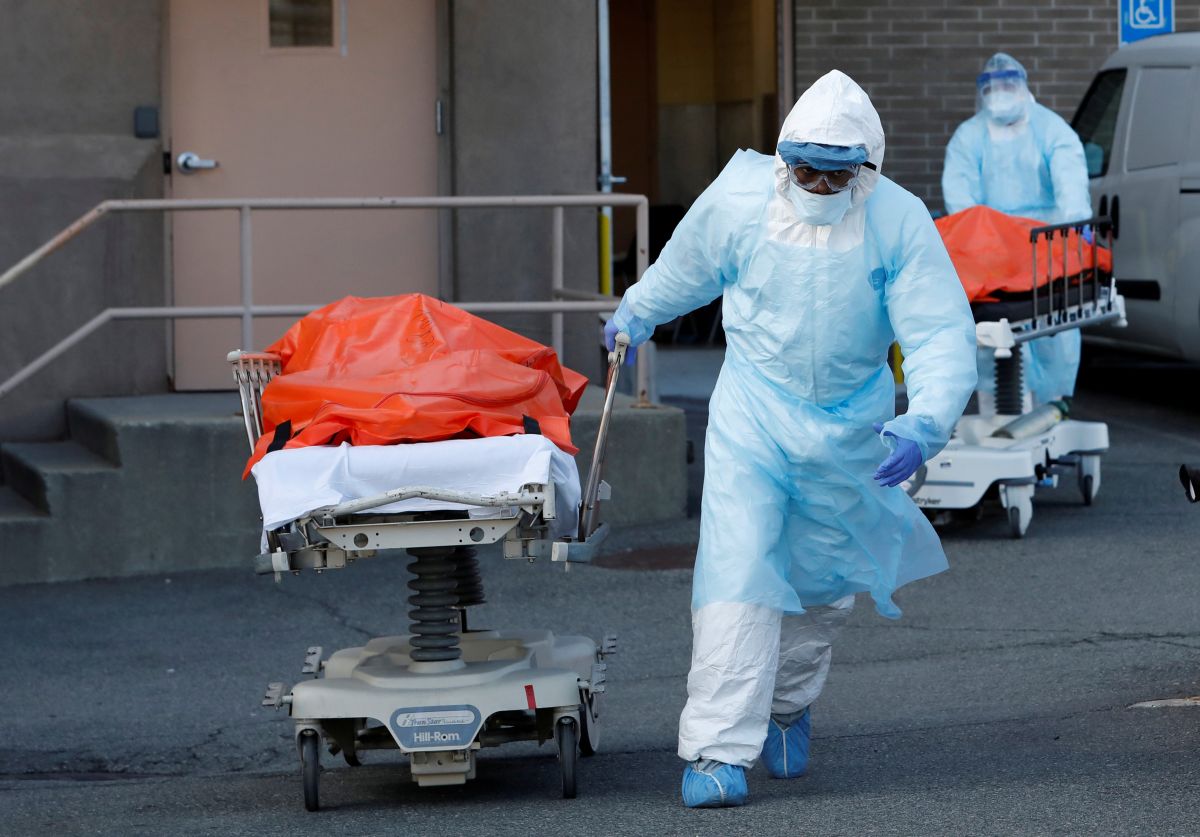 April 5 (Reuters) - The United States enters one of the most critical weeks so far in the coronavirus crisis with the death toll exploding in New York, Michigan and Louisiana and some governors calling for a national stay-at-home order.

New York, the hardest-hit state, reported on Sunday that, for the first time in a week, deaths had fallen slightly from the day before, but there were still nearly 600 new fatalities and more than 7,300 new cases. Places such as Pennsylvania, Colorado and Washington, D.C. are starting to see rising deaths.

Bodies of victims of COVID-19, the flu-like respiratory disease caused by the coronavirus, were stacked in bright orange bags inside a makeshift morgue outside the Wyckoff Heights Medical Center in Brooklyn, according to photos provided to Reuters.

New York Governor Andrew Cuomo said on Sunday that new hospitalizations had fallen by 50% over the previous 24 hours, but he cautioned that it was not yet clear whether the crisis was reaching a plateau in the state, which has a total of 4,159 deaths and more than 122,000 cases. (Graphic: https://tmsnrt.rs/2w7hX9T)

"The coronavirus is truly vicious and effective at what the virus does," Cuomo told a daily briefing. "It's an effective killer."

Once the peak of the epidemic passes, Cuomo said a mass rollout of rapid testing will be critical to help the nation "return to normalcy."

For now, some New York hospitals are scrambling to care for the flood of coronavirus patients. An email to staff by Columbia University Irving Medical Center in Manhattan, seen by Reuters, said they must all be ready to redeploy to handle such patients regardless of an employee's specialty. Those without approved exemptions for health or other reasons may be placed on unpaid leave or could be fired.

The hospital did not immediately respond to a request for comment on its message to staff.

U.S. Surgeon General Jerome Adams warned on Fox News Sunday that hard times were ahead but "there is a light at the end of the tunnel if everyone does their part for the next 30 days."

Most states have ordered residents to stay home except for essential trips to slow the spread of the virus in the United States where over 327,000 people have tested positive and more than 9,300 have died, according to a Reuters tally.

However, a few churches were holding large gatherings on Palm Sunday, the beginning of Holy Week in Christian churches.

"We're defying the rules because the commandment of God is to spread the Gospel," said Tony Spell, pastor at the Life Tabernacle megachurch in a suburb of Baton Rouge, Louisiana. He has defied state orders against assembling in large groups and has already been hit with six misdemeanors.

Louisiana has become a hot spot for the virus, on Saturday reporting a jump in deaths to 409 and more than 12,000 cases.

Governor John Bel Edwards told CNN on Sunday that the state could run out of ventilators by Thursday. Michigan Governor Gretchen Whitmer said on Fox News Sunday that a number of hospitals there were already at capacity and the state needed more ventilators, tests and personal protective equipment. She said the pandemic is "growing exponentially" in Michigan.

'IT COULD COME BACK'

White House medical experts have forecast that between 100,000 to 240,000 Americans could be killed in the pandemic, even if sweeping orders to stay home are followed.

President Donald Trump warned on Saturday that there were "very horrendous" days ahead.

Still, Wisconsin's Republican-controlled legislature decided to hold in-person voting for its presidential primary on Tuesday, when Democratic-led Colorado will also go ahead with local elections.

Washington state Governor Jay Inslee, a Democrat, whose state recorded the country's first confirmed COVID-19 infection but has since seen cases flatten after early action to shutter activity, said if other states do not also impose strict measures, the virus will simply circulate.

"It would be good to have a national stay-at-home order," he told NBC News' "Meet the Press" program. "Even if Washington gets on top of this fully, if another state doesn't, it could come back and come across our borders two months from now."

Republican Arkansas Governor Asa Hutchinson, however, defended his refusal to order statewide restrictions, saying the situation was being watched closely and that his more "targeted approach" was still slowing the spread of the virus.

Adams, the surgeon general, said governors who have not issued month-long stay-at-home orders should at least consider one for the upcoming week.

Kate Lynn Blatt, 38, a property manager from rural Pottsville, Pennsylvania, said she was astounded that her state's governor, Tom Wolf, waited until April 1 to issue a statewide stay-at-home order.

"We were shocked. I can't believe Trump hasn't issued a nationwide order and I still can't believe there are states that are still open," Blatt said.