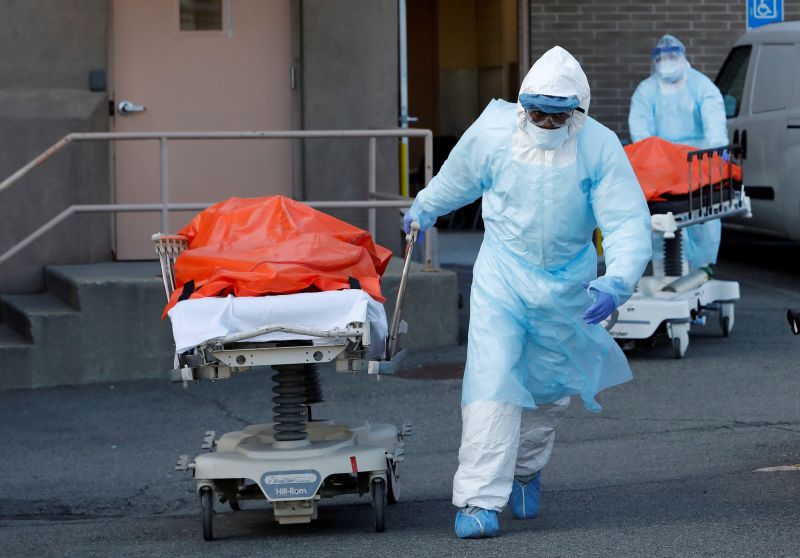 Healthcare workers wheel the bodies of deceased people from the Wyckoff Heights Medical Center during the outbreak of the coronavirus disease (COVID-19) in the Brooklyn borough of New York City, New York, U.S., April 4, 2020. REUTERS/Andrew Kelly

The United States is entering what a senior official warned on Sunday would be the "hardest" week of the coronavirus crisis as the death toll mounted, but some saw glimmers of hope from a slight slowing of fatalities in hard-hit New York.

New York, the epicenter of the U.S. coronavirus outbreak, reported on Sunday that for the first time in a week, deaths had fallen slightly from the day before. But there were still nearly 600 new fatalities and more than 7,300 new cases in the state.

Louisiana has become a hot spot for the virus, reporting a jump in deaths to nearly 500 and more than 13,000 cases. The governor predicted the state would run out of ventilators by Thursday.

Places such as Pennsylvania, Colorado and Washington, D.C., are also starting to see rising deaths.

"This is going to be the hardest and the saddest week of most Americans' lives, quite frankly. This is going to be our Pearl Harbor moment, our 9/11 moment, only it's not going to be localized," U.S. Surgeon General Jerome Adams warned on Fox News on Sunday. "It's going to be happening all over the country. And I want America to understand that."

New York Governor Andrew Cuomo said on Sunday that new hospitalizations had fallen by 50% over the previous 24 hours. He cautioned that it was not yet clear whether the crisis was reaching a plateau in the state, which has a total of 4,159 deaths and more than 122,000 cases, by far the most of any U.S. state. (Graphic: https://tmsnrt.rs/2w7hX9T)

Nationally, cases the respiratory disease topped 336,000, while the death toll stood at 9,573, according to a Reuters tally.

Cuomo said that once the peak of the epidemic passed, a mass rollout of rapid testing would be critical to help the nation "return to normalcy."

President Donald Trump said the country faced a "great hour of grief," but expressed hope that deaths could be “leveling off” in New York.

"We see light at the end of the tunnel. Things are happening," he told reporters.

Dr. Anthony Fauci, director of the National Institute of Allergy and Infectious Diseases and a member of Trump's coronavirus task force, said it took weeks for efforts like social distancing and stay-at-home orders to slow the virus' spread.

"What you're hearing about potential light at the end of the tunnel doesn't take away from the fact that tomorrow, the next day, are going to look really bad," Fauci told reporters.

Republican Arkansas Governor Asa Hutchinson defended his refusal to order statewide restrictions, saying the situation was being watched closely and that his more "targeted approach" was still slowing the spread of the virus.

Adams, the surgeon general, said governors who had not issued month-long stay-at-home orders should at least consider one for the upcoming week.

White House medical experts have forecast that between 100,000 to 240,000 Americans could be killed in the pandemic, even if sweeping orders to stay home are followed.

Oregon, which has reported around 1,000 cases of COVID-19, the disease caused by the novel coronavirus, said it was sending New York 140 ventilators, machines that help people breathe after the virus attacks their lungs. Washington is returning over 400 of the machines to the Strategic National Stockpile for hard-hit states like New York.

New York Mayor Bill De Blasio said the city had enough ventilators to get through Tuesday or Wednesday, and he was seeking between 1,000 and 1,500 more from federal and state stockpiles, which he estimated had 10,000 and 2,800, respectively.