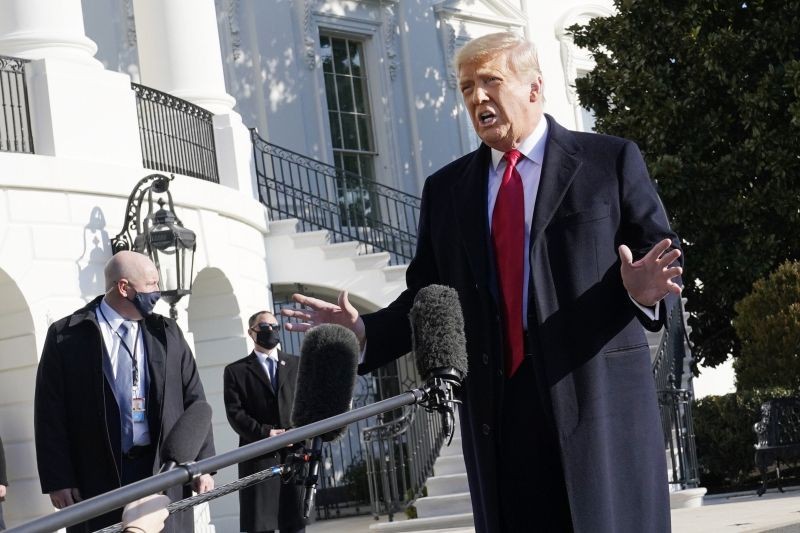 President Donald Trump talks to the media before boarding Marine One on the South Lawn of the White House on January 12, 2021 in Washington. (AP/PTI Photo)
World
13th January 2021

Washington, January 13 (PTI): The Democratic-controlled US House of Representatives, which is rushing ahead towards impeaching Donald Trump over the unprecedented Capitol Hill attack, has passed a resolution urging Vice President Mike Pence to invoke 25th Amendment to remove the president from office.

The resolution was voted by 223 to 205 votes on Tuesday night. The voting was mostly on party lines, with one Republican voting in favour of the resolution and another five abstaining. The resolution calls upon Pence to mobilise the Cabinet to activate the 25th Amendment to remove the president from office.

The 25th Amendment, adopted more than 50 years ago in the wake of President John F Kennedy's assassination, provides a mechanism for the succession of the president for his or her replacement in the event he or she proves unfit to serve. Under the amendment, the vice president and a majority of either the Cabinet or some other body designated by Congress may remove the president from office.

The vote came after Pence, a Republican, wrote to House Speaker Nancy Pelosi that he would not invoke the 25h Amendment.

Speaking on the House floor, Pelosi said on January 6, President Trump incited a deadly insurrection against America that targeted the very heart of its democracy, the US Capitol.

"Defiling the genius of the Constitution, separate but equal, attacking the first branch of government, trying to prevent the US from ascertaining the constitutional duty to ascertain that Joe Biden and Kamala Harris will be President and Vice President of the United States.

The gleeful desecration they have gleeful desecration of the Capitol and violence against the Congress, our staff and our workers are horrors that will forever stain our nation's history. Five Americans have died following the violent attack. More than 50 police officers were seriously injured, including fifteen officers who were hospitalised, Pelosi said.

She said the "facts are very clear" that the President called for the seditious attack.

As the dangers escalated, he ignored and flat out rejected the pleas of Congress, including those of his own party, to call off his supporters the rioters, the terrorists as they engaged in vandalism and violence. Later that day and, now, the President is saying that he is not responsible and that his incitement to violence was totally appropriate, she said.

Referring to the impeachment proceedings against him, Trump in a public speech on Tuesday in a Texas border town said free speech is under assault in the US like never before.

"The impeachment hoax is a continuation of the greatest and most vicious witch hunt in the history of our country and is causing tremendous anger and division...which is very dangerous for the USA, especially at this very tender time," he said.

Pelosi said Trump's actions demonstrate his absolute inability to discharge the most basic and fundamental powers and duties of his office.

The House of Representatives is expected to consider an article of impeachment against Trump on Wednesday, thus opening the possibility of Trump becoming the only president in US history to be impeached twice.

The articles of impeachment charges Trump with a count of 'incitement of insurrection' for his actions on January 6, when he delivered a speech inciting his supporters to lay siege to the Capitol, an action that temporarily halted the counting of Electoral College votes and resulted in the deaths of five individuals, including a police officer.

Earlier, the House Judiciary Committee Chairman Jerrold Nadler released a majority staff report for the impeachment of Trump. The 50-page report made a strong case to impeach the Republican president.

Trump has falsely asserted that he won the 2020 presidential election and repeatedly sought to overturn the results of the election. As his efforts failed repeatedly, he continued a parallel course of conduct that "foreseeably resulted in the imminent lawless actions of his supporters, who attacked the Capitol and the Congress", the report said.

The facts establish that he is unfit to remain in office a single day longer and warrant the immediate impeachment of President Trump, it said.

The House on December 18, 2019 had approved the articles of impeachment against Trump, charging him of pressuring Ukraine to smear Biden, using nearly USD 400 million in military aid as leverage. However, the Republican-controlled Senate in February 2020 acquitted him of the two charges -- abuse of power and obstruction of Congress.