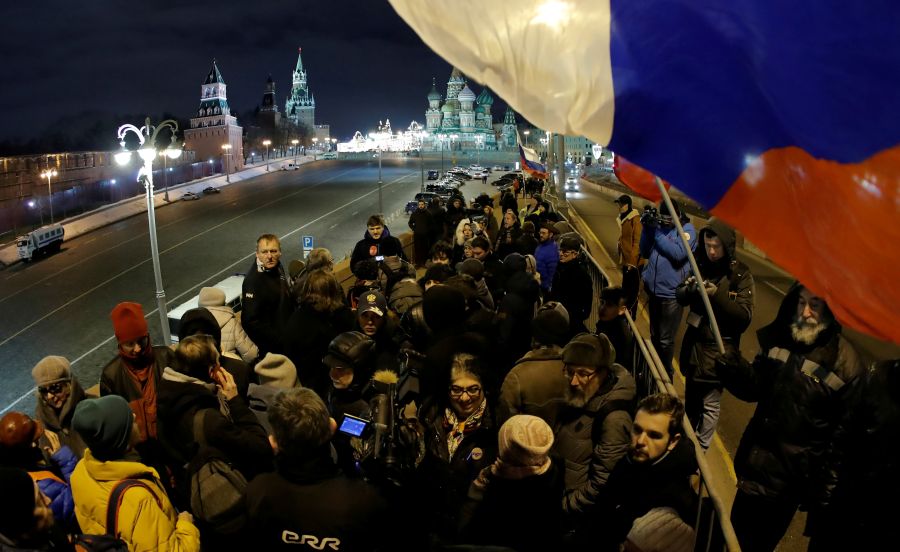 People gather at the site of the assassination of politician Boris Nemtsov while marking the fourth anniversary of Nemtsov's death in central Moscow, Russia on February 27, 2019. (REUTERS File Photo)

MOSCOW, February 27 (Reuters): The United States embassy in Moscow urged Russia on Thursday to find the people who organised the murder of opposition politician Boris Nemtsov who was gunned down near the Kremlin five years ago.

Nemtsov, one of President Vladimir Putin's most vocal critics, was killed in 2015 as he walked home across a bridge near the Kremlin's walls. He had been working on a report examining Russia's role in the conflict in Ukraine.

Russia jailed a man in 2017 for 20 years for the murder and handed down terms of between 11 and 19 years to four other men convicted of being his accomplices.

But the late politician's allies, who are due to hold a commemorative march in his memory in the Russian capital this weekend, have criticised the investigation for failing to identify the people who ordered the killing.

Bart Gorman, charges d'affaires at the U.S. embassy in Moscow, was one of several foreign diplomats on Thursday who paid their respects at the bridge and laid flowers.

"...We again call on Russian authorities to investigate those who organised and ordered this horrific crime," U.S. embassy spokeswoman Rebecca Ross wrote on Twitter.

Nemtsov "remains an inspiration to all who strive for justice, democracy, and a government accountable to the people", she wrote.

Czech authorities said earlier this month they would rename the square in Prague where Russia's embassy is located after Nemtsov.