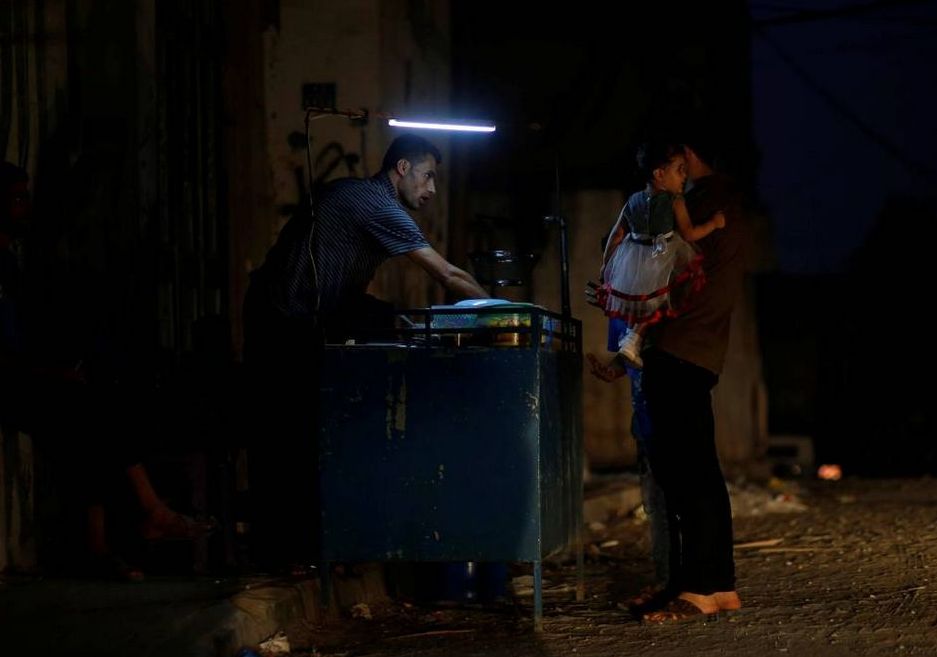 A Palestinian man sells falafel as he uses a battery-powered light during power cut in the northern Gaza Strip August 26, 2019. REUTERS/Mohammed Salem

About 30,000 of Gaza's population have tried to flee war and poverty to a new life elsewhere - but many have died on the journey

GAZA, August 30 (Reuters) - Shaban Khalaf's advice to any other Gazans thinking of heading to Europe in search of a better life, as he did, is blunt: don't bother - it's not worth the danger and the expense.

Khalaf should know. Despairing of ever finding a decent job in Gaza, where the economy is near collapse, the journalism graduate flew to Turkey via Egypt in June 2018 and tried no fewer than 18 times to cross into Europe, mostly by boat.

"One time a naval boat hit ours, our boat flipped and we almost died," said Khalaf, 25, adding that each time Turkish or Greek authorities would send them back to Turkey's shores.

By February this year he had given up and returned home to Gaza, much poorer for his ordeal after having paid off the people smugglers who had tried in vain to get him to Europe.

"I don't advise people to leave unless a job is waiting for them there. It is better to stay and die with their families in Gaza than to throw themselves into the unknown, or die in the sea," he said.

Thousands of other Palestinians have had similar experiences as they try to escape the rampant unemployment, poverty and violence of life in Gaza, a tiny enclave between Israel and Egypt run by the Islamist Hamas group.

Gazans have endured three war with Israel, 12 years of Israeli-led economic sanctions that hamper the movement of people and goods and a protracted power struggle between Palestinian factions.

An unknown number of Gazans have died trying to make the perilous crossing to Europe, leaving families back home unsure about their eventual fate. Some are buried in Turkey or in Greece, or were returned home in coffins.

Human rights activists in Gaza believe around 30,000 of Gaza's population of two million have tried to leave the 145 sq. mile (375 sq. km) territory in the past decade, with a surge in numbers after a 50-day war in 2014 between Israel and Hamas.

"NO WORK, NO FUTURE"

Israeli air strikes and shelling devastated entire districts of Gaza in that conflict, as Hamas and other militant groups launched rockets at heartland cities in Israel, which along with Egypt maintains a blockade of Gaza, citing security concerns.

More than 2,100 Palestinians, mostly civilians, were killed, according to Gaza health officials, while Israel put the number of its own dead at 67 soldiers and six civilians.

"Israel is the prime source of our misery but (internal Palestinian) division is a main reason too," Khalaf said, referring to economic sanctions imposed by the Western-backed Palestinian Authority to pressure Hamas to share power.

Hamas seized Gaza during fighting in 2007.

"Because of the division there is no work for youth. Most of those who left Gaza were graduates," Khalaf told Reuters at a language centre in Gaza where he is studying Turkish.

Khalaf said his journey from Gaza cost $3,000, including fees to enter Egypt, a ticket to Turkey and payment to smugglers who tried to take him to Greece while hiding from drones and security patrols.

Greece is a common first stop for Palestinians and others hoping to apply for asylum in the European Union, but EU countries and Turkey have significantly tightened border controls to deter migrants.

But many young Palestinians are unlikely to heed Khalaf's advice to stay put.

"There is no work, there is no future (here)," said Sameh Sdodi, 27, who had to skip university to sell snacks and hot drinks near the beach.

Karim Abu Sidu, 17, said he was ready to attempt the journey in search of work even though his 22-year-old brother, Hussam Abu Sidu, died in January when his boat sank off Greece. His body is buried in Greece.

"The situation here is very bad," he said. "Even if I finished university, it would be in vain. Those who did are now selling tea, coffee and cigarettes in markets."