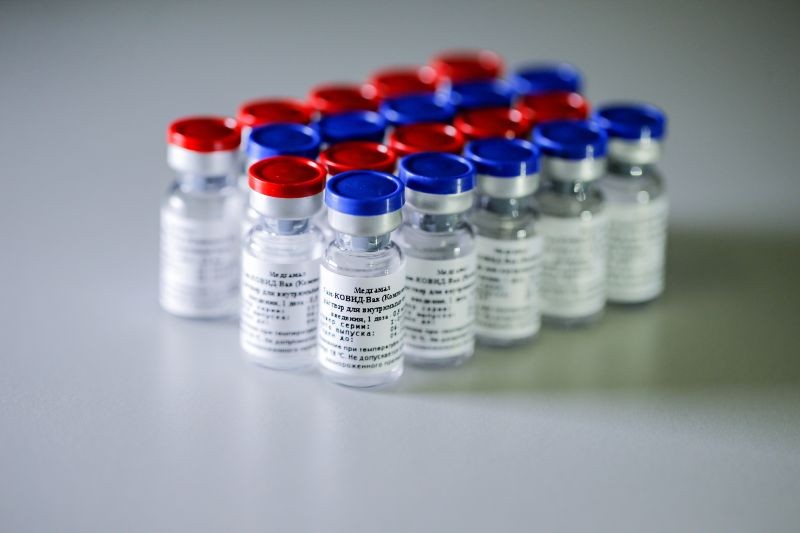 A handout photo provided by the Russian Direct Investment Fund (RDIF) shows samples of a vaccine against the coronavirus disease (COVID-19) developed by the Gamaleya Research Institute of Epidemiology and Microbiology, in Moscow, Russia on August 6, 2020. (REUTERS Photo)
World
12th August 2020

Russia's granting of regulatory approval to a COVID-19 vaccine after less than two months of human testing has prompted expressions of caution as well as interest from around the world.

Moscow said on Wednesday that the first batch of the vaccine would be ready for some medics within two weeks and rejected safety concerns as "groundless".

Here is a summary of the reaction:

Israel will examine Russia's COVID-19 vaccine and enter negotiations to buy it if it is found to be a "serious product", Israel's health minister said.

Philippine scientists were set to meet representatives of the Russian research facility that developed the vaccine on Wednesday, to discuss possible participation in clinical trials and access to its research data.

Brazil's Parana state governor Ratinho Junior was expected to meet the Russian ambassador to Brazil on Wednesday to discuss the terms of an agreement to produce the vaccine. But it was unclear if the state's research institute would get regulatory approval in Brazil.

The World Health Organization and Russian health authorities are discussing the process for possible WHO prequalification, a WHO spokesman said on Tuesday.

"Prequalification of any vaccine includes the rigorous review and assessment of all required safety and efficacy data," WHO spokesman Tarik Jasarevic told a U.N. briefing in Geneva, referring to clinical trials.

Jarbas Barbosa, assistant director of the WHO's regional branch, the Pan American Health Organization, was asked on Tuesday about potential production of the vaccine in Brazil. He said that should not be done until Phase 2 and 3 trials are completed to guarantee its safety and effectiveness.

European health experts said that with no full trial data, the vaccine would be hard to trust.

German Health Minister Jens Spahn said the vaccine had not been sufficiently tested, adding the aim was to have a safe product rather than just being first to start vaccinating people.

Mexico's coronavirus czar, Deputy Health Minister Hugo Lopez-Gatell, said he was surprised by the Russian announcement and the government would wait for more information.