Would love to help: Trump on India-China border row 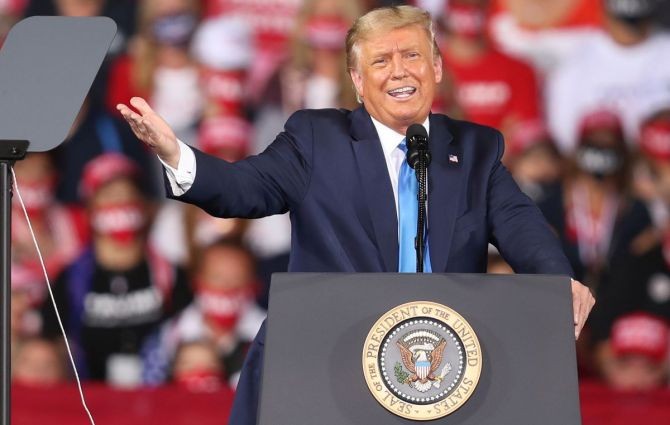 New Delhi, September 25 (PTI): United States President Donald Trump hoped that India and China would be able to resolve their current border disputes as he reiterated his offer to help the two Asian giants.

"I know that China now, and India, are having difficulty, and very very substantial difficulty. And hopefully, they will be able to work that out," Trump told reporters at the White House.

The US president's remarks in this regard come days after senior Indian and Chinese military commanders held talks aimed at resolving the months-long standoff along the Line of Actual Control in Ladakh. The two countries agreed to stop sending more troops to their disputed border in the Himalayas.

Meanwhile, The Wall Street Journal reported that the border conflict is pushing India to look for an asymmetric response: flexing its naval might.

"India is intensifying joint naval manoeuvres with the US and its allies while building new ships and setting up a network of coastal surveillance outposts that would allow New Delhi to keep an eye on the Indian Ocean's maritime traffic," the newspaper said.

A "Grand Tamasha" podcast with senior fellow and director of the South Asia Program of Carnegie Endowment for International Peace, eminent American expert on India and South Asia Ashley Tellis said the Trump administration has taken a very transparent position of support for India in this crisis.

"And, of course, it is motivated in part by the opportunities to confront China on a grander scale, which sort of makes it part and parcel of the US's own bilateral problems with China. But I think there is something more going on here. And the more is that I do not think the United States had the alternative of doing otherwise.

"That is, Chinese aggression in this instance has been so blatant that the United States could not stand by and either ignore it or not come to India's defence," said Tellis, the Tata Chair for Strategic Affairs.

"What are the issues here? We all agree that those borderlands along the Himalayan territories are undefined. We all agree that they should be negotiated, delimited, demarcated through a peaceful process. We all agree that the agreements that China and India have repeatedly reached among themselves since the 1990s actually offer a good enough framework for how to resolve this dispute over the long term," he added.

What China has done is that it has thrown all those understandings overboard, Tellis said.

"And it is very important to recognise this that whatever the provocations may have been, the provocations created by Article 370 or whatever, I do not think they justified a reaction of this kind. Because a diplomatic provocation should have, you know, elicited a diplomatic response, rather than a quick jump to military action, which has enormous risks.

"By China taking the step to move quickly to military action, which has now resulted in loss of lives, I think it has put itself on the opposite side of the United States, which is arguing more loudly than ever for a rules-based community," he added.

"And so, even beyond the Trump administration's own bilateral problems with China, I think they were left in absolutely no position but to support India on this count and I think even a Democratic administration would have done the same in these circumstances," Tellis said.