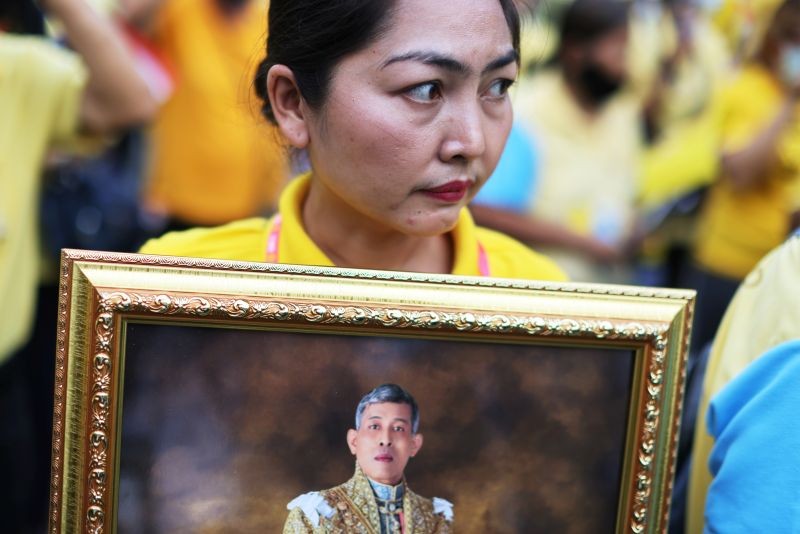 A royalist wearing a yellow shirt holds a picture of Thailand's King Maha Vajiralongkorn during an event to support the monarchy in Bangkok, Thailand, October 27,2020. (REUTERS Photo)
World
27th October 2020

BANGKOK, October 27 (Reuters): More than 1,000 yellow-shirted Thai royalists demonstrated in support of King Maha Vajiralongkorn on Tuesday, close to where thousands of people marched a day earlier to demand reforms of the monarchy.

Youth and student-led protests began in Thailand in July to call for the resignation of Prime Minister Prayuth Chan-ocha - a former army ruler - and a new constitution, but have increasingly sought curbs on the monarchy's powers.

"We want to show support and encouragement to his majesty," said Thatchapan Boriphet, 57, at Lumphini Park in central Bangkok. "I am neutral politically but I cannot stand it when there is a violation of the monarchy."

So far, royalist demonstrations have been considerably smaller than the tens of thousands of people who have joined the biggest protests against the government.

Protesters have accused he king of political involvement and marched to the German embassy on Monday to seek an inquiry into whether he exercised his powers during long stays in Germany, something Berlin has said would be unacceptable.

The palace has a policy of not commenting to the media and has made no comment since the start of the protests.

The king is currently in Thailand.

Royalists took heart at the weekend when the king lauded as "very brave" a man who had defied protesters by holding up a picture of the late King Bhumibol Adulyadej, but the reaction of protesters has been scathing.

Prime Minister Prayuth has ignored demands to quit and said the crisis should be discussed in parliament, where his supporters are in the majority, during an emergency session on Monday and Tuesday this week.

Opposition parties told him he should step down for the good of the country and stop using his proclaimed support for the monarchy as an argument to keep power.

Prayuth's opponents say he only kept power at elections last year thanks to electoral rules and a constitution drawn up by the junta he headed after a 2014 coup. He says that the ballot was fair.