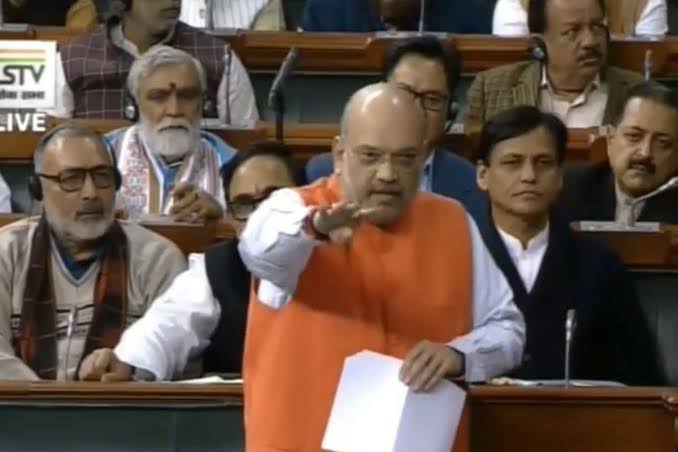 New Delhi, December 9 (IANS) The government on Monday introduced the controversial Citizenship (Amendment) Bill, 2019 in the Lok Sabha despite objections raised by the Opposition, calling it "fundamentally unconstitutional" and in "violation" of Article 14 of the Constitution.

Following over an hour's debate on the Bill's legislative competence if it can be taken or not, the House allowed it after division of votes with 293 in its favour and 82 against.

Introducing the Bill, Union Home Minister Amit Shah rejected allegations of opposition members, saying: "I assure that the Bill does not violate any article of the Constitution and that no citizen will be deprived of one's rights.

"Every citizen has been given a place in the Bill on the basis of reasonable classification."

The Minister said that the Bill has been introduced after analyzing the constitution of Pakistan, Afghanistan and Bangladesh.

Referring to the Nehru-Liaquat Ali Khan agreement signed in 1950 after the partition of India and Pakistan, Shah said it was agreed to protect the rights of minorities, but only India followed it. Hindus, Christians, Sikhs, Parsis, Jains and Buddhists faced atrocities in Pakistan, Afghanistan and Bangladesh.

"The Bill is for those minorities who faced religious persecution in Pakistan, Afghanistan and Bangladesh," Shah said.

The Minister clarified as Muslim community was not persecuted in the three Islamic countries, the Bill specifically mentions to provide citizenship to six religious persecuted minorities.

"The people of the six minority communities who migrated to India following religious persecution in Pakistan, Bangladesh and Afghanistan will be given Indian citizenship as per this Bill. They are being given citizenship on the basis of reasonable classification. The Bill does not violate Article 14 of the Indian Constitution."

But, Shah said, the Bill is not against Muslim community and that if any Muslim seeks citizenship in India based on rules, he will be entertained as per the Article of the Bill.

As per the Bill, those illegal migrants who have entered India up to the cut-off date of December 31, 2014 to seek shelter, and continued to stay here even if their travel documents expired or they have incomplete or no documents, will be eligible for Indian citizenship.

Under the existing provisions of the Act, migrants from Hindu, Sikh, Buddhist, Jain, Parsi or Christian communities from Afghanistan, Pakistan or Bangladesh who entered India without valid travel documents or if the validity of their documents has expired are regarded as illegal migrants and ineligible to apply for Indian citizenship under section 5 or section 6 of the Act.

The Centre exempted these migrants from the adverse penal consequences of the Passport (Entry into India) Act, 1920 and the Foreigners Act, 1946 and rules or orders made there under vide notifications, dated September 7, 2015 and date July 18, 2016.

Subsequently, the Centre also made them eligible for long-term visa to stay in India as per orders dated January 8, 2016 and September 14, 2016.

Now, the government, through the Bill, proposes to make these migrants eligible for Indian citizenship.

"For this purpose the Central Government or an authority specified by it, shall grant the certificate of registration or certificate of naturalisation subject to such conditions, restrictions and manner as may be prescribed," Shah said.

"Since many of them have entered India long back, they may be given the citizenship of India from the date of their entry in India if they fulfil conditions for Indian citizenship specified in section 5 or the qualifications for the naturalisation under the provisions of the Third Schedule to the Act."

The Bill further seeks to grant immunity to the migrant of the six communities so that any proceedings against them regarding in respect of their status of migration or citizenship does not bar them from applying for Indian citizenship.

The Bill proposes the migrants of the six minority communities of the three countries will be eligible for citizenship by naturalisation if they can establish their residency in India for five years instead of the existing eleven years.

It is also proposed in the Bill to empower the Central government to cancel registration as Overseas Citizen of India Card holder in case of violation of any provisions of the Act or any other law for the time being in force.

The Bill further seeks to protect the constitutional guarantee given to indigenous populations of northeastern states covered under the Sixth Schedule to the Constitution and the statutory protection given to areas covered under "The Inner Line" system of the Bengal Eastern Frontier Regulation, 1873.

Objecting to the introduction of the Bill, leader of the Congress party, Adhir Ranjan Chowdhury, said he did not have any qualms in describing the Bill as a regressive which is against minorities of the country.

"It is a very unconstitutional legislation," he said, adding the concept of citizenship cannot be read in isolation but in alignment with various provisions that guarantee fundamental rights without any discrimination on the basis of religion.

TMC's Saugata Roy recalled that the Home Minister had said in Parliament at the time of abrogation of Art 370 from Jammu and Kashmir that it will be "one law, one nation" in the country but now "you are bringing a law which is different for different religions and regions".

"The Bill is divisive and unconstitutional and is in violation of Art 14 which provides for equality to all citizens," he added.

Congress's Shashi Tharoor said the Bill was an assault on the fundamental rights of the people of the country as religion was the determinant of the legislation.

AIMIM's Asaduddin Owaisi (Muslim Majlis) said secularism is the basic structure of the Consitution and the Bill was arbitrary in nature and was in violation of fundamental rights.

"The Home Minister should be prevented from carrying out this enactment. Otherwise, he will be compared with David Ben-Gurion, the founder of the Jewist state of Israel, and Hitler.

He said he was sure the courts will strike down this law.

P.K. Kunhalikutty and E.T.A Mohd Basheer of IUML said Muslims were being discriminated against and the Bill was unconstitutional.

Shah said the Bill does not name Muslims, but Kutty said it was only being technically correct, but the message was Muslims will not be given citizenship.