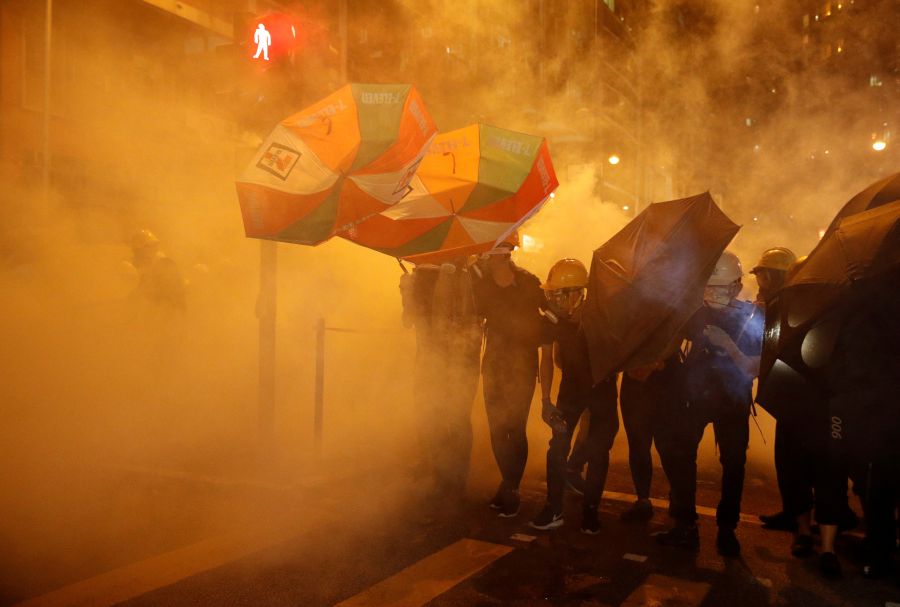 HONG KONG, August 21 (Reuters): A major bank warned on Wednesday that weeks of protests in Hong Kong could hit the economies of the Chinese-ruled city and mainland China itself as demonstrators headed for a sit-in at the subway site of a mid-summer mob attack.

Hong Kong-based Bank of East Asia Ltd (BEA) posted a 75% slump in first-half net profit after it wrote down loans in China because of a downturn in commercial property markets outside China's top cities.

It also warned that social unrest in Hong Kong and a trade dispute between China and the United States could affect the economies of China and the former British colony.

"The tense atmosphere (in Hong Kong) is likely to weigh on consumer and business confidence, and on in-bound tourism, if there is no resolution soon," it said in a statement.

Some Hong Kong companies have been dragged into controversy after 11 weeks of sometimes violent clashes between police and pro-democracy protesters, angered by a perceived erosion of freedoms.

BEA and its rivals have closed branches in the vicinity of protests on a number of separate occasions.

"The recent situation in Hong Kong causes signs of concerns for the local SMEs (small and medium-sized enterprises)," bank co-chief executive Adrian Li told reporters. "It is because you see that if the current condition continues, (it) shall affect tourism, retail trade as well as investors' confidence. Nevertheless, our Hong Kong asset quality remains very healthy."

Protesters were preparing to gather on Wednesday at the suburban Yuen Long mass-transit rail station, one of a series of running demonstrations over 11 weeks that have sometimes turned violent, including the storming of the legislature and havoc at the airport.

On the night of July 21, about 100 white-shirted men stormed the station hours after protesters marched through central Hong Kong and defaced China's Liaison Office - the main symbol of Beijing's authority over the city.

Anger erupted in June over a now-suspended bill that would allow criminal suspects in Hong Kong to be extradited to mainland China for trial. Hong Kong leader Carrie Lam said again on Tuesday the legislation was dead.

But the unrest has been fuelled by broader worries about the erosion of freedoms guaranteed under the "one country, two systems" formula put in place after Hong Kong's return to China in 1997, including an independent judiciary and the right to protest.

In the most recent cause for concern, a Chinese national working at Britain's Hong Kong consulate has been detained in China's border city of Shenzhen for violating the law, likely worsening already strained ties between Beijing and London.

The protests have prompted sharp reactions from Beijing, which has accused foreign countries, including the United States, of fomenting unrest. China has also sent clear warning that forceful intervention is possible, with paramilitary forces holding drills in neighbouring Shenzhen.

Speaking to CBS This Morning, Pompeo highlighted weekend remarks by President Donald Trump warning against a crackdown like Beijing's suppression of pro-democracy protests in Tiananmen Square in 1989. Trump said this would make reaching a deal he has been seeking to end a trade war with China "very hard".

Chinese Foreign Ministry spokesman Geng Shuang declined to comment directly on the Twitter and Facebook actions, but defended the right of Chinese people to make their voices heard.

The protests are already exacting a toll on Hong Kong's economy and tourism, with the Asian financial hub on the verge of its first recession in a decade.

"Recent events in Hong Kong over the past two months did not substantially impact our passenger business in July," Cathay Pacific Chief Customer and Commercial Officer Ronald Lam said. "However, we anticipate a much more significant impact to our revenue in August and onwards."

Aside from seeking Lam's resignation, demonstrators have five demands - complete withdrawal of the extradition bill, a halt to descriptions of the protests as "rioting", a waiver of charges against those arrested, an independent inquiry and resumption of political reform.