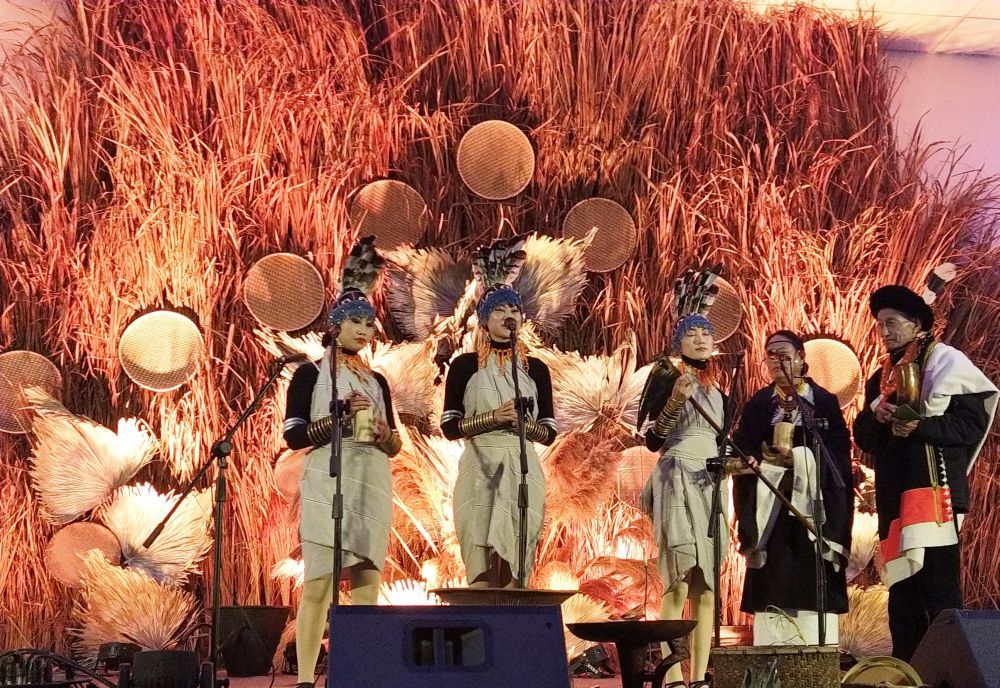 Bringing back the warmth of sitting around a Naga Kitchen hearth, listening to grandparents sing songs and narrate stories of old that were passed on from generation to generation, Tetseo Sisters, in its ongoing first-ever Hornbill Box Office Show, are taking its audience to an entirely different era, set in the rural Naga world and rippling with songs and tradition.

The engrossing one-hour show begins with a cow herder song of their grandmother, who, as a young girl tended to cattle and talks about how even in the dark woods or dark moments, if you have a song, you'll never be alone.' This is followed by song that celebrates the strength, demeanour and personality of a woman. "The Chakhesang women would keep their hair short until they were married and what was celebrated were these qualities", Mercy Tetseo highlighted.

Also with their parents, who, the sisters said are the source of these songs for them, they are joined by the parents on stage, showcasing how after a day’s work, our forefathers come back home and sing together. Then comes a song about first love and cherry blossoms that tells the story of an old woman, who was reminded of her very first love and of the days when love was ripe and beauty was hers and it caught many eyes.

There is also a song about Tati, a single stringed instrument which the Tetseo Sisters highlighted is a gift from our ancestors. Azi, the second Tetseo sister who is married and has two sons, says, "I am teaching my boys the same songs that we learnt as children" while emphasizing that "we have to carry forward the legacy and pass it down."

Another highlight of the show was one of the first folk songs that they learnt and talks about "how when you are having a great time with your friends and loved ones you don't know how time passes." The box office show also features the song "As we go". Their only brother Mhaseve was part of the show including Wati on Percussion and Khyochano on the piano.

After a splendid one-hour show, the audience are sent off with a clove of garlic signifying how in the olden times, whenever Naga people set out for war or hunting, they are accompanied by a clove of garlic. "We hope you will be kept safe from all harm and go back to your place and tell people about us", the sisters expressed.

The show will go on till December 9, 2019 and is supported by Task Force for Music & Arts (TaFMA) in association with Government of Nagaland and Nagaland Tourism. Managed by imagi.NATION, there are two shows in a day, one at 2:00 pm and the other at 6:00 pm.